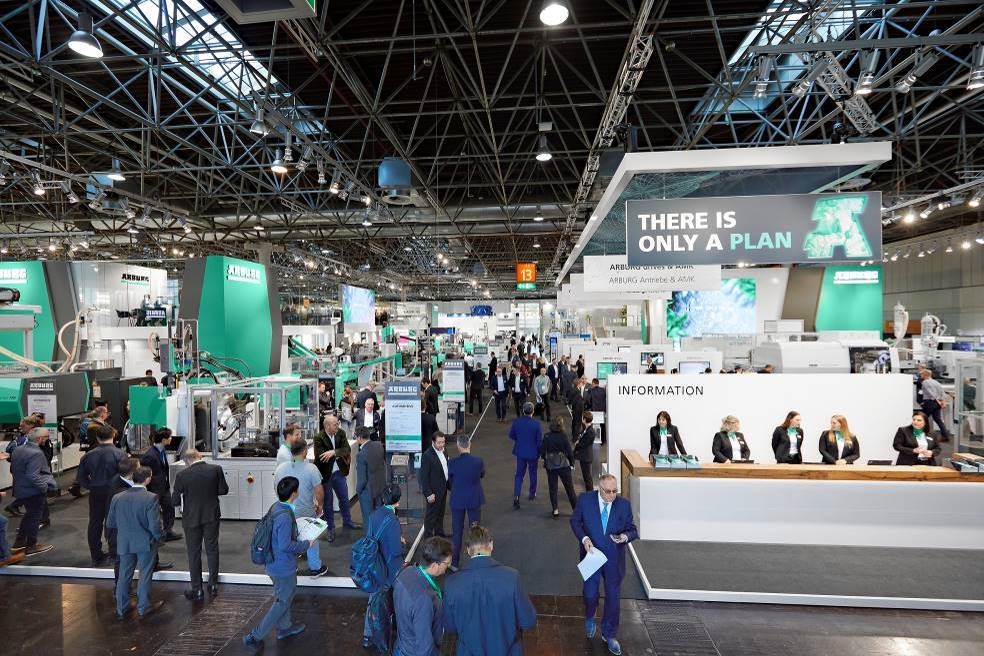 A complete success: Arburg makes an impressive showing with “Plan A” at K 2022, the world’s leading trade fair 

“There is only a Plan A”: Arburg clearly hit the bull’s eye with this message at the world’s leading trade fair, K 2022, in Düsseldorf, Germany – inspiring countless trade fair visitors in the process. A total of around 30 machine exhibits on its main stand, in the arburgGREENworld pavilion in the VDMA Circular Economy Forum, and on partners’ stands showcased sophisticated applications and technologies in injection moulding, additive manufacturing and automation. Sustainability, digitalisation and resilience were the topics that took centre stage.

“We experienced a huge footfall at our main stand 13A13 and the arburgGREENworld pavilion in the VDMA Circular Economy Forum. We are very much satisfied with the quantity, quality and internationality of the visitors, especially in view of the current conditions,” said Juliane Hehl, Managing Partner responsible for Marketing and Business Development, summing up the company’s successful trade fair appearance. “At K, we gave an impressive demonstration of where the journey is headed.”

“As a machine manufacturer, we are vigorously pursuing a strategy towards greater resource efficiency, CO2 reduction and circular economy. This is an important issue for our customers worldwide, and one that we are bringing to life,” said Gerhard Böhm, Arburg Managing Director Sales and Service. Among the items on show was a demonstration of how PIR and PCR recyclates can be processed into high-quality products with the help of hardware and software together with the new “aXw Control RecyclatePilot” and other smart controller functions. One such product was a tool case in Arburg design, probably one of the most coveted give-aways at the entire trade fair.

Visitors to the arburgGREENworld pavilion were able to gain an impressive insight into how Arburg, with its “Plan A”, is playing its part in solving a global problem affecting society as a whole. It was there that Arburg trainees not only “rocked” the pavilion but also held numerous discussions on the future of plastics as a recyclable material – with young visitors in particular. Talks were also held with experts from science and industry. And an electric Allrounder produced “Greenline” anchors from Fischer using plastic based on castor oil.

At its main stand 13A13, Arburg presented a wide range of sophisticated applications and innovative technologies from its entire portfolio: injection moulding machines, additive manufacturing, automation, plus internally developed control systems, drive trains and digital products and services. “We offer our customers everything they need not only to work in an energy- and production-efficient way in these challenging times, but also to strengthen resilience in the long term,” explained Guido Frohnhaus, Arburg Managing Director Technology & Engineering.

One highlight in terms of injection moulding and mould technology was an automated three-component Allrounder Cube 1800, which produced a functional component from PP, TPE and POM using an 8+8+8-cavity cube mould including new index turning technology from Arburg’s partner Foboha. The challenging assembly process took place in the gripper of the associated six-axis robot.

Another application that attracted a lot of interest was an all-electric packaging application. As an alternative to thermoforming, an Allrounder 720 A with a new 1300 electric injection unit and in the new “Ultimate” performance variant produced thin-walled IML cups with a wall thickness of only 0.37 millimetres using the injection compression moulding process, achieving an injection speed of up to 400 millimetres per second.

Together with its mould partner Braunform, Arburg used a two-component Allrounder More 1600 to demonstrate how time and costs can be saved by integrating functions, with Luer connectors made of PP and TPE as an example. Capping and unscrewing took place directly in the mould. Handling was carried out by a Yaskawa six-axis robot, which Arburg will add to its automation range from spring 2023 as it becomes a system integrator.

On show as an example of particularly compact automation without additional floor space was an interlinked turnkey system based around a vertical Allrounder 375 V, which produced a bicycle tool called a “tyre lever” from PIR recyclate. Handling and “ready-to-use” assembly were carried out by a suspended six-axis robot. The Arburg Turnkey Control Module (ATCM) ensured 100 percent traceability in this application.

An example of the future of digital production cells was the “smart” turnkey system based around a hybrid Allrounder 630 H. The injection moulding machine produced blood tubes from PET and communicated with the mould, hot runner controller, material dryer and automation via the Gestica control system and OPC UA. The “Moldlife Sense” computer system integrated into the 32-cavity mould provided by Arburg’s partner Hack, also enabled monitoring across the complete life cycle.

In the “Digital Center” exhibition area, Arburg gave a very hands-on demonstration of digital products and services for the injection moulding world. In addition to the Arburg host computer system and Remote Service ALS, a large number of features for the arburgXworld customer portal were presented. New to the MachineCenter app is the digital product passport, for example, which indicates the carbon footprint of each machine’s manufacture. Another new feature is a machine comparison tool in the MachineFinder app, which has been expanded to include equipment options.

Visitors could see for themselves just how much transparency the MachineTerminal app offers. Each exhibit was equipped with an iPad, which could be used to access information such as current production figures.

The Freeformer 750-3X celebrated its world premiere at K 2022. The latest machine for Arburg Plastic Freeforming (APF) is systematically designed to meet the requirements of the industry. Compared to the previous model, the part carrier is around 2.5 times larger – with the same external dimensions. The APF process is also around seven times faster and more economical.

Another exhibit, a high-temperature Freeformer 300-3X, demonstrated the production of complex components from original material Ultem 9085 and a new break-away support material. The additive manufacturing portfolio was supplemented with two exhibits from Arburg’s sister company innovatiQ, including the new TiQ2 for entry into filament-based industrial 3D printing.

An international sales and service network ensures first-class customer support at a local level: Arburg has its own organisations at 34 locations in 25 different countries and, together with its trading partners, is represented in more than 100 countries. Its machines are produced at the company’s German headquarters in Lossburg. Of a total of roughly 3,600 employees, around 3,000 work in Germany. About 600 further employees work in Arburg’s organisations around the world. Arburg has triple certification, in accordance with ISO 9001 (quality), ISO 14001 (environment) and ISO 50001 (energy).