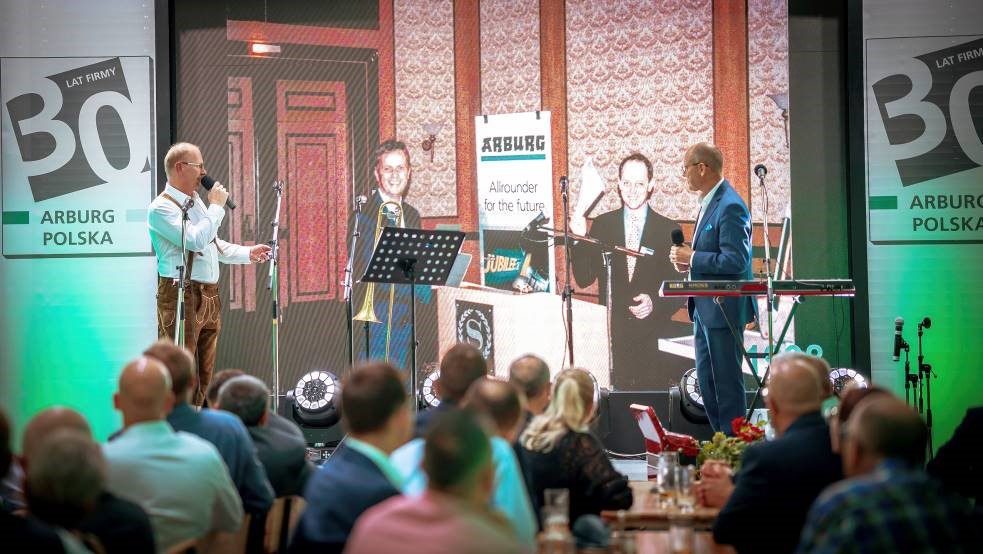 On 15 September 2022, the Arburg subsidiary in Poland celebrated a round anniversary: its 30th year in business. Konrad Szymczak, Managing Director of Arburg Poland, greeted the 80 or so guests. The “Oktoberfest”-themed celebrations looked back at 30 successful years, with speeches and entertaining photo shows taking centre-stage.

“Today we are delighted to celebrate 30 years of Arburg Poland with our customers, partners, and employees,” said Konrad Szymczak. On behalf of Arburg headquarters in Germany, Silvia Bednar, Sales Representative for Poland, congratulated the subsidiary on its anniversary. Guests of honour included Dr. Sławomir Śniady, who was Managing Director of the subsidiary for 25 years, and Marek Zembrzuski, who held the role of authorised signatory at Arburg in Poland for 29 years. In his speech, Dr. Sławomir Śniady expressed his gratitude for the many years of cooperation. Together with Konrad Szymczak, Marek Zembrzuski looked back over the successful history of Arburg Poland.

Around 80 guests came to the “Oktoberfest”-themed anniversary celebrations. Our technology was not neglected either: an electric Allrounder 570 A with Gestica control system manufactured brushes from polypropylene live. A special highlight of the celebrations were photo shows that brought back memories of the subsidiary’s milestones over the decades, and of previous trade fairs and customer events.

Development in Poland: From zero to a hundred

30 years ago the name Arburg and the Allrounders were not very well known in Poland. At first, we sold used machine there, but then, pretty quickly, new machines as well. The subsidiary developed very well and Arburg continuously gained more market share. The construction of the Arburg Technology Center (ATC) in Warsaw, which the company moved into in 2016, marked an important milestone. With a usable floor space of 800 square metres, it offers every opportunity to provide customers with first-class and comprehensive support. Still today, the services range from the expert hotline and Application Technology consultation, through the spare parts warehouse and the showroom, to training.