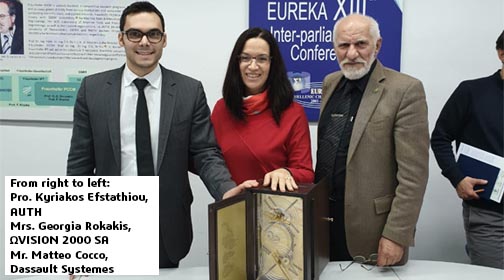 Dassault Systèmes has partnered with its value-added reseller ΩVISION 2000 SA, to support the Aristotle University of Thessaloniki to further explore and develop the Antikythera Mechanism under the guidance of Professor Kyriakos Efstathiou, Laboratory for Machine Tools and Manufacturing Engineering, Department of Mechanical Engineering and head of the Research Team for the Antikythera Mechanism at Aristotle University of Thessaloniki.

The Antikythera Mechanism is the first analog computer in human history.  It was built during the 2nd century B.C and found only on 1900 AD at the bottom of the Mediterranean sea off the small Greek island of Antikythera.  It was revealed in a very bad condition, broken in several calcified fragments. Its construction, functions and usage remained a mystery until recently.  After researches and historical studies, it was discovered that it was an extremely advanced mechanism that could be used to calculate and predict astronomical events.

Detailed studies of the Mechanism, have shown that it could predict with astonishing accuracy the position of the Sun, the Moon and probably the planets in the sky.  It could also determine the phases of the Moon, adjust the calendar, determine the dates of the ancient Panhellenic Games (ex; Olympic Games) and predict lunar and solar eclipses.  The historical significance of the Mechanism for technology and science can be compared to that of the Acropolis for architecture and arts.

The “3DEXPERIENCE platform” now accessible on the campus via Department of Mechanical Engineering on cloud, will be the platform to further the develop of the Antikythera Mechanism  www.meng.auth.gr

Using the 3DEXPERIENCE platform on the cloud, these virtual product development learning environments will nurture the digital skills that companies seek in order to better support their customers. Students can experience and master digital product design, digital manufacturing, realistic simulation and collaborative innovation applications that help them to design and further develop high-performance mechanism.

In the framework of the collaboration of the Department of Mechanical Engineering with DASSAULT SYSTEMES, the AUTH Research Team for the Antikythera Mechanism  intends to: redesign the Antikythera Mechanism using the capabilities of the 3DEXPIRIENCE software, integrate into this the additional gear system with motion, the pointers of the 5 planets and create the necessary data for the manufacturing of the mechanism parts and create simulations, videos etc. regarding the functions and the operation of the Mechanism.

ΩVISION 2000 SA is value-added reseller of Dassualt Systemes since 2007 dedicated to the markets of Greece and Cyprus and working closely with the academic communities.

Dassault Systèmes partners with institutions worldwide to develop enhanced teaching methods that help transform science, technology, engineering and mathematics education and contribute to the well-being of future generations.  Over six million engineering students use the company’s technology in an educational context at 40,000 academic institutions.

For more information on Dassault Systèmes in academia: https://academy.3ds.com/en