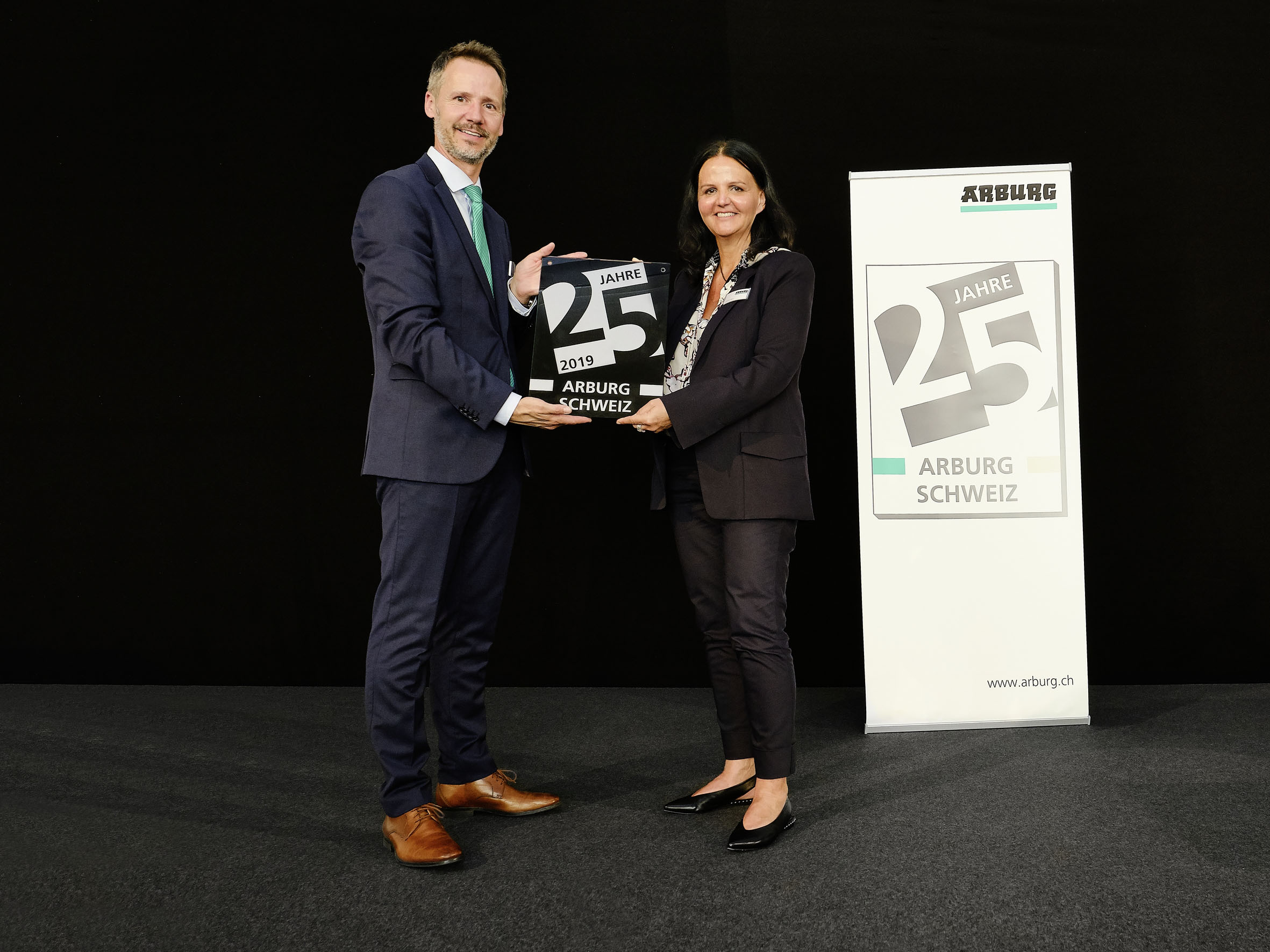 25 years of Arburg in Switzerland

In her speech, Juliane Hehl emphasised the outstanding achievements of the Swiss Arburg team over the past 25 years: “Important factors in Arburg’s success story are its high level of expertise and its continuity, both of which are highly prized by its customers.” She pointed out that many employees had been working for Arburg AG for many years, and two had even been involved since the beginning.

Thanks to the Arburg team and customers

Speaking on behalf of the entrepreneurial families and the entire Arburg parent company, Juliane Hehl also thanked the Swiss Arburg team for many years of successful work and presented Marcel Spadini with the anniversary sculpture.

This expression of gratitude was also echoed by Gerhard Böhm, Managing Director Sales, who described the establishment of the subsidiary as an important milestone in the successful development of Arburg in Switzerland. “We have been the market leader in Switzerland for many years, which is why Arburg AG is considered a jewel in the crown of our international subsidiary network.” Gerhard Böhm thanked the customers for their trust in Arburg technology and the many instances of successful cooperation over the past decades.

Looking back over decades of success

The Managing Director Sales also presented the highlights of Arburg’s activities in Switzerland, which began 50 years ago with the delivery of the first Allrounders to Swiss customers. These machines were supported for many years by trading partner Hatag before the subsidiary was eventually founded. This began in 1994 with a twelve-member team, which has now grown to 20 employees. Other milestones included Arburg’s move to its own building in Münsingen in 2001 and the change of management in 2009. Since Peter Moser retired ten years ago, Marcel Spadini has continued the success story of Arburg AG. As guest of honour, Peter Moser reviewed his time at Arburg period, which began in 1971 when he joined Hatag, on the basis of various anecdotes. In the nearly four decades he not only pressed forward with the successful development of Arburg, but the entire plastics industry in Switzerland.

Over the past 25 years, Arburg AG has developed extremely successfully. “Our customers in Switzerland now rely more than ever on innovative strength and production efficiency in order to stay ahead of the competition,” said Gerhard Böhm. Accordingly, highly complex, fully automated and specifically configured machines and turnkey solutions are in much demand. The Allrounders were mainly used in medical technology and the watch-making industry, as well as in the electrical and construction industry. Arburg Plastic Freeforming with the Freeformer is gaining in importance in Switzerland as a supplementary manufacturing process.

“In addition to the performance of our high-tech machines and systems, customers also appreciate the excellent and competent support of our team on site,” emphasised the Managing Director Sales.

Experts look to the future

However, the focus of the anniversary event was not on the past, but rather on the future. The potential of injection moulding, additive manufacturing and digitalisation was demonstrated in various exhibits and applications. The expert presentations, which shed light on the future of the plastics industry in five and 25 years, took things one step further. These visions were presented by Prof. Frank Ehrig from the Rapperswil College of engineering, Prof. Jürg De Pietro from the Plastics Training and Technology Centre (Katz), Silvio Ponti, President of Swiss Plastics, René Ziswiler from Swiss Plastics Expo Lucerne, Dr Christian Rytka from the Technical University of North-West Switzerland, Christophe Jacot, President of Swiss Plastics Cluster, Bruno Bürgisser from the University of Technology and Architecture in Fribourg and Prof. Wolfgang Kaiser from ETH Zurich.

Congratulations from all sides

All speakers congratulated the company on its the silver jubilee and emphasised the excellent level of cooperation between Arburg and the respective companies, universities and institutes. These congratulations were also echoed by Beat Moser, president of the Münsingen commune, in his greeting. He underlined the importance of “Arburg as home of injection moulding” and praised the values of the family business: “Arburg demonstrates its brand promise ‘Wir sind da.’ This benefits not only customers and employees, but also the community of Münsingen.”

“We intended our anniversary open event to express our thanks to our customers for their long-term cooperation, but above all to show them how we can continue our successful path together,” said Marcel Spadini. He said that the consistently positive feedback from the guests was proof that this had been achieved all around. “The atmosphere was excellent and also showed that we plastics experts here in Switzerland are a real family and are well prepared for the future.”