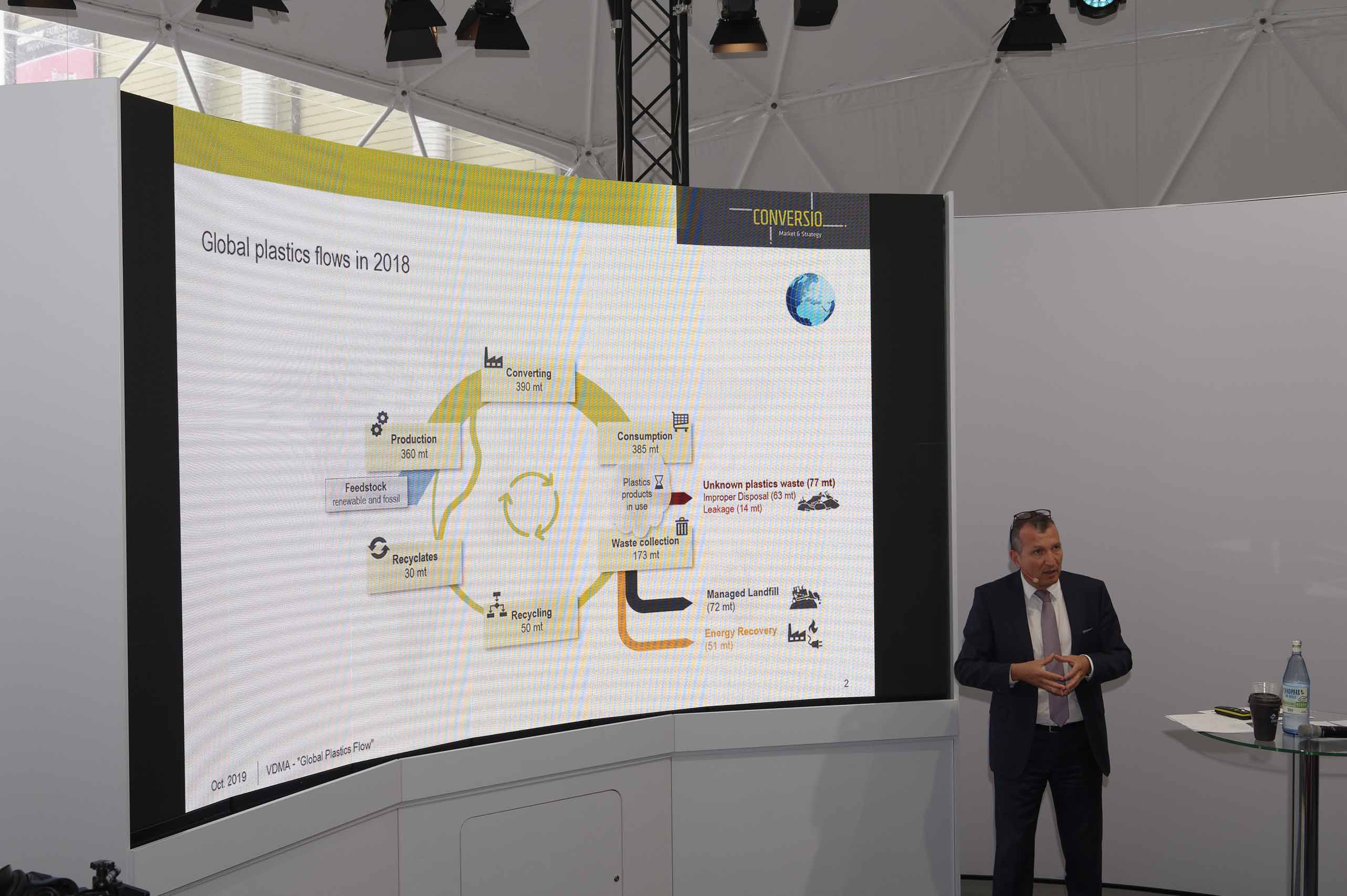 Addressing the problem where it arises

• Waste systems must be financially viable for emerging markets.

Düsseldorf, 18 October 2019 – Most of the huge plastic carpets on the oceans come from countries that have no or poorly functioning waste systems. Many of these countries are located in Asia. If you want to prevent garbage from getting into the sea, you have to do something there. The Austrian plastics materials producer Borealis, together with its partner SYSTEMIQ 2017, has therefore launched the STOP initiative, which aims to establish a circular economy in order to avoid waste. “Most of the waste comes from countries that are less prosperous than we are. We must therefore help them to develop systems that can also be financed”, said Borealis CEO Alfred Stern on Friday in the VDMA pavilion at K, explaining his company’s commitment. On the third day of the fair, the VDMA focused on the topic of the worldwide circular economy.

In Indonesia, STOP supports the 30,000-inhabitant city of Muncar in East Java in solving its waste problem. “We have developed a collection system together with the municipality. It was even more important to us to prevent plastic waste from entering the environment at all”, said Stern. Initial experience has been so good that the initiative is being expanded. Two more municipalities should be supported by 2020. Stern can imagine becoming active in other countries as well in the longer term. Other companies have joined the initiative in the meantime, including the food company Nestlé. According to Stern, a functioning collection system, entry into a circular economy that also generates financial returns, and advantages for the respective municipality, are the three goals that at the forefront of each new project. 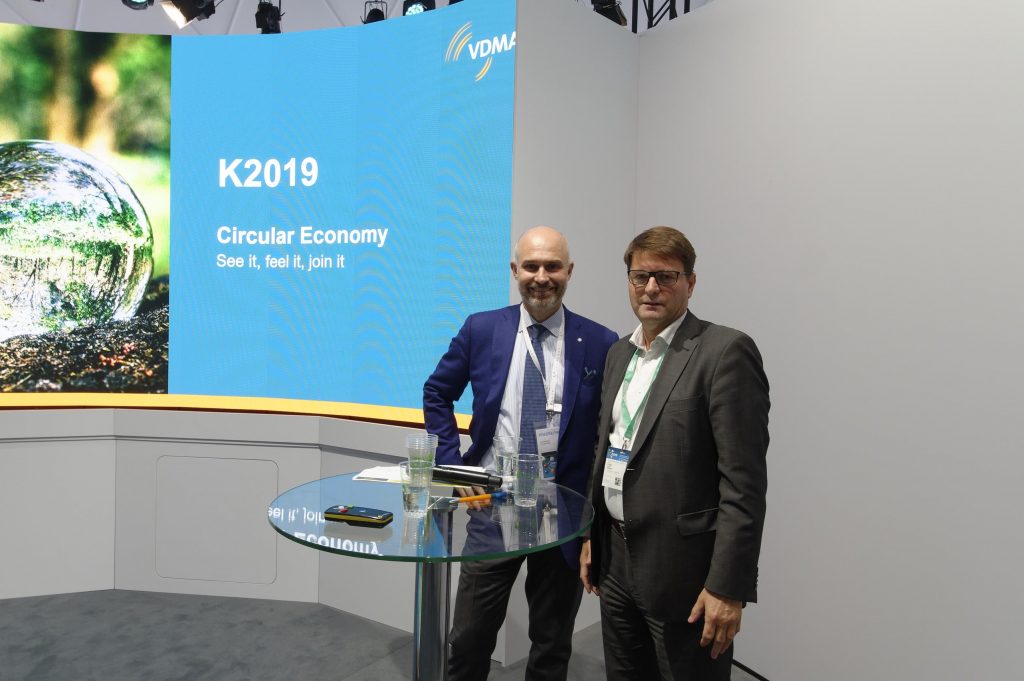 Current figures from Conversio, a consulting firm specializing in technical industries illustrate just how urgent the waste problem is. According to these figures, a total of 250 million tonnes of post-consumer waste was generated in 2018, of which 173 million tonnes was collected and either incinerated, landfilled or recycled. The remainder, 77 million tons, were disposed of inappropriately, i.e. mostly thrown away. “In view of these quantities, a functioning waste management on a global level is absolutely necessary”, said Conversio managing director Christoph Lindner in the VDMA pavilion. All the more so when one considers that many experts believe that the amount of plastic produced will continue to increase. “The world population is growing, as is prosperity, people want a better life, and plastic plays a key role in this”, said Stern of Borealis.

Awareness of the waste problem grows

The problem is now recognized everywhere in the plastics industry. The number of corresponding initiatives and projects is increasing. Most recently, the PREVENT Waste Alliance was founded in May. “We are committed to reducing waste and increasing the use of recycled materials in new products”, said Nicole Bendsen of the German Society for International Cooperation (GIZ). Of which GIZ is a founding member and also heads the initiative’s secretariat. The interest from industry, science, private and state institutions, is so great that the number of member organisations has meanwhile grown from 30 to more than 70. Starting next year, PREVENT wants to implement its goals in specific projects in emerging and developing countries.

No country in the world produces more plastic and more plastic waste than China does. The central government has recognised the waste problem and is countering it with numerous programmes. One is the 11+5 program. Different waste management methods are being tested for two years in eleven cities and five regions, with different development stages and industrial structures. The results should be available by the end of March 2021. “In this way, we want to find out which is the best model. This will then be transferred to the whole country,” said Ben Ho of the China Thermoforming Association. The project is managed and monitored by a dedicated department of the Ministry of the Environment. “The Chinese plastics machinery producers welcomed the approach, which gives us many opportunities”, Ho said.

How is plastic made? What raw materials are needed for it? Should plastic be abolished? Why send plastic waste to other countries? What is bad about plastic? Can you die of plastic? On Friday afternoon, the VDMA also hosted 13 children from the fourth grade of a primary school in Dauchingen, Baden-Württemberg, who had prepared well with their teacher for the encounter with experts from the world of plastics. But also Gerhard Böhm, Managing Director of the injection moulding machine producer Arburg, and Thorsten Kühmann, Managing Director of the VDMA Plastics and Rubber Machinery Association, had also prepared well and were able to talk and answer the children’s questions competently.

In our world, plastics are indispensable. The downside is the littering. Carelessly discarded plastics products condense to form thick carpets, not just on rivers and seas, but also on land. A complete circular economy could prevent this evil and put the focus back on the benefits of plastics. In order for this to be a success, we all need to work together: processors, raw material manufacturers, mechanical engineers and recyclers, but also brand owners, end consumers and politicians.
VDMA will shine the spotlight on circular economy at the leading K 2019 trade fair in Düsseldorf in October and show how closed loops can work effectively. Throughout the process, stakeholders will be having their say in the association’s daily programme during this international industry event.

More than 230 companies are members of the association, covering more than 90 percent of the industry’s production activities in Germany. Ten percent of our member companies come from Austria, Switzerland and France. The German member companies represent sales of EUR 7 billion in core machinery and EUR 10 billion including peripheral technology. Every fourth plastics machine produced in the world comes from Germany; the export rate is 70 percent. Ulrich Reifenhäuser, Member of the Management Board of the Reifenhäuser Group, is the chairman of the association.