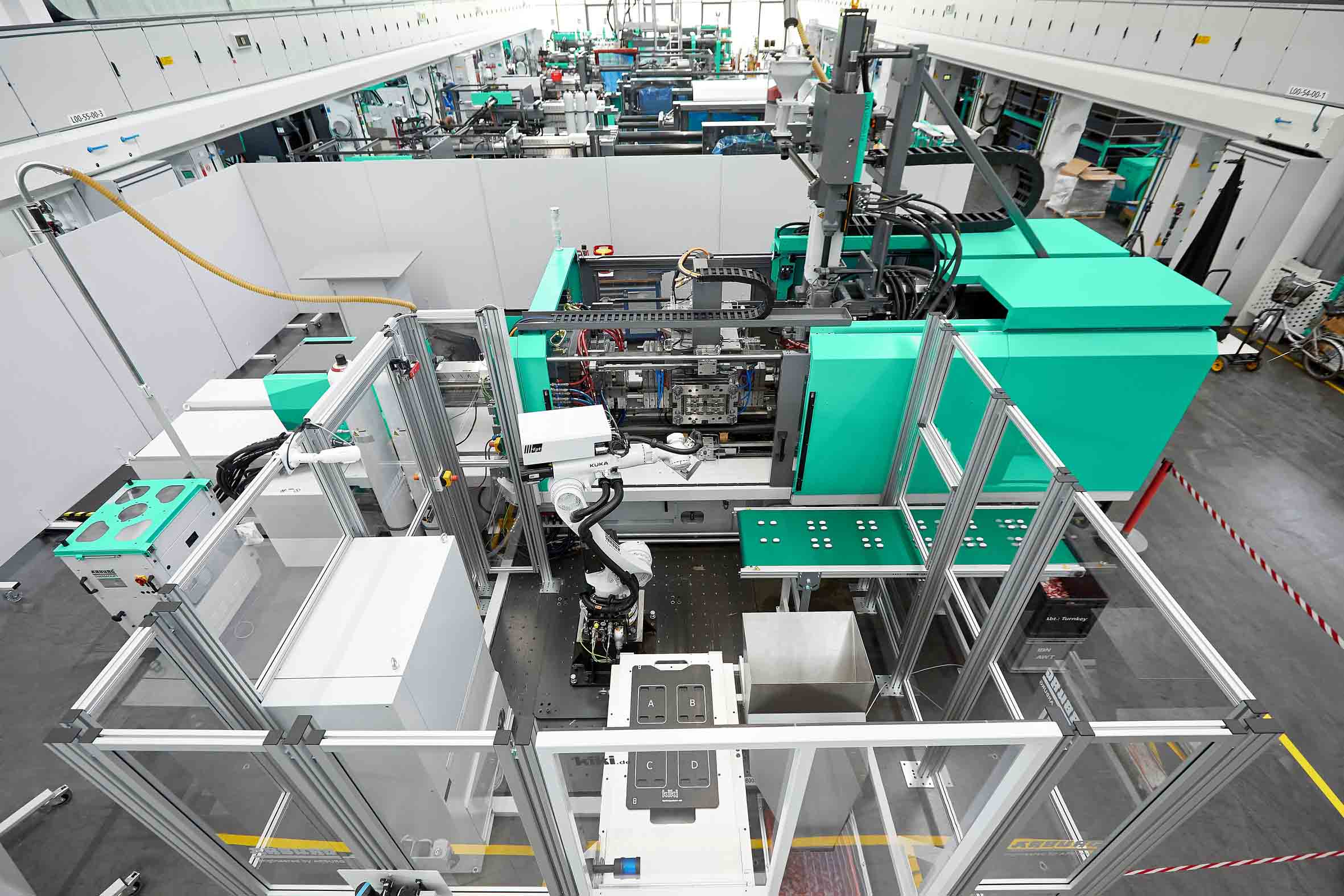 Innovative cube technology is significantly reducing cycle time. Previously, Arburg’s hybrid cube series had been primarily intended for efficient high-volume production in the packaging industry. The area of application of cube moulds has since expanded to take in the production of technical parts. The new Allrounder Cube 1800 with a clamping force of 1800 kN is providing the ideal response to this trend. With its compact cube, this machine completes the portfolio of products at the lower end of the range. It is able to significantly reduce unit costs even when producing parts in low volumes. Its potential can be illustrated using the example of a two-component product from the field of personal care.

Despite high mould investment costs, the innovative cube technology quickly pays for itself. This is because it can significantly improve productivity – and it can do this in many different industries. The compact Allrounder Cube 1800 is particularly suitable for the cost-effective production of technical and medical products, for example, as well as for personal care products.

The hybrid Allrounder Cube 1800 has a clamping force of 1800 kN and a distance between tie-bars of 570 x 570 mm. It can be equipped with horizontal injection units in sizes from 400 to 1300 and moving injection units in sizes from 70 to 800. At its heart is a compact cube from partner company Foboha, which is easily accessible from above. The rotation of the cube is powered servo-electrically and the horizontal movement relies on rack and pinion mechanisms.

Fitted with an 8+8-cavity mould, for example, the Allrounder Cube 1800 is capable of more than double the output quantity of a conventional size 570 Allrounder with a 4+4-cavity rotary mould working with the same mould mounting surface. Or the same output as at least two Allrounders with comparable tie-bar spacing or one injection moulding machine three numbers larger – which drastically reduces the installation area.

An Allrounder Cube 1800 with two injection units in sizes 400 and 170 demonstrates an example of application for the personal care area of application involving a 4-cavity pilot mould from Foboha: each injection unit can produce four bichrome sealing caps made from chemically recycled PP from Borealis in a cycle time of 8.7 seconds. Four frames each weighing 0.85 g are injected at station one. Having been rotated 90 degrees onto the passive side of the cube, the pre-moulded parts are cooled at station two. Following a second rotation, the second component (2.10 g) is injected at station three. Finally, the finished parts are removed automatically at station four, also without influencing the cycle time.

The example application involves the use of a six-axis robot which is fully integrated in the machine controller. The robot system sets the finished parts down on a conveyor belt. The controller runs a check for defective injection moulded parts and any that are identified as not OK are removed by the robot system. Furthermore, test samples can be removed at the touch of a button and set down in QA trays sorted by cube side for subsequent visual inspection of the injection moulded parts. 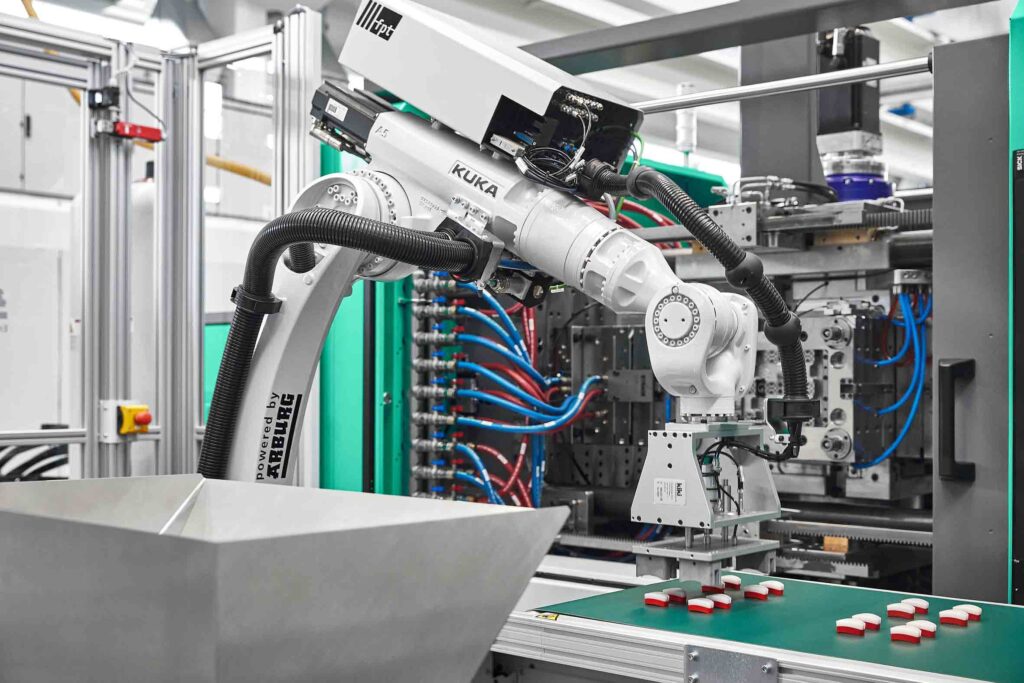 In this innovative cube-mould technology, the injection moulding of the pre-moulded part and the finished part, as well as cooling and removal, take place simultaneously. Just using the passive sides of the cube as a cooling station can reduce cooling time by 30 percent.

The Allrounder Cube hybrid series combines speed and precision with reliability and energy efficiency. The machines are available with clamping forces of 1800, 2900 and 4600 kN. Injection moulding in two sequential mould parting lines takes place at the same time as cooling and removal. Just using the passive sides of the cube as a cooling station can reduce cooling time by 30 percent.

Other processes that do not influence cycle time (including loading inserts, unscrewing, the assembly of individual components, integrated checks and automated parts removal, for example) enable cost-effectiveness to be increased further beyond that of conventional free-fall packaging applications. In some circumstances, one Allrounder Cube can replace several conventional injection moulding machines and reduce footprints by up to 75 percent. Its energy requirement is up to 45 percent lower compared with that of conventional Cube machines. 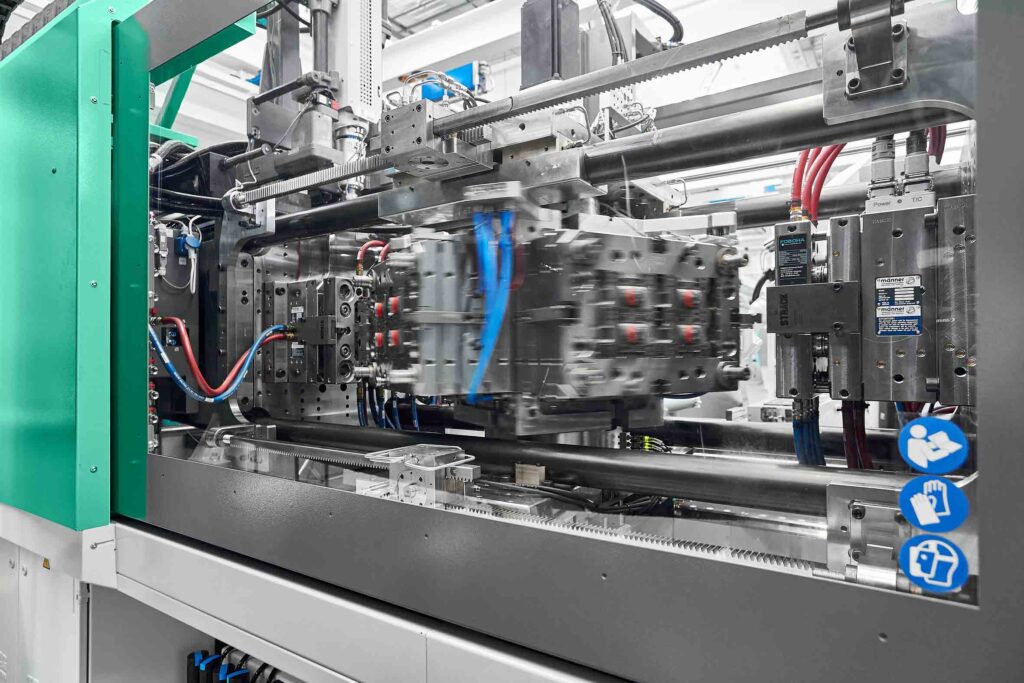 At the heart of the cube machine is a compact cube designed by our partner Foboha which can be easily accessed from above. The rotation of the cube is powered servo-electrically and the horizontal movement relies on rack and pinion mechanisms.

Close cooperation between Arburg and Foboha

In matters of cube technology, Arburg works in close collaboration with Foboha, a mould specialist based in Haslach, Germany and an established expert in its field. Combined with a “smart” machine controller, the modularity of the Allrounder Cube series delivers high levels of flexibility and can be perfectly matched to the mould technology. The robotic systems that are increasingly being used can also be integrated into the controller. At Arburg, an interdisciplinary cube team consisting of colleagues from application technology, sales and automation to achieve very specific targets in the delivery of all aspects of “the cube”. This means that customers who are interested in cube-mould technology can get custom-made complete solutions from a single source. They include special designs like reverse cube technology with counter-rotating cube halves and cube machines for three-component injection moulded parts.