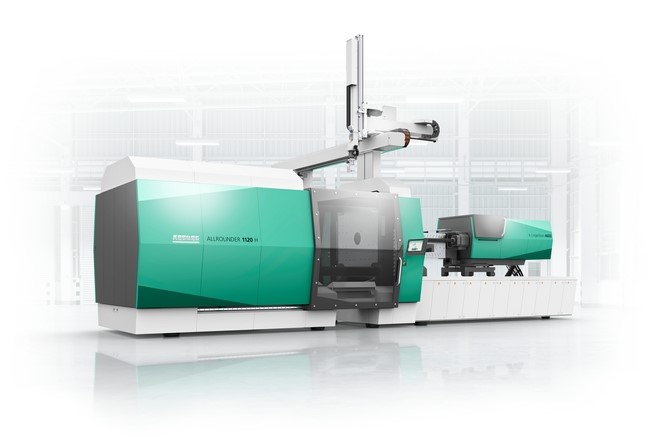 The literally “biggest” application highlight from Arburg at the K 2022 is the production of an interesting premium toolbox in Arburg design. At trade fair stand “13A13”, an efficient turnkey system centred on a hybrid Allrounder 1120 H with 6,500 kN clamping force and size 7000 injection unit will produce and refine the main components live.

Over-moulded 3D design films on the corners of the toolbox, for example, provide the necessary styling and high-grade aesthetics. A Scara robot processes the film inserts from project partner, Leonhard Kurz, while further handling is taken on by a linear robotic system, the Multilift V 40. The films undergo in-mould lamination in the injection mould and are refined afterwards with embossed Arburg lettering in a hot stamping station. The lid and lower tray are discharged via a conveyor system. The toolboxes are completed manually outside the turnkey system using pre-manufactured components like centre section, handle, closing clips and feet, and then given to the trade fair visitors.

The exhibit with Gestica control system has lots of smart functions, such as the new Varimos plug-in from Simcon for AI-supported variant analysis. Through the cross-linking of the software with the Gestica control system, even more precise machine parameters can be generated during the filling simulation with the “aXw Control FillAssist,” and the configuration of moulded part and injection mould shortened from several weeks to a few days.