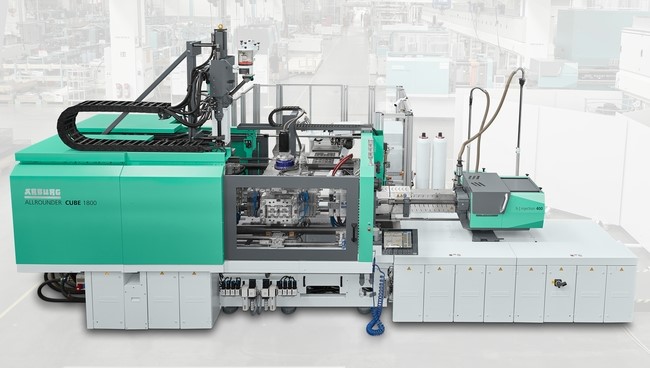 At the K 2022 trade fair, a particularly innovative application in terms of cube-mould technology can be seen at Arburg stand 13A13, where an automated three-component Allrounder Cube 1800 will be producing a functional component from PP, TPE and POM using an 8+8+8-cavity cube mould from partner Foboha. The finished moulded part is produced directly in the mould thanks to assembly injection moulding. Mould filling, cooling, part removal by a six-axis robot and other assembly steps including capping in the gripper take place synchronously.

The K exhibit is a current customer project and a successful example of how maximum output can be achieved in a minimal footprint.

The compact Allrounder Cube 1800 three-component cube machine with a clamping force of 1,800 kN is particularly well suited to smaller cavity numbers. The exhibit works with three injection units in sizes 70, 170 and 70. At its heart is a compact cube from partner company Foboha, which is easily accessible from above. The 8+8+8-cavity tool with two index platens on each side of the cube features the new CITI technology. CITI stands for „Cube with Integrated Turning Inserts“, an index technology patented by Foboha.

Eight functional components can each be produced with the 8+8+8 cavity cube mould in a cycle time of around 9.5 seconds. First, a frame made of PP is injected on the moving nozzle side. The cube rotates 90 degrees, then the pre-moulded parts are turned 180 degrees by the CITI technology and, after another 90-degree cube rotation, a TPE seal is applied on both sides and a functional element made of POM is moulded on.

Final assembly directly in the gripper

A six-axis robot integrated in the control system removes all eight parts from the mould at the same time. Final assembly takes place directly in a gripper from Arburg’s partner Kiki in a five-step process that takes just four seconds, with no effect on the cycle time. The ready-to-use products are finally deposited on a conveyor belt.

Depending on the circumstances, one Allrounder Cube can replace several conventional injection moulding machines and reduce the overall footprint by up to 75%. Innovative cube-mould technology significantly reduces cycle time. In addition to efficient high-volume production in the packaging and medical technology industries, compact cube machines such as the Allrounder Cube 1800 are also increasingly being used for the production of technical parts and smaller quantities.