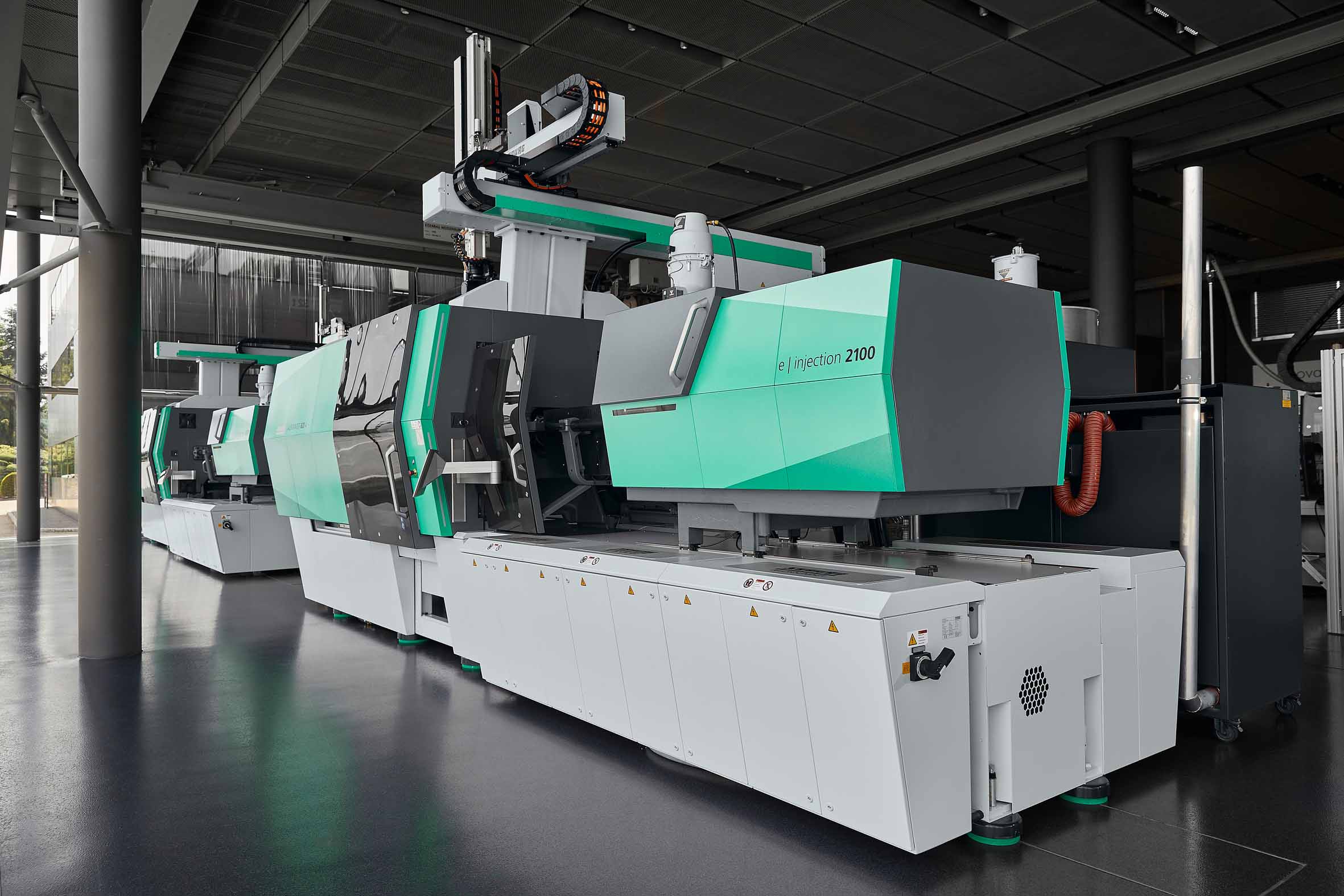 The in-mould lamination of decorative films with plastic creates high-quality surfaces like those that are increasingly in demand for control panels in the automotive industry and in the field of home appliances, for example. For their first joint demonstration of In-Mould Decoration (IMD), Arburg and Leonhard Kurz showcased the in-mould lamination of a control panel for a washing machine. The process was made possible by combining an Arburg Allrounder 820 A and a film feed unit with control cabinet from Leonhard Kurz.

IMD technology offers great potential for the visual enhancement and functionalisation of plastic surfaces. It is not only about transferring endless designs and colour motifs to injection moulded parts. In-mould film lamination also means not having to spend time and money re-working injection moulded parts. Designs can be varied and even changed completely in next to no time. 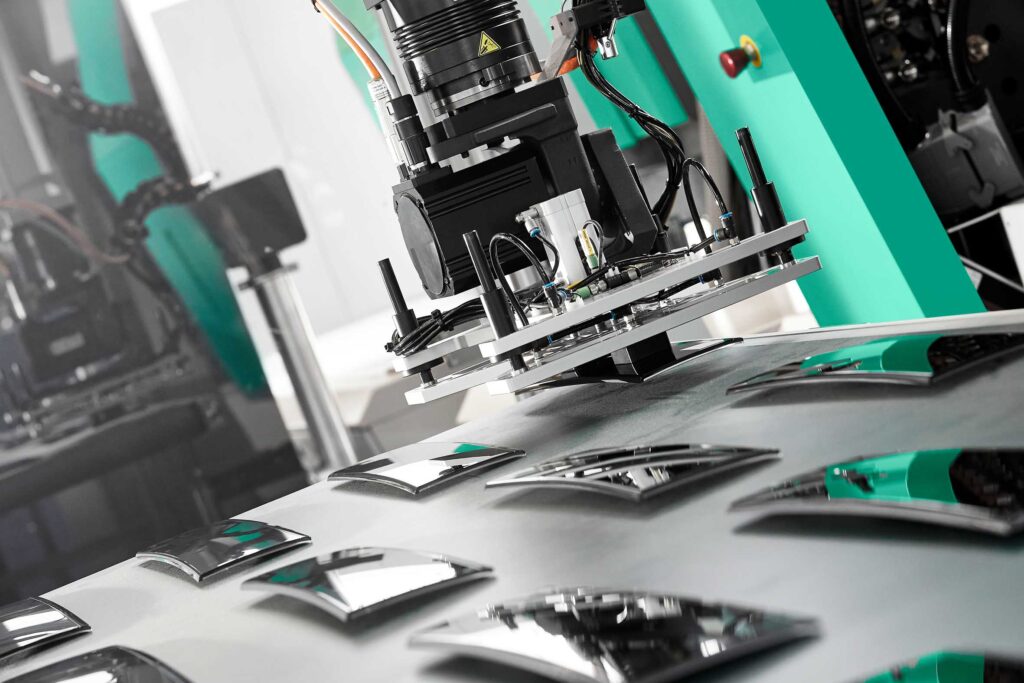 Joint project between Arburg and Leonhard Kurz: a MULTILIFT V 40 Cartesian robot carefully picks up and sets down the washing machine panels once the process to decorate their surfaces is complete.

An electric Allrounder 820 A with a clamping force of 4000 kN produces control panels for washing machines from transparent MABS in a cycle time of around 60 seconds. The 1-cavity injection mould and the foil feed unit, which consists of an unwinder, rewinder and control cabinet, are by Leonhard Kurz. IMD is a continuous roll-to-roll transfer process: the carrier film featuring the decorative motif is unwound above the clamping unit via a film feed, in the above example wiped free of dust with a oilcloth and then pulled through the injection mould, which is fitted with a clamping frame. During in-mould lamination with plastic, only the wafer-thin paint layers are transferred. This means that the component can be recycled easily at the end of its service life. Following unwinding, the carrier material can also be recycled into PET granules. 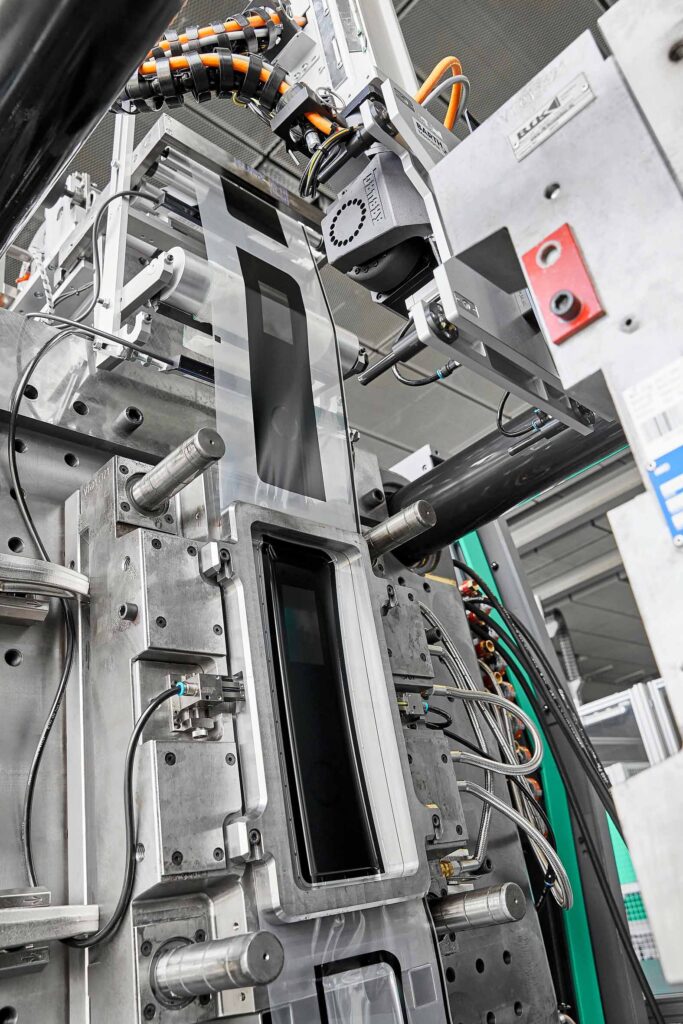 Precise timing: the in-mould lamination of the panel involves an endless film being pulled out of a Leonhard Kurz film feed unit through the injection mould and secured by a clamping frame.

A simple exchange of signals between the injection moulding machine and the film feed unit ensures precise timing. Before a new cycle can commence, the clamping frame is lifted up on the moving ejector side. Optical sensors position the carrier film, which features fiducial marks around its edges, precisely inside the mould. Next, the clamping frame, which has a sealing lip, moves back to the initial position whilst the film is secured inside the cavity via a vacuum and in-mould-laminated with MABS. During the injection process, a combination of pressure and temperature is used to release the decorative element – in this case a high-gloss black paint – from the carrier roll and stick it firmly to the plastic surface of the panel. The finished part, which weighs 145 g, is ejected on the nozzle side via a hydraulic core pull. A MULTILIFT V 40 fitted with vacuum suction cups carefully picks up the finished part and sets it down on a conveyor belt. If required, the coating layer of the finished part can be fed through a UV curing unit and then ejected directly onto the conveyor belt ready for assembly, for example. No downstream process steps are necessary.

Products whose looks match their high-quality functions are increasingly in demand. The range extends from trims, panels and centre consoles inside cars to operating panels for home appliances and even laptop lids, mobile phone cases and closures for cosmetic products. Beyond simply decorating the surface of products as demonstrated by the example of the opaque design front of the washing machine control panel, “intelligent” surfaces integrating touch and function are also possible. Interactive displays and touch control panels, for example, can be created by integrating touch sensors in addition to design features.