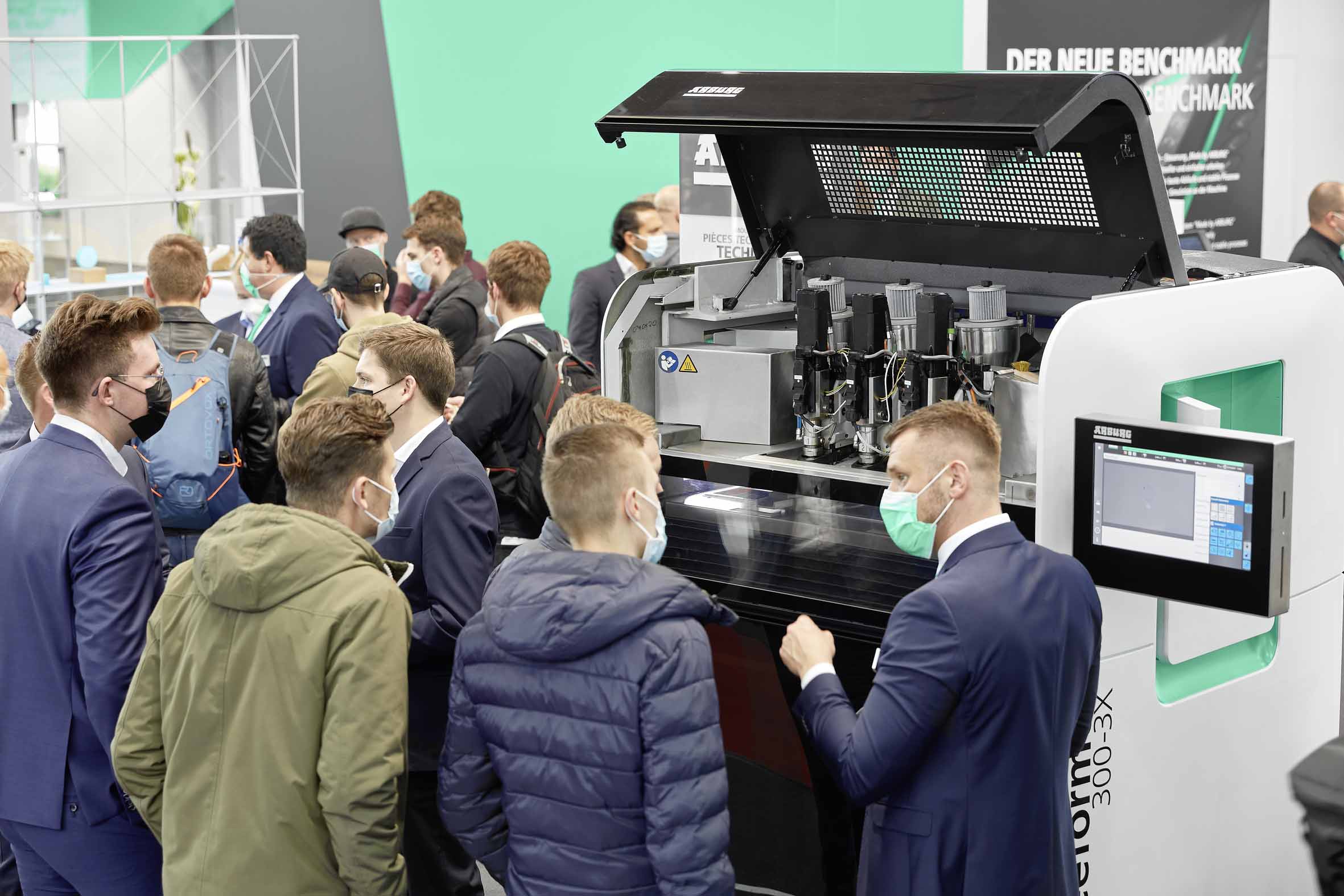 Arburg at Chinaplas 2022: High-end wherever you look

A high-tech-friendly country like China hosting one of the largest international plastics trade fairs: Chinaplas 2022 in Shanghai is set to be particularly interesting. Naturally, Arburg’s appearance there has been planned accordingly. Particularly interesting target groups will be attending from the automotive industry, the highly dynamic medical technology sector, and the electronics industry. Machine technology and processes will match these, with LSR processing, high-speed medical applications, and lightweight construction with fibre direct compounding (FDC).

A total of four Allrounder exhibits – from the electric Allrounder 470 A to the large Allrounder 820 S – and two freeformers – a freeformer 200-3X and a freeformer 300-3X – will be on show. All machines will be connected ‘live’ to the Arburg host computer system ALS for demonstration purposes and to the arburgXworld customer portal, another focus of the trade fair display. Detailed information on the arburgGREENworld environmental and recycling program will round off Arburg’s involvement in Chinaplas.

Zhao Tong, Director of Arburg’s organisations in China, notes the importance of the event: “Chinaplas is the most important trade fair for us in the entire region. It is important that we showcase cutting-edge technology here, because the high-end market in China is also constantly growing and gaining in importance. Arburg has chosen the focal points of its trade fair activities accordingly. With our injection moulding machines and automation systems, we offer optimal solutions for individual series production, and with the freeformers, further solutions for the production of prototypes and small series. Then there are tools like arburgXworld and the ALS host computer system for supporting service and production management, and the arburgGREENworld environmental and recycling program for greater resource conservation and production efficiency.” 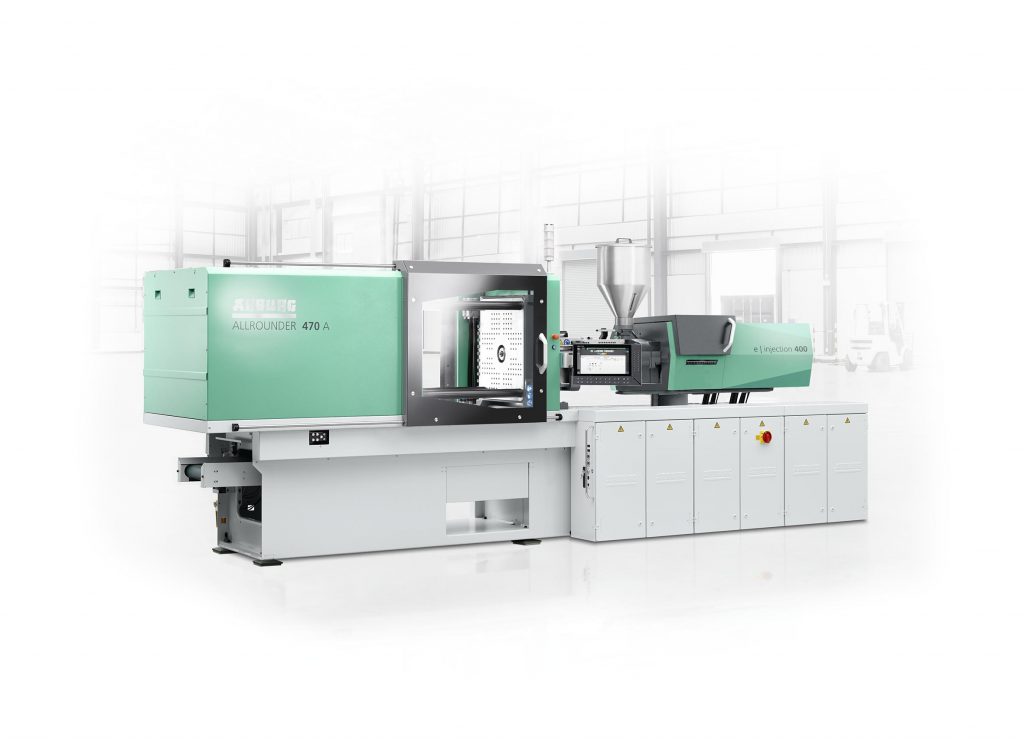 Zhao Tong sees the electric Allrounder 470 A with 1,000 kN clamping force, size 290 injection unit and Gestica control system as an important highlight. A Multilift Select with a load capacity of six kilograms completes the configuration. The powerful injection unit with 35 millimetre three-zone screw can produce even complex parts in multiple moulds quickly and to a high standard without any problems. As a sample for the trade fair, the electronic ‘connector’ part will be produced on this machine in a 16-cavity mould. Each part weighs 0.59 grams, and the 16 connectors will be produced in a cycle time of around six seconds. The machine’s energy requirement is very low, which increases economy and efficiency. This means that the Allrounder also fits in very well with the company’s efforts as part of the arburgGREENworld program.

On a hybrid Allrounder 470 H with a clamping force of 1,000 kN, size 400 injection unit with 35 millimetre standard screw and Gestica control system, pipette tips will be produced from PP in a 64-cavity mould. The cycle time for this high-speed product is only seven seconds, which is partly due to the machine being equipped with powerful memory technology and the aXw Control ScrewPilot for reproducible injection and high moulded part quality. The shot weight is 64 grams. The complex automation comes from regional Chinese manufacturer Ningbo Welllih Robot Technology Co, LTD. In addition to a Luxor80 granule feed from Motan, a hot runner system from Husky and two HB-Therm temperature control devices are also used.

A face mask will be injection moulded in a 4-cavity mould from Polarform Werkzeugbau GmbH. The sample part will run on a 570 E Golden Electric Allrounder during Chinaplas. The high-end system with this machine for LSR processing is a novelty in Asia. The Allrounder 570 E Golden Electric is defined here as an entry-level machine with maximum precision for the special application of LSR injection moulding. It has a clamping force of 2,000 kN and a size 800 injection unit with a 45-millimetre LSR screw and no mixing or compression zone. A special non-return valve is also used for low-viscosity material. A Wacker Chemie AG LSR optimised for medical technology is processed. The moulded part weight is around 42 grams and the cycle time some 60 seconds. The extreme undercut of the mask and different wall thicknesses with the very thin lip make the injection moulding of these parts highly complex. The gripper on the Multilift Select robotic system with a 15-kilogram load capacity in transverse design ensures precise, smooth removal. It comes from Barth Mechanik GmbH, and the dosing system from Chinese manufacturer Mucomac in Shenzhen. The system is completed by a CoolShot cold runner system from Ewikon with electrically needle-type shut-off system and a cooling unit from Shini in Taipei. For medical technology, which is also one of the most important industries in this region, clean production with maximum process control is indispensable. Arburg can fully guarantee this with this configuration.

The largest Arburg machine at Chinaplas will be a hydraulic Allrounder 820 S optimised for fibre direct compounding (FDC). The machine has a clamping force of 4,000 kN and a size 3200 injection unit equipped with a 70-millimetre special screw for long glass fibre processing. The aXw Control ScrewPilot, which allows reproducible mould filling via the control of injection pressure and speed is also included as necessary basic equipment. A platform will produced with a PP as base material. The single-cavity mould has a hot runner with needle-type shut-off nozzles. The moulded part weight is 700 grams and the cycle time some 80 seconds.

The FDC lightweight construction process is characterised by high material availability and up to 40 per cent lower costs compared to special long-fibre granules. FDC moulded parts are used in all innovative sectors of plastics processing, such as automotive construction or the aerospace industry. The physical properties that can be achieved are due to the individually adaptable long fibres. The FDC unit directly on the injection unit is integrated into the Selogica control system, as is the entire process, and includes a servo-electric lateral feeder with built-in cutting device, an adapted cylinder, and special screw geometry.

The moulded parts are removed from the single mould via a Multilift Select robotic system with a load capacity of 15 kilograms. Downstream, the items are weighed inline via a scale automation system for quality assurance, entered into the process documentation, and then deposited on a conveyor belt.

According to Zhao Tong, the exhibits at Chinaplas 2022 are a perfect match for the current market requirements in China: “The automotive industry is becoming increasingly energised by developments and applications in the field of e-mobility. In medical technology, Arburg can make an important contribution to more stable supply chains thanks to its central production, its on-time delivery, and the high reliability of its Allrounders. More and more companies are also looking to IT solutions such as the arburgXworld customer portal and the ALS host computer system to increase their production efficiency. With our products and technologies that are ‘Made in Germany’, we are in the right place at the right time. Because – and this is also demonstrated by our involvement in Chinaplas – we can offer our customers regionalised services to fully support them in increasing quality, efficiency and resource conservation in their companies.”