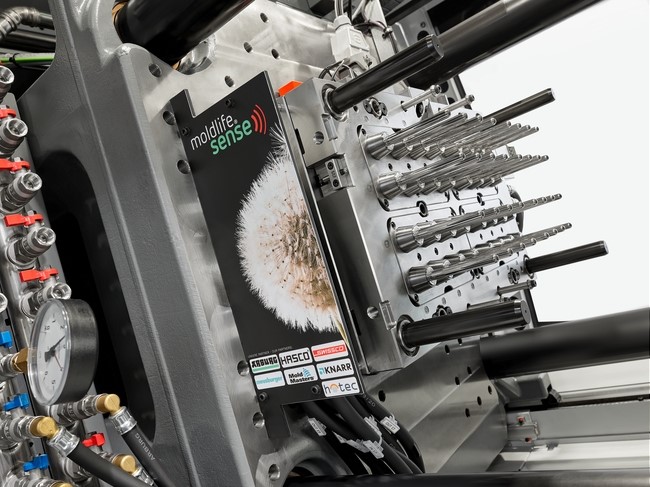 An especially “smart” exhibit at the Arburg trade fair stand “13A13” and an example for the future of digital production cells is the turnkey system based on a hybrid Allrounder 630 H: the injection moulding machine communicates via the Gestica control system and OPC UA with mould, hot runner controller, material dryer and automation. The “Moldlife Sense” computer system is integrated into the 32-cavity mould provided by Arburg’s partner Hack, and enables monitoring across the complete life cycle.

In this example, the practical advantages of digitalisation and automation in plastic processing are especially evident in the production of blood vials for medical technology.

The “Moldlife Sense” computer system enables the complete life cycle to be monitored. Arburg has implemented the new solution for communication between mould and machine together with the cooperation and development partner Hack. A hybrid “Packaging” Allrounder 630 H in clean-room design produces, with the 32-cavity mould of Hack, transparent blood vials made of shatterproof PET. The location of changes occurring at the mould can be precisely assigned with the help of a sensor system. Two cameras take images or videos, e.g. of mould separation and parts ejection. There are also four displacement as well as four knock sensors for the tie-bar guidance. In this way, process changes can be detected at an early stage and damage to the mould reliably avoided. The data is passed directly to the machine control system via an OPC UA interface.

In addition to the mould, the central Gestica control system, hot runner controller (Mold Masters), a special PET material dryer (Eisbär) and the automation (Waldorf) are connected to the central Gestica control system via OPC-UA. In this way, the temperatures of hot runner and dryer can be monitored, and the automation started and stopped directly via the Gestica. The hot runner controllers also communicate via the Euromap (EM) 82.2, and the automation via the new interface EM 79. Further features such as the “aXw Control PressurePilot” controller function and the “aXw Control MeltAssist” provide additional process reliability and enable comfortable and quick working.

32 blood vials are produced in a cycle time of around 7.5 seconds, and removed via a side-entry robot made by Waldorf. The encapsulated automation is equipped with four cameras, which check that the components are straight. A QA request can also be called up at the push of a button.