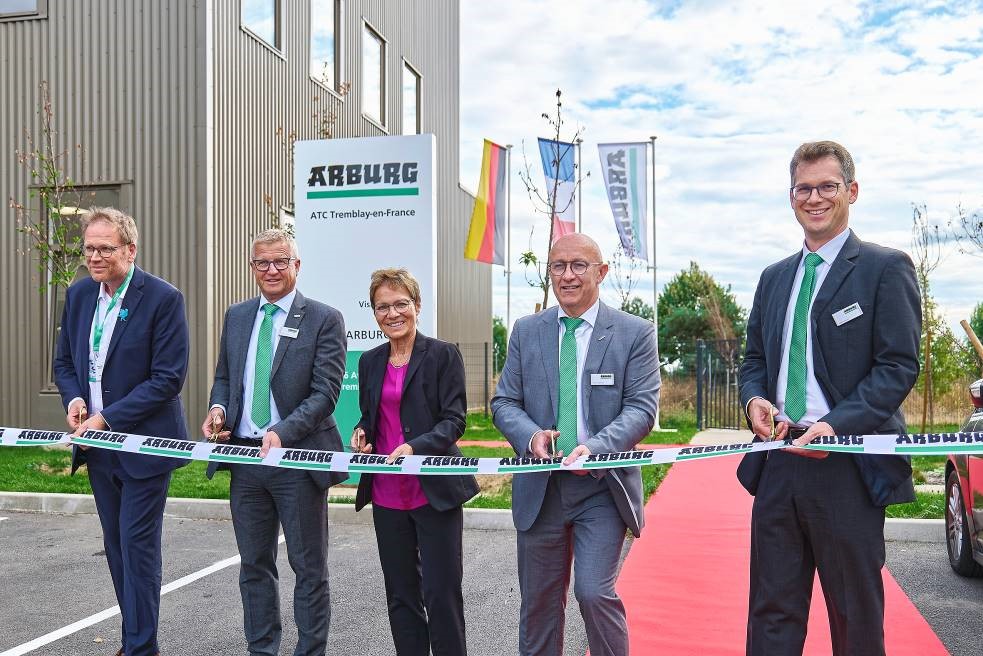 The Arburg subsidiary in France officially opened its new building on 14 September 2002 in Tremblay-en-France. High-profile representatives from Arburg headquarters, Renate Keinath, Managing Partner, and Gerhard Böhm, Managing Director Sales and Service, were present to celebrate the opening of the Arburg Technology Center (ATC) alongside the guests. During an Open House event held the next day, the visitors were able to see for themselves the many possibilities of the ATC. The programme included live demonstrations in the new showroom and expert presentations. In total, over 80 guests attended the two-day event.

On behalf of the entire organisation, Renate Keinath thanked the customers for their trust in Arburg: “Our successful cooperation over the past decades confirms to us that by opening a subsidiary in France in 1985, we took the right path.” The subsidiary in France is our oldest foreign location and is very important to Arburg. The concept of supporting customers on location has worked magnificently, and in the years that followed, we gradually rolled it out all over the world. “The great importance of the French market for Arburg is also reflected in the current investment in the new Arburg Technology Center,” said Renate Keinath. “This is a significant milestone for us and for our presence in France.”

The new Arburg Technology Center in the industrial park in Tremblay-en-France in the Paris area has a floor space of over 1,500 square metres, and is thus around 40 percent larger than the previous location in Aulnay-sous-Bois. With an area of over 400 square metres, the showroom has space – depending on machine size – for up to four Allrounder injection moulding machines and for Freeformers. “We can show a representative cross-section of the Arburg portfolio here,” explained Renate Keinath. The machines are available for tests with customer moulds, as well as for training purposes. There are two training rooms, measuring over 100 square metres, for the theory part of the courses. “The entire infrastructure of the ATC is state of the art and ensures that customers and employees alike will feel completely at ease in the new premises,” said the Managing Partner.

In his speech, Gerhard Böhm reviewed the history of the subsidiary. The foundation stone for Arburg’s international sales and service network was laid in 1985 with the foundation of the subsidiary in France. Today, the team in France comprises 26 employees, 15 of whom work in the Service division alone. As well as on-site service technician deployments, their tasks also include hotline support, the provision of spare parts, application technology advice and customer training. In addition, the subsidiary also supports customers in Morocco and Tunisia. “The Arburg France team handles these mammoth tasks with flying colours,” said Gerhard Böhm. The successful German-French partnership is also demonstrated at the Technology Days, where up to 200 visitors traditionally travel from France, making it one of the largest groups from abroad. In France itself, around 20 years ago, an Allrounder went on tour with the information and training truck, “Destination Plasturgie”, with the aim of introducing young people to the world of plastics, first in France, and later across Europe. A further example is the current cooperation with the plastics association Polyvia, and its Polyvia formation section, which will use the ATC’s excellent training possibilities for its courses in future.

“With the new ATC, we have created excellent conditions for continuing to foster outstanding cooperation with customers and partners in the future,” concluded Gerhard Böhm.

The programme of the Open House included a guided tour for visitors, and live demonstrations of the machines. Afterwards, experts gave presentations on topics such as digitalisation, arburgGREENworld, strategies on resource efficiency, and the circular economy. “The guests are impressed by the new building and the entire event,” Pascal Laborde was happy to report. “The building represents our desire to develop further, to modernise our injection moulds, our processes and our actions, in order to react even better to the needs of our customers.”