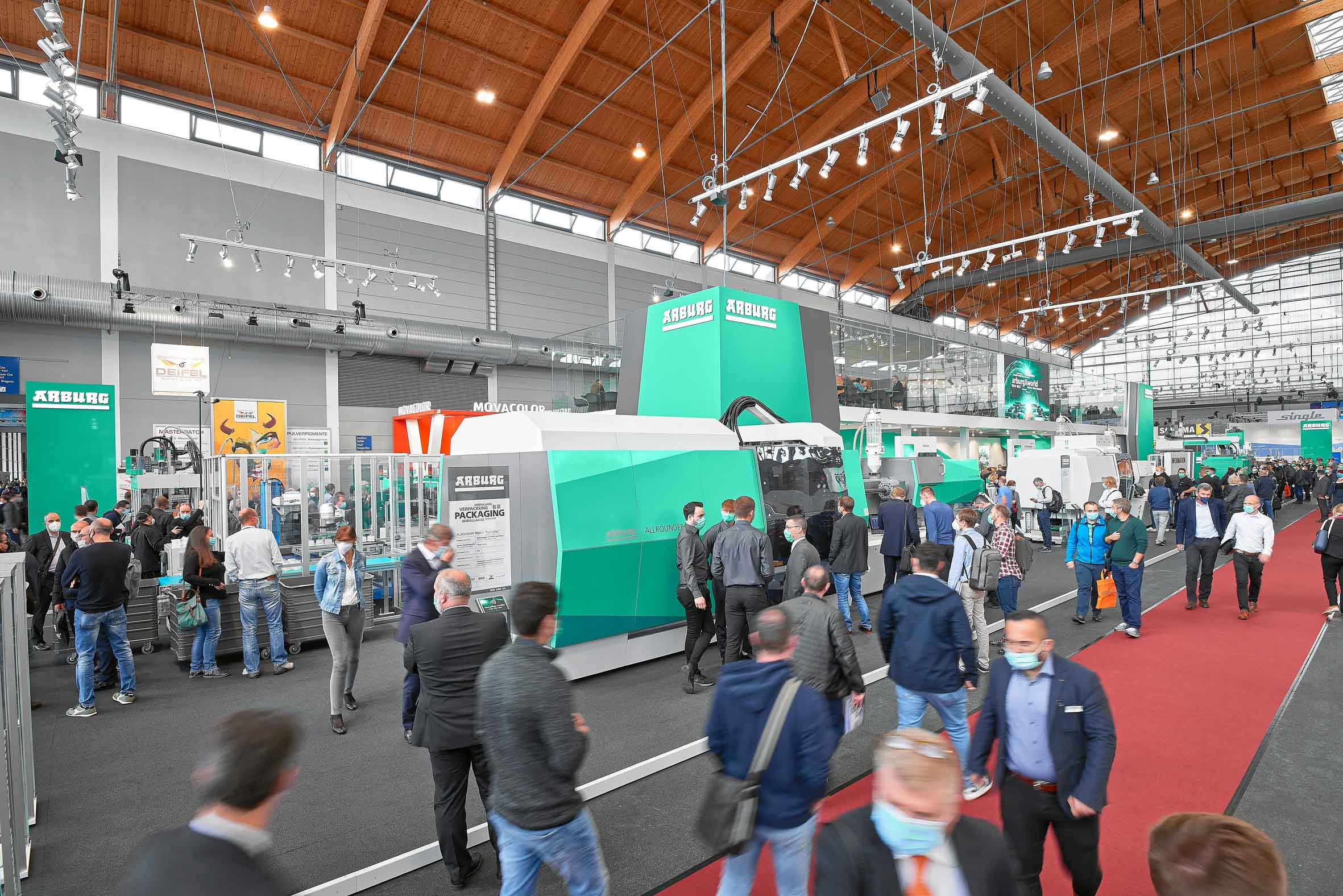 “We are delighted finally to be back here at Fakuma in Friedrichshafen and to meet our customers and partners face to face.” This was the unanimous sentiment of Arburg partners and managing directors at the Fakuma press conference on 12 October, the first day of the trade fair. With the largest trade fair stand and many new products on display, including some from the Arburg family, the company made a clear statement in favour of Fakuma and the Friedrichshafen location. Under the motto “The best of both worlds“, Arburg combined major topics of the future – digitalisation as well as sustainability and resource conservation in 2021 – with its declared aim of increasing customers’ production efficiency and making them future-proof in the long term.

“After a long time with no major international in-person trade fair in Europe, we travelled to Friedrichshafen with a great deal of joy and excitement, and were hoping for a Fakuma that was as ‘normal’ as possible,” commented Dr Christoph Schumacher, Director Marketing at Arburg. “Our expectations were more than met: the quality of the trade visitors and their interest in our exhibits and innovations was very high. Many decision-makers came to our stand to discuss specific projects.”

Referencing Arburg’s expanded stand, future-oriented topics such as digitalisation, sustainability, and resource conservation, exciting live exhibits including a world premiere, and its large team offering intensive support and advice to visitors, Dr Schumacher added that the very positive feedback from all visitors confirmed that the company’s strategy of showcasing itself to the full and making a statement had been a success. 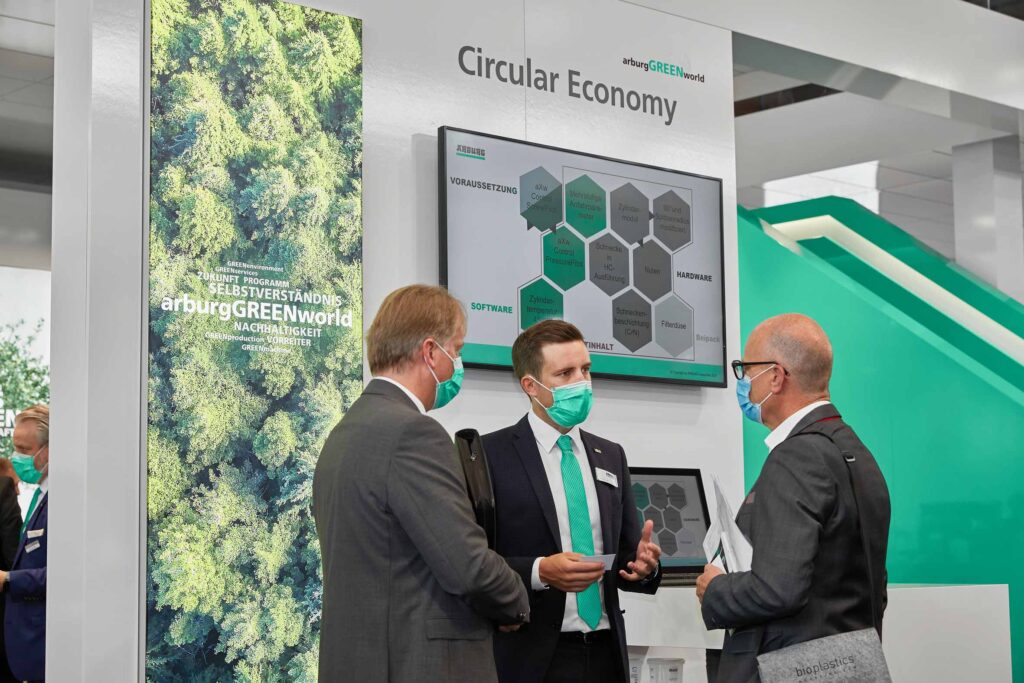 As is well known, the “arburgGREENworld” programme brings together all aspects of resource conservation and the circular economy. At its stand, Arburg used several applications to demonstrate how resources can be conserved and materials recycled in a sensible way. Examples included the processing of transparent, bio-based PA 12, a bio-plastic consisting of 39 per cent renewable raw materials based on castor oil. This material was used to create the well-known Uvex sunglasses on a turnkey system based on an Allrounder 520 A.

Post consumer recyclate (PCR) was used on an Allrounder 1300 T rotary table machine at the stand of Arburg’s partner, Lauffer.

In the case of recyclates, the sharply fluctuating quality of the material places high demands on injection moulding machines and injection moulding processes. To address this, Arburg has put together a new “recyclate package”, which celebrated its premiere at Fakuma. The package includes various control functions and special plasticising features to enable recyclates to be processed reliably. The recyclate package is available for all Allrounders and can also be retrofitted to older models.

Just how sustainability and digitalisation interact was demonstrated by the “CurveCode” and “HolyGrail” marking technologies as innovative solutions for separating plastics by type and returning them to the materials cycle. 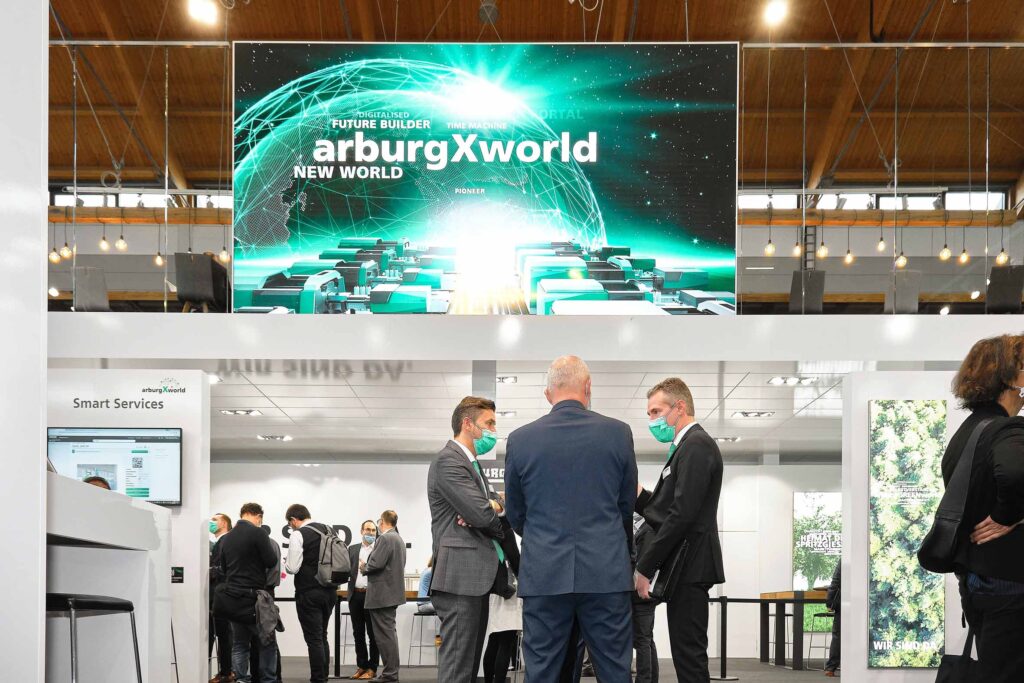 Arburg’s programme at Fakuma also reflected the rapid growth of “arburgXworld”. The company’s entire range of assistants was on show, including “aXw Control FillAssist” for 3D filling simulation and “aXw Control MeltAssist” for process evaluation. Both of the new assistants were making their debut at the show

There were also new features for the customer portal. The new “AnalyticsCenter” app enables mould sampling, trials and injection moulding processes to be documented and analysed. And a “Customer Upload” feature, allowing customers to add their own equipment, has been incorporated into the “MachineCenter” app. 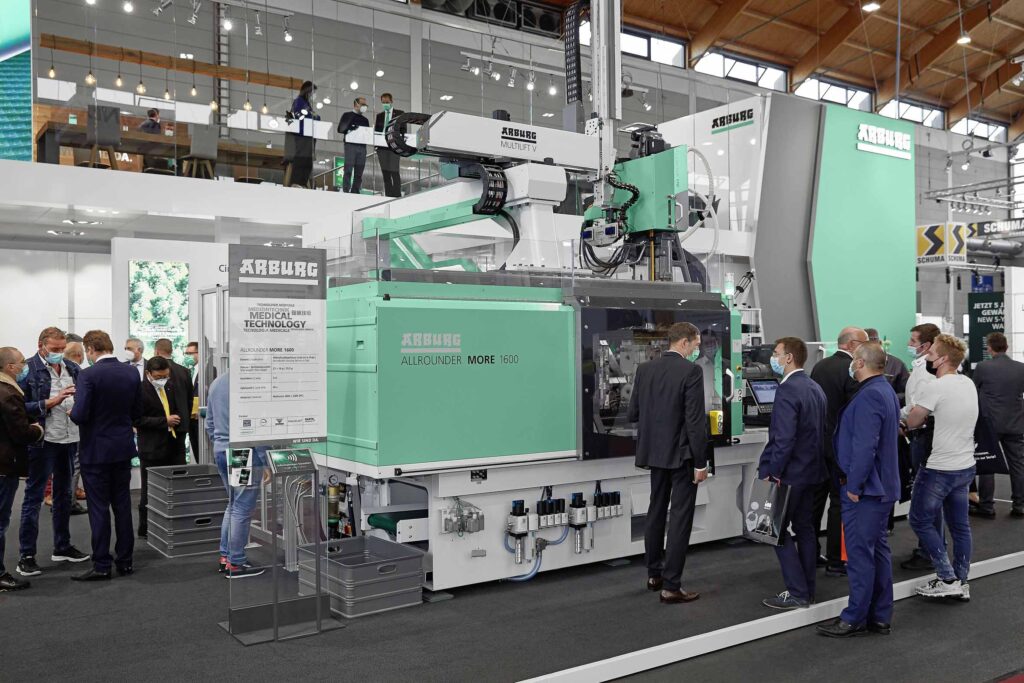 Arburg’s new Allrounder More machine series was also unveiled to the world. The series covers the two sizes 1600 and 2000 and satisfies the most stringent requirements for production-efficient multi-component injection moulding. Its flexible design offers significantly more space for larger moulds and ejectors, more modularity in its assembly, and impressive ease of use via the Gestica control system. An Allrounder More 1600 produced a complex lab-on-a-chip for medical technology at the trade fair.

Made by Arburg: Gestica and planetary roller screw drive

Other focal points were the Gestica control system and the planetary roller screw drive – both “made by Arburg” and benchmarks in the plastics industry. The Gestica not only saves

time in day-to-day work, it also offers a high degree of IT security and allows data to be analysed directly on the machine. Process simulation by “aXw Control FillAssist” is unique.

Arburg also highlighted its drive element, the planetary roller screw drive as an important part of the drive train, which is a central feature for the performance and durability of an injection moulding machine and accordingly a “seal of quality”.

Additive manufacturing also played an important role at Fakuma. A live presentation was given of the processing of high-temperature material Ultem on a freeformer 300-3X. In addition, a large number of components demonstrated the potential offered by Arburg Plastic Freeforming for the medical technology and automotive sectors, where Arburg is working on exciting projects together with partners and customers. Also prominently represented on Arburg’s stand was sister company innovatiQ and its LiQ 320 printing system, which processes liquid silicone (LSR) using the exceptional LAM (liquid additive manufacturing) process.

An international sales and service network ensures first-class customer support at a local level: Arburg has its own organisations at 35 locations in 26 different countries and, together with its trading partners, is represented in more than 100 countries. The machines are produced exclusively at the parent factory in Lossburg, Germany. Of a total of over 3,300 employees, more than 2,750 are employed in Germany and a further 550 in Arburg’s organisations around the world. Arburg has triple certification, in accordance with ISO 9001 (quality), ISO 14001 (environment) and ISO 50001 (energy).