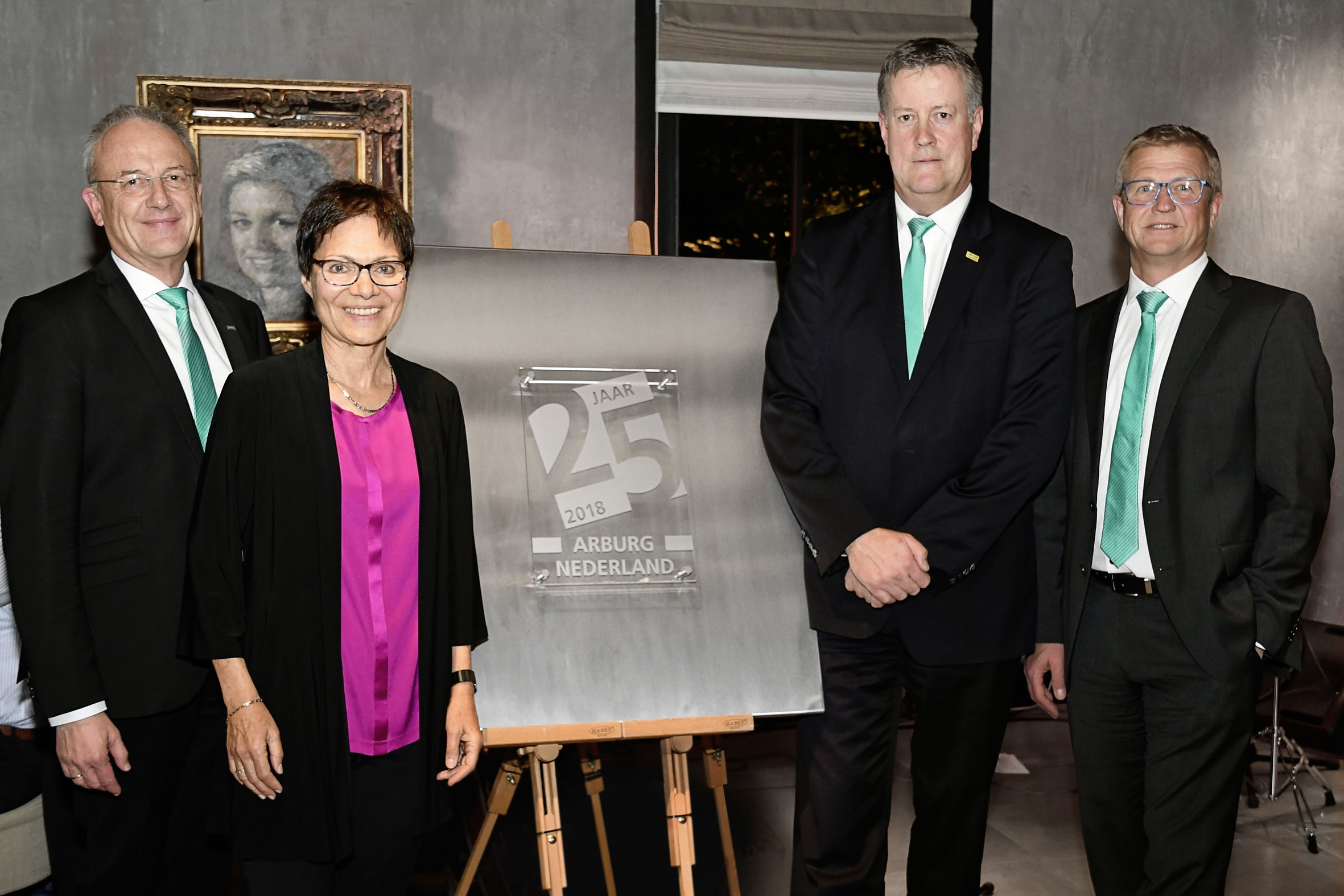 Arburg’s Dutch subsidiary celebrated its 25th anniversary over a period of three days. The highlight was the exclusive evening event on 1 November 2018 with 80 invited guests, including high-ranking representatives from the German parent company. In this festive setting, Managing Partner Renate Keinath presented the traditional Arburg anniversary sculpture to Gerrit Hazeleger, Managing Director of Arburg BV. This was preceded on 30 and 31 October 2018 by an open-house event with more than 240 visitors that focused on the key topics of packaging, Industry 4.0, additive manufacturing and bio-plastics.

In her speech during the anniversary event, Renate Keinath emphasised the achievements of the Dutch Arburg team: “Their outstanding commitment and high level of expertise are highly valued by customers and are an important factor in the success story of Arburg in the Netherlands.” She believed that this was evidence of the fact that the 14-strong team in the Netherlands offered living proof of the Arburg “Wir sind da.” brand promise every day. Together with Managing Director Sales Gerhard Böhm, she thanked customers and employees for the successful development of the subsidiary and presented Gerrit Hazeleger with the traditional anniversary sculpture in recognition of his team’s achievements.

Over six decades of presence in the Netherlands

Gerhard Böhm offered a review on the success story of Arburg in the Netherlands. This began with the sale of the first Arburg injection moulding machine to Dutch company Draka in 1957. More customers followed, supported by the company’s long-serving trading partner Kurval. In response to the successful way the market developed, Arburg then founded a subsidiary in Nieuw-Vennep in 1993 in a move designed to intensify local customer support. In the interests of a smooth transition, it was fortunate that it was possible to bring on board the employees of the trading partner responsible for Arburg technology. The next milestone followed in 2005 with the construction of a new building for the company in Utrecht. The subsidiary was able to expand its offering in terms of consulting, training and service.

“We have been experiencing strong growth in the Netherlands since 2016,” emphasised the Managing Director Sales. “As well as the very strong packaging sector, two-component injection moulding, elastomer processing and automation solutions have been much in demand. Companies have also been very active in additive manufacturing in the Netherlands.” He explained that Arburg was the ideal partner for all of these areas, making it the current market leader in injection moulding machines with clamping forces of up to 4,000 kN. The expansion of the Allrounder machine range up to 6,500 kN was also very well received by Dutch customers. As a further success factor, Gerhard Böhm mentioned not only the high-performance machines and systems, but also the excellent support provided by the local Arburg team. Their offering includes, for example, the hotline, competent service technicians, consulting and support in the areas of application technology, machine and robot system configuration, commissioning and process optimisation, the showroom for testing and training, as well as a wide range of courses and seminars.

Open-house events for customers and employees

In order to offer a “live” presentation of the company’s products and services on the occasion of the “25 years of Arburg Netherlands” anniversary, Arburg BV organised a two-day open-house event at the subsidiary’s building. With four exhibits and innovative applications, the topics of packaging, Industry 4.0, additive manufacturing and bio-plastics were intensively analysed. An Allrounder 570 H in the Packaging version with Brink automation produced four thin-walled IML tubs in a cycle time of 1.87 seconds. The practical example of Industry 4.0 from Arburg was also a highlight: this was a turnkey system for the varied injection moulding of individual elastic tension straps, customised to customer requirements. The processing of bio-plastics on an automated Allrounder injection moulding machine and additive manufacturing with the Freeformer rounded off the practical part. Together with the expert presentations, visitors received a comprehensive overview of the latest developments and trends in plastics processing.

Gerrit Hazeleger was particularly pleased with the consistently positive response to the anniversary events: “Our guests from industry and economy as well as from universities have praised the uniqueness of our event, which had provided them with an all-round successful mix of innovative technology, comprehensive knowledge transfer and intensive networking.”