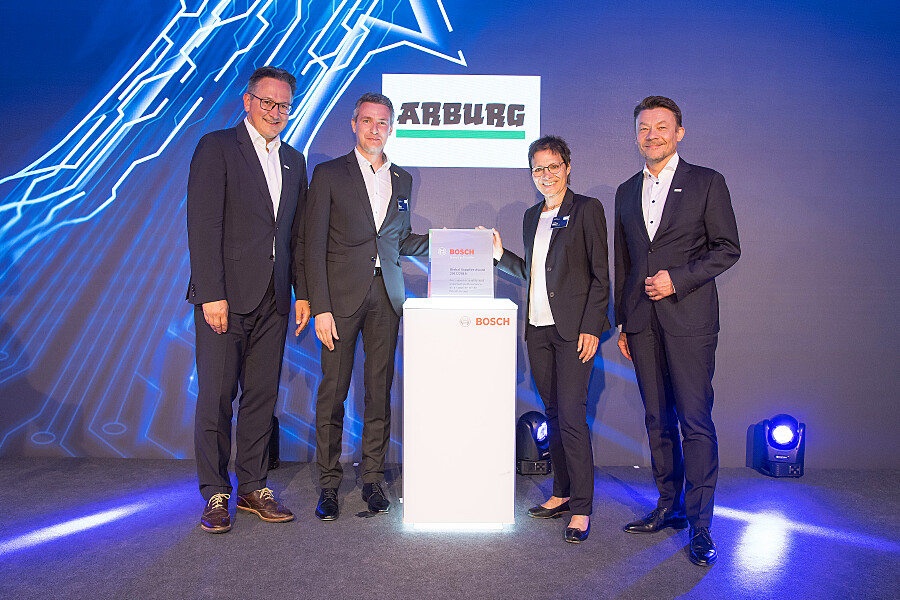 In his speech, Prof. Dr. Stefan Asenkerschbaumer, Deputy Chairman of the Board of Management of Robert Bosch GmbH, praised the exceptional performance of the award-winning companies: ”Our suppliers and service providers are important partners for Bosch’s competitiveness and transformation.” Not only does Bosch rely on its suppliers as partners for innovation in terms of competitive costs, but the company also cooperates with them to conserve natural resources.

Award for being a pioneer in digitalisation

On the one hand, Arburg received the “Bosch Global Supplier Award 2019” for the consistent standardisation of the electric Allrounder injection moulding machines used by Bosch, and the resulting faster delivery times. On the other hand, Bosch appreciated Arburg’s pioneering role in the field of Industry 4.0.

“We are very proud to have been awarded the Bosch Global Supplier Award 2019,” emphasized Renate Keinath, who attended the award ceremony together with Ralf Müller, Head of Technology and Key Account Management. “This special award does not only recognise the quality of our products and services, but above all our extensive range of products and our activities in the field of digitalisation in the plastics industry”. Furthermore, Bosch has found the right partner in Arburg when it comes to conserving resources, as this subject is firmly rooted in Arburg’s corporate philosophy.

“When it comes to new technologies, Bosch is always among the leading players,” said Ralf Müller, who is the global Key Account Manager for Bosch. The Arburg host computer system (ALS), for example, plays an important role in the in the realization of Industry 4.0 in injection moulding production and has been used successfully worldwide by Bosch since 2002.

The Bosch Group has been working with Arburg since 1958. Arburg received its first Bosch supplier award back in 1999. At the time, the exceptional achievements in terms of consistently high quality, flexibility and reliability of delivery in 1997/98 were commended. This year’s “Bosch Global Supplier Award 2019” for the exceptional performance as supplier proves that Bosch and Arburg are on the path to a successful future together.