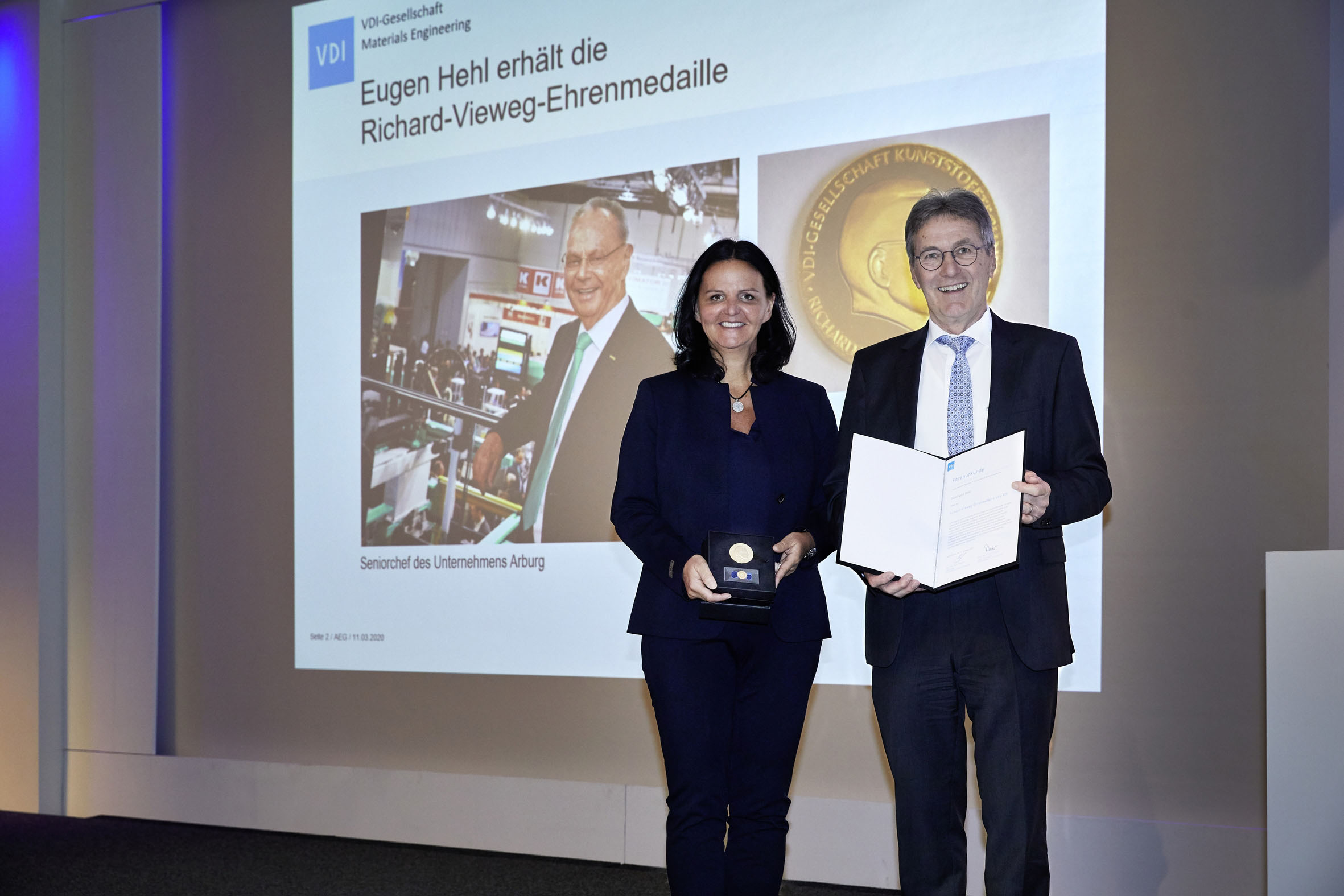 On 11 February 2020, Arburg Partner Eugen Hehl received the Richard Vieweg medal of honour for lifetime achievement from the Association of German Engineers (VDI). The honour was bestowed upon him at the annual VDI conference “Injection moulding 2020” in the German town of Baden-Baden. Arburg Managing Partner Juliane Hehl accepted the highest accolade conferred by the VDI’s plastics technology division from Chairman Dipl.-Ing. Kurt Gebert on her father’s behalf.

Alongside his brother Karl Hehl, who sadly died in 2010, 90-year-old Senior Partner Eugen Hehl has been responsible for transforming the company – now run by the third generation of the family – into one of the world’s leading manufacturers of plastics processing machinery.

He has now been awarded the Richard Vieweg medal of honour in recognition of his outstanding life’s work. Dipl.-Ing. Kurt Gebert, Chairman of the VDI’s plastics technology division, summed up why Eugen Hehl has been awarded the accolade: “He has dedicated his life to advancing the development of injection moulding technology, while also promoting new technologies outside his industry. In allowing many of his employees to sit on the committees of the VDI plastics technology division, he enabled their expert knowledge to be incorporated into the technical and scientific collaborative work carried out by the VDI.”

Dr.-Ing. E. h. Herbert Kraibühler, the former Managing Director Technology & Engineering of Arburg, gave the presentation speech at the award ceremony. Having worked very closely with Eugen Hehl over the course of his 50 years at Arburg, he was honoured to take on this task. “The recipient of the medal of honour, Eugen Hehl, is a passionate entrepreneur who has made an outstanding contribution to the global plastics industry over the past 60 or more years, from mechanical engineering and the use and application of plastics to training and environmental protection,” emphasised Kraibühler. “He has truly been a global ambassador for German mechanical engineering and has had a lasting impact on the industry. We all owe him a great debt of gratitude!”

Kurt Gebert presented the Richard Vieweg medal of honour to Juliane Hehl, who had travelled to Baden-Baden to accept the award on her father’s behalf. She sent his best wishes and gave thanks on his behalf for the honour and for the moving and kind words of the presentation speech. “My father has never gone in search of awards and prizes – for him, substance has always been more important than style,” said Juliane Hehl. However, the Richard Vieweg medal of honour is a truly special distinction which he is delighted to accept, she added, sharing with the audience his belief that the achievements it recognises have only been possible thanks to the support of all those who have accompanied him on this journey.

The Richard Vieweg medal of honour was first presented in 1978 by what is now known as the VDI Society Materials Engineering. Named in honour of the scientist for his outstanding and pioneering achievements, it is awarded to members and volunteers who merit particular commendation or to engineers who have made a special contribution to the fields of plastics technology.