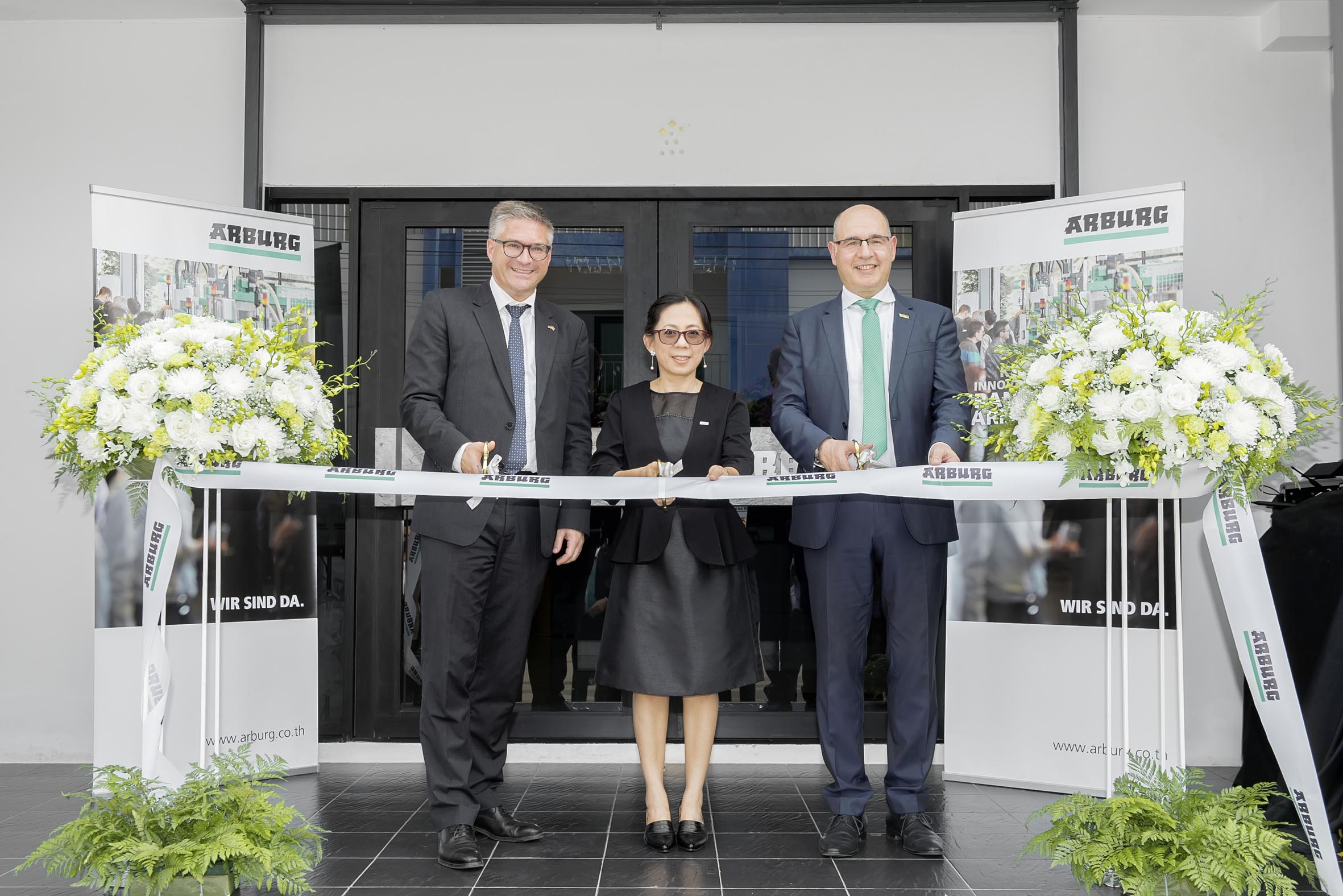 On 17 May 2019, Andrea Carta, Arburg Director of Overseas Sales, together with Ratree Boonsay, Managing Director Arburg Thailand and Dr. Alexander Raubold, Counsellor Economic and Commercial Affairs of the German embassy in Bangkok, officially opened the new premises in Samutprakarn, Thailand. To mark the occasion, the subsidiary led by Ratree Boonsay hosted an open house event. Around 60 customers attended the event. On 10 May 2019, a traditional blessing ceremony with nine Buddhist monks had already taken place, intended to bring luck to Arburg Thailand and its employees.

“We are very proud to have the largest Arburg showroom in Southeast Asia because of the new premises. This enables us to offer our customers in Thailand optimum support and even better service,” said Ratree Boonsay, who has successfully managed the subsidiary since its foundation in 2001.

“The positive development over the past decades confirms that we chose the right path and that our continuous investments in the important Asian market have paid off,” Andrea Carta commented on behalf of the entire parent company, thanking the customers and the Arburg team in Thailand.

Since late 1992, the Thai market had initially been managed by a representative office of Arburg Pte Ltd. Its first employee was Ratree Boonsay, who took over the management of the newly founded subsidiary in 2001 and successfully established and expanded it together with her team. The new premises are located in Samutprakarn, one of Thailand’s leading industrial regions.

Guests were able to experience the performance of the Allrounder injection moulding machines “live” with two packaging applications. A hybrid Allrounder 570 H with a clamping force of 2,000 KN produced two 500-millilitre containers in a cycle time of around six seconds. The second exhibit, an electric Allrounder 470 E Golden Electric with a clamping force of 1,000 kN produced two stacking boxes in a cycle time of around 18 seconds. A linear Multilift Select robotic system was used for handling of the moulded parts weighing 63.8 grams each. The customers were impressed by the applications and the possibilities offered by the new Arburg premises. With 705 square metres, it offers ample space for the presentation of machines, customer trials and training courses. The spare parts warehouse has grown as well, this allows even more spare parts to be delivered directly.

An international sales and service network guarantees first-class, local customer support. Arburg is represented by fully owned organisations at 33 locations in 25 countries and by trading partners in more than 50 countries. Its machines are produced exclusively at the parent company in Lossburg, Germany. Of a total of roughly 3,000 employees, around 2,500 work in Germany. About 500 further employees work in Arburg’s organisations around the world. In 2012, Arburg became one of the first companies to gain triple certification: ISO 9001 (quality), ISO 14001 (environment) and ISO 50001 (energy).