arburgXvision: “by professionals, for professionals – turnkey means: quality from a single source”
05/05/2021 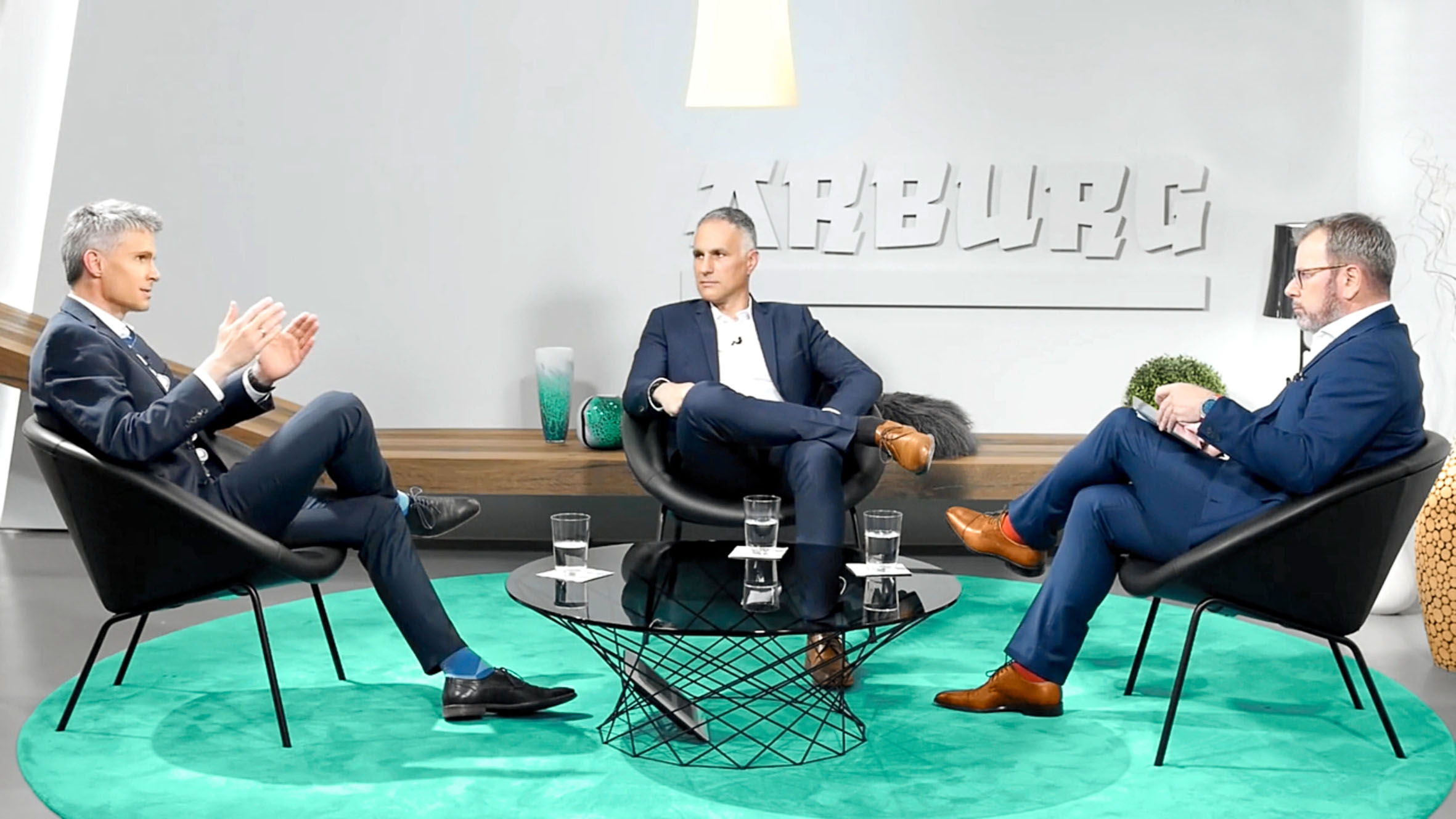 “By professionals, for professionals – turnkey means: quality from a single source.” That was the title of the fourth arburgXvision broadcast, which hit screens on 29 April 2021. Andreas Reich, a turnkey expert with responsibility for Business Development Sales, joined Bernd Eble, Senior Application Manager Cube Mould Technology, to provide fascinating insights into the world of automation, turnkey applications and cube-mould technology. More than 400 viewers tuned in live to the interactive Arburg TV broadcast online. Two links provided a direct, exclusive look at the assembly process in Lossburg and at the company Hermann Hauff, which has been using an Allrounder Cube to produce challenging two-component injection moulded parts.

Andreas Reich put forward his belief that “over the long term, every injection moulding project is set to become automated – no matter where in the world it is”. Among the reasons he listed for this were the high output quantities that are in demand and the increasing integration of production steps such as stamping inserts and assessing product quality. As a primary contractor, he said, Arburg offers custom-automated turnkey systems from a single source and draws on some 25 years of experience plus a whole host of expert partners. In Germany, every second machine that Arburg supplies already comes with an integrated robotic system.

“Machines that can be configured with modules and accompanying robotic systems with uniform operational systems are an essential part of developing alternative concepts for solutions”, stressed the turnkey expert, going on to state that the kind of system expertise Arburg delivers stands out because of its ability to examine the injection mould and the process in detail. The earlier Arburg is able to become involved in and provide input on the design of a product, he said, the more harmoniously the machine, mould and automation are able to work together. He used the example of a car body to highlight a range of manufacturing concepts and explained that, even though an investment involving full automation may cost three times as much, it will still pay for itself after just two years or so.

A live link with Lossburg provided an exclusive glimpse behind the scenes, with an assembly test bench being used to illustrate how Arburg brings this kind of turnkey system to life. Andreas Armbruster, head of the Automation & Turnkey Solutions department at Arburg, demonstrated the commissioning of a production cell for a PCB housing and the simple programming process involved in an integrated six-axis robot. He also showcased a networked smart turnkey system that produced drinking cups and performed inline finishing on them live. Thanks to two DM codes and the Arburg Turnkey Control Module (ATCM), each individual cup can be traced and linked to a digital product passport for recycling purposes. “We look forward to every new project that comes our way and are always delighted to help customers breathe life into them”, concluded Andreas Armbruster with a smile.

Allrounder Cube for even more productivity

In addition to the machine itself, the mould technology has a significant impact on the efficiency of a production cell and the unit costs. Bernd Eble expressed his firm belief that “cube technology is boosting productivity dramatically, in every industry”. As an example, he talked about the mass production of two-component snap closures for washing-up liquid bottles – items that are high-tech but need to cost next to nothing. “Our Cube series features outstanding productivity with a small footprint, making it suitable not only for packaging products, but also for the cycle time-neutral addition of inserts, assembly of single components and automated part removal.” Bernd Eble also provided an in-depth explanation of how cube technology works and the potential it holds, highlighting a three-component Allrounder 4600 Cube equipped with a Foboha 24-cavity cube mould and a six-axis robot. This production cell is able to replace four standard systems in a compact unit.

The second link of the broadcast focused on a unique reverse cube application in use at Hermann Hauff GmbH & Co. KG in Pforzheim, Germany. Jörg Vetter, the company’s Head of Technology, explained how Hermann Hauff is using this innovative cube technology in a in a cost-effective process that produces two-component rollers for the lower baskets found in dishwashers. In the future, the company plans to produce as many as 65 million of these each year. In this application, the Allrounder Cube is being used as a substitute for four standard injection moulding machines and three assembly systems.

Knowing what it takes

“Customer requirements are becoming increasingly complex and the demand for automation and digitalisation is rising all the time. Accommodating this means using customised, smart turnkey systems and a central control system that provides an easy, transparent way of operating everything. If cycle times can be cut down as a result of this, and the user experience and product quality can be made better, then the investment costs will pay for themselves in hardly any time at all”, said Andreas Reich in the final panel discussion with host Guido Marschall. Not only that, he said, but integrated robotic systems are enabling more synchronisation between machines, moulds and automation. Customers who already have experience of turnkey solutions and newcomers alike will both receive a warm welcome from Arburg, and can both benefit from improved cycle times and lower manufacturing costs. Bernd Eble expressed another important insight: “Our projects allows us to become involved in a lot of different areas, and since we’re consistently working with mould technology, that means we have developed an extensive stock of knowledge that we can transfer to all kinds of industries. Our automation solutions and new technologies keep our customers competitive and ensure they are fit for the future.”

Next arburgXvision broadcast on 27 May 2021

The next edition of arburgXvision will take place on Thursday, 27 May 2021. With “Savings through hidden benefits!” providing the title this time, the fifth broadcast will focus on production efficiency. Christoph Kiefer, Team Manager Technical & Commercial Sales Support, and Dr Thomas Walther, Head of Application & Process Development, will provide viewers with first-hand insights into the hidden benefits they can use to optimise their injection moulding production and lower costs as a result. There will also be two live links to the Arburg Customer Center to accompany the broadcast.

If you would like to attend and stay up to date with the series, visit our website www.arburgXvision.com and complete our quick and easy one-time registration process. Registration also includes access to all events and to the Media Center, where all episodes will be available to watch on demand shortly after broadcast.