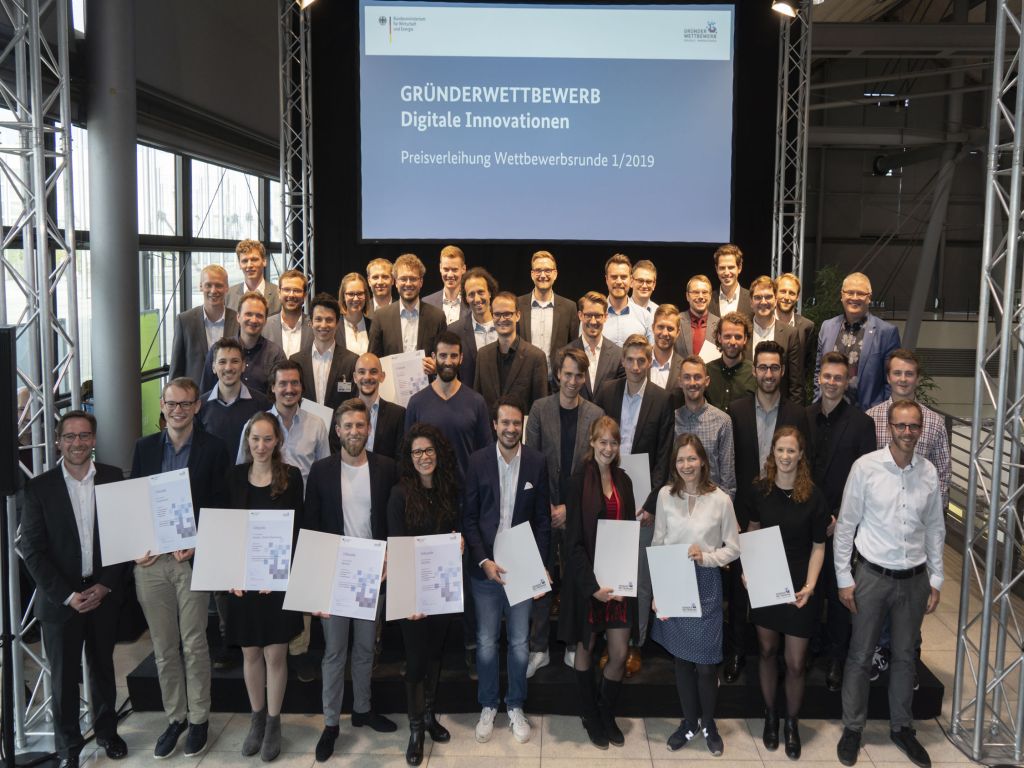 Awards presented to winners at EMO 2019 in Hanover

Hanover, 18.09.2019 – Improving energy management through artificial intelligence, using a smartphone for virtual sewing patterns, or saving human lives with a digitalised process chain: these are just some of the unique ideas with which start-ups were able to convince the jury of the “Founder Competition – Digital Innovations” organised by the Federal Ministry for Economic Affairs and Energy (BMWi). There was a further increase in the number of AI-based ideas submitted to the competition. The BMWi in cooperation with the VDW (German Machine Tool Builders’ Association) and the VDI Nachrichten magazine presented the awards to the winning teams at the EMO in Hanover on Tuesday.

Everyone is talking about artificial intelligence, smart data, cloud computing and augmented reality. The “second wave” of digitalisation and the wide range of start-ups are evidence that the spirit of invention unleashed by digitalisation is still very much alive. It is also demonstrated by the start-ups which received awards from the BMWi on Tuesday at the EMO in Hanover. Their innovative ideas cover a whole range of areas such as corporate energy management, industrial production, the manufacture of custom-made blood vessel prostheses, the secure networking of devices in the Internet of Things or the fashion sector.

Total prize money of over 300,000 euros was awarded to 21 new businesses from the digital industry. Six teams each received a main prize of 32,000 euros, with 15 further start-up teams receiving prize money of 7,000 euros each. In addition, the special “Digitalisation in Production” award was also presented, with prize money of 10,000 euros. In addition to the prize money, the winners benefit from individual coaching and mentoring through the “Founder Competition – Digital Innovations” network of experts.

Of the six main prize-winning teams, the etalytics start-up from Darmstadt had two reasons to celebrate: in addition to the main prize, it also took the “Digitalisation in Production” special prize.

– etalytics uses its AI-based cloud software to support industrial companies in making their energy management more sustainable, and thus reducing energy costs. The etalytics service platform consists of freely combinable modules. These provide all the tools needed for the computer-based optimisation of energy management and energy procurement, including everything from data connection, modelling and simulation through to recommendations for action and optimisation.

The five other award-winning teams in the main category:
– qbound offers an innovative access management solution for accessing applications, cloud services and devices on the Internet of Things (IoT). This solution is more secure and user-friendly than conventional VPN and firewall systems. In addition to blockchain, qbound also uses a concept called Software Defined Perimeter. This gives better protection to devices and applications connected to the Internet, but also renders them invisible unless or until they have been successfully authenticated. For IT system administrators, qbound enables straightforward monitoring, evaluation and adjustment of access authorisations in networks. The IT security software can be used across all industries and is offered for SMEs and large companies.

– The Pattarina augmented reality app from the Cottbus-based start-up of the same name allows hobby clothes-makers to transfer patterns directly from their smartphone to the fabric. The contours and markings of the patterns are superimposed on the live image of the fabric in the display. Users can then transfer the pattern onto the fabric using a marker. This eliminates the fiddly processes of cutting out, laying out and fastening paper patterns.

– The purpose of the self-learning assistance system of the Dresden start-up Peerox is to improve the pooling of knowledge among machine operators. The software combines data-based machine learning with the accumulated knowledge of experienced users and experts in the company. Based on learning-by-doing, the system supports the operators by acting as a virtual co-learning colleague who can offer advice in day-to-day production.

– The PerAGraft start-up from Aachen reduces the waiting time for custom-made blood vessel prostheses from up to eight weeks down to only five days. These prostheses are life-savers for aneurysm patients. This is made possible using a fully digital process chain based on computer tomography images of the patients. This permits extensive automation and considerable acceleration of order processing – from data input, design and simulation through to computer-controlled production of the individual implants. The PerAGraft technology can also be applied to other implant types.

– The sentin.ai vision assistance system developed by the Bochum start-up sentin permits image-based monitoring of safety-critical components or products for defects using artificial intelligence. The system learns whether a deviation from the standard is tolerable or should be rated as an error on the basis of previous images. The system can thus automate and accelerate the inspection process or give human inspectors more time for critical images by pre-sorting them.

The “Founder Competition – Digital Innovations” is an ideas competition organised by the Federal Ministry for Economic Affairs and Energy (BMWi). Two rounds of the competition are held each year. In each of these, a jury made up of scientific and business experts awards prizes to up to six start-up ideas, with main prizes of 32,000 euros each. A further fifteen start-up ideas also receive 7,000 euros each. The special prize is endowed with prize money of 10,000 euros and the topic changes each time. All participants receive a written assessment of their start-up idea as well as coaching and advice. The current round of the competition runs until 30 September 2019. Interested parties can submit an outline of their idea online. The start-up competition team can be contacted regarding questions about the competition: mail them at info@gruenderwettbewerb.de