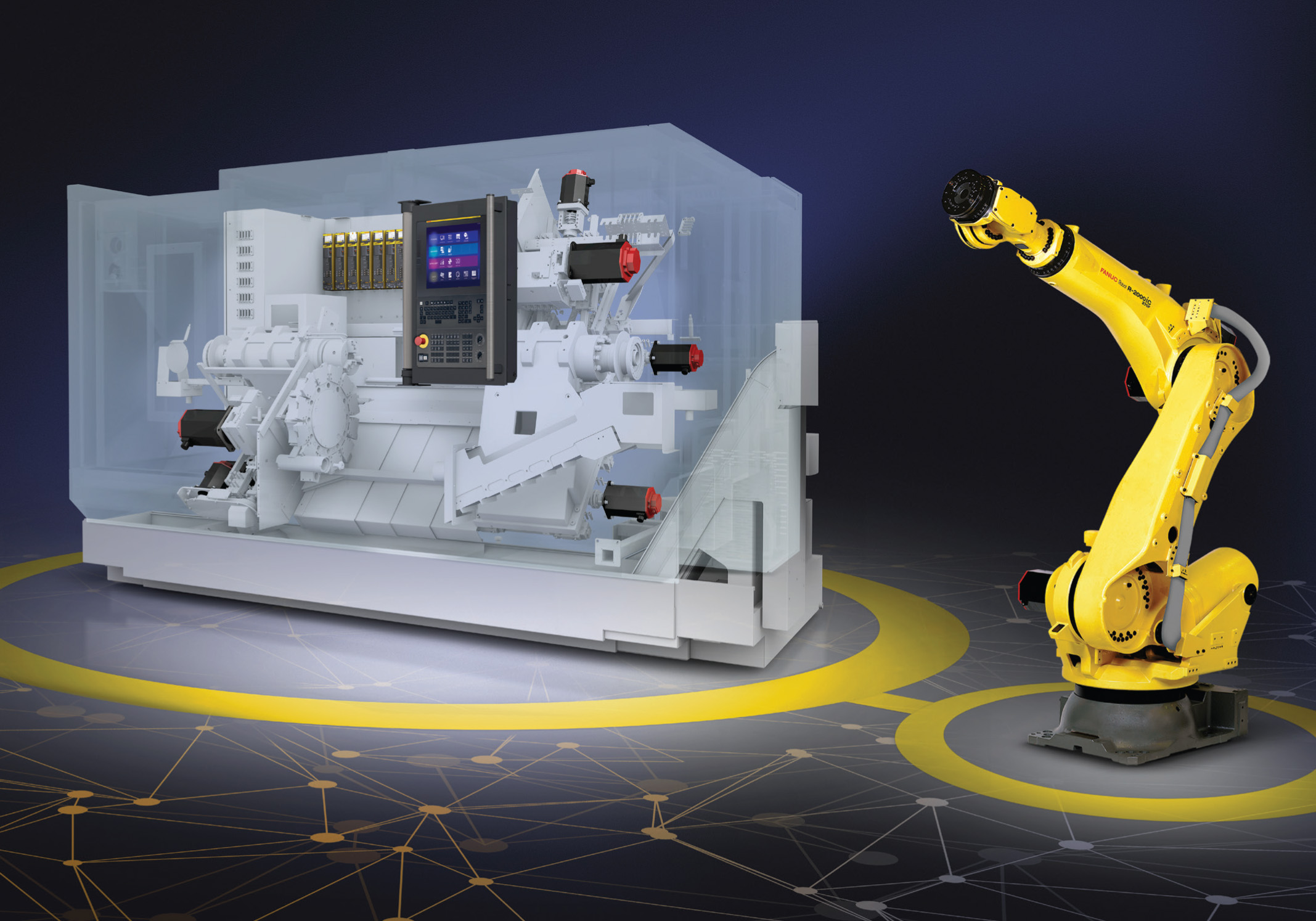 Echternach – FANUC will be heading to EMO 2019 with the remit of showcasing how easily automation can be integrated into all elements of production equipment, with a stand full of turn-key cells that can help end-users fast-track their facilities into a Smart Factory.

The company will use the opportunity to debut a host of new technologies from across its portfolio of industrial robotics, production machinery and CNC product ranges; all of which will be fully-operational on the stand, and supported by automation.

One of the stand-out attractions to visitors will be a full European debut for the company’s new Industrial Internet of Things (IIoT) platform, FIELD (FANUC Intelligent Edge Link and Drive) system. The FIELD system connects a broad range of FANUC and third-party production technology – including both new and legacy models – to provide fast, centralised access to all production data within a factory; helping end-users take a decisive step towards Smart Factory status.

Unlike other IIoT solutions, FIELD system is ‘edge-heavy’ which allows data to be collected and processed at source on the shop floor, rather than in the cloud, to give the operators access to much more accurate real-time data and analytics. FIELD system is fully scalable across multiple cells within a factory, to allow manufacturers to make informed and intelligent decisions that can drive tangible improvements in productivity.

PMA (Production Monitoring and Analytics) software is used to monitor the production and performance of all machines connected to FIELD system, including flagging any which are not operating at intended capacity, as well as facilitating waveform failure analysis. ZDT (Zero Down Time) continuously monitors the health of machines and can identify trends – such as torque changes or disturbances – with a view to informing operators when preventative maintenance action needs to be taken.

On FANUC’s EMO 2019 stand many machines, devices and robots will be connected to FIELD system to allow visitors to experience the system in action.

FANUC will also present a host of new tools and functions from its CNC and Drives portfolio at EMO. One of the star attractions is likely to be a the new ‘Edge Analyzing Unit’, which can be retrofitted onto any machine powered by FANUC CNC to provide a step-change in condition monitoring. It synchronously records data from both the CNC and a series of sensors that can be placed throughout the machine. The Edge Analyzing Unit then allows the user to analyse the collected data and to implement predictive maintenance based on the conclusions of the analysis.

Another new software innovation on display at EMO will be the AI Servo Monitor function, which analyzes and evaluates data from spindles and feed axes powered by servo drives. It is able to intelligently calculate an ‘anomaly score’ out of the data collected, and subsequently alert the operator if the threshold value has been exceeded. Operators can then schedule maintenance action before any long-term damage can occur.

Also making its European debut at EMO will be FANUC’s new ultra-precision turning centre, the ROBONANO α-NTiA. Developed to meet the growing global optical and medical device markets, but equally as deployable for high-accuracy aerospace and automotive applications, it is able to machine parts to within 0.1nm. With FANUC linear motor drives on the X- and Z-axis, the ROBONANO offers rapid feed rates of up to 1000mm/min. An optional B-axis provides the flexibility of an indexing table for more advanced applications if required. The α-NTiA is equipped with FANUC’s latest CNC, complete with a large touch screen control panel, as well as a hydraulic power unit and active floor vibration damper. Active water cooling and compressed air temperature control systems are included as standard, to improve long-term stability when machining.

Another must-see for visitors will be FANUC’s new software package, intended to help streamline the integration of robotics into the production process: QSSR (Quick and Simple Start-up of Robotization). The QSSR package helps simplify the connection of a robot to a machine tool, as well as the set-up and subsequent operation.

FANUC will also debut a number of new industrial robots at EMO 2019, including the M-10iD/12 and M-20iD/25 robots. The M-10iD will be used on a demo cell for loading and unloading, while the M-20iD will be used to support a deburring cell producing parts which will be used to manufacture future FANUC robots. Both robots benefit from exceptionally high axis speeds, while a rigid construction allows for excellent positioning and highly accurate repeatability. Both displays are supplemented by automated washing robot cells.

With a total of seven different applications running across the FANUC stand, its CR series of collaborative robots will also be a major attraction for visitors. The line-up will include every model in the CR-series, from the smallest CR-4iA to the CR-35iA.

A number of FANUC’s highly-popular ROBODRILL vertical machining centres will be presented on stand. Highlights include a cell combining two ROBODRILLS machining different components, with a single FANUC robot using AI bin-picking technology to locate the appropriate raw parts for each production cycle. Another ROBODRILL complete with high-speed rotary table and turning capability will be on stand simulating the machining of watch components, supported by a collaborative robot mounted on an automated guided vehicle (AGV).

Ideally suited to high-precision cuttings tasks mandated by the medical, as well as tool and mould-making industries, two models from FANUC’s ROBOCUT wire EDM machines will also be fully-operational on the EMO stand. The smaller α-C400iB model will be supported by a collaborative robot, complete with iRVision to identify the components that need to be machined. The larger α-C800iB is well-suited to the cutting or larger work pieces thanks to its 500mm Z-axis stroke and new advanced AI Thermal Compensation function, and will be live-cutting components for the aerospace sector on stand.

Completing the line-up of FANUC machines at EMO 2019 will be a ROBOSHOT α-S130iA full electric injection moulding machine. It will be producing components made from two different materials using the FANUC SI-20A second injection unit. The mould insert for this component is machined on a ROBONANO α-NMiA and the machine itself is automated with a FANUC Robot, once again underlining FANUC’s expertise across a broad portfolio of production equipment.

The FANUC Corporation is one of the world’s leading manufacturers in factory automation for CNC control systems, robots and production machines (ROBODRILL, ROBOCUT, ROBOSHOT and ROBONANO). Since 1956 FANUC has been the pioneer in the development of numerically controlled systems in the automation industry. With 264 FANUC sites worldwide and over 7,000 employees, FANUC offers a comprehensive network in sales, technical support, research and development, logistics and customer service.