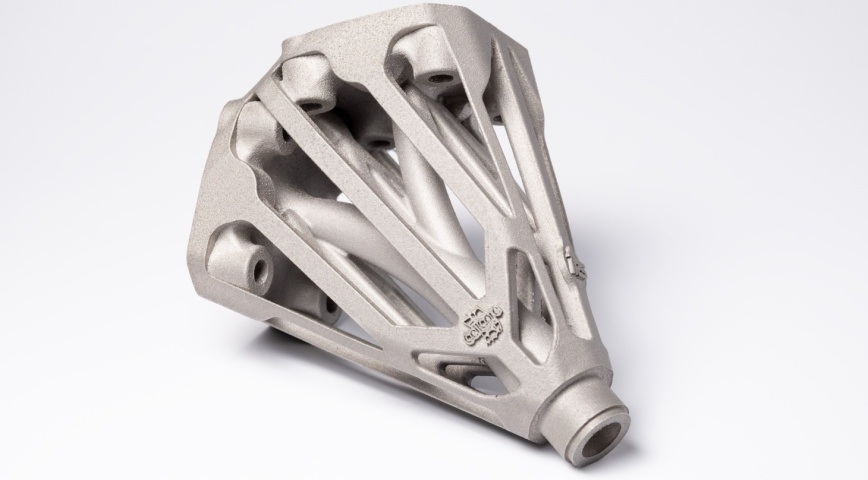 Frankfurt am Main, 20. May 2019 – There is an established tradition of young entrepreneurs presenting their new business models at EMO Hannover. Cell-Core, a company founded by Andreas Krüger and two of his colleagues at the end of 2016, is one of the exhibitors on the joint start-up stand supported by the Federal Ministry of Economics and Technology. Their business model is based on biomimetic engineering in which highly efficient natural structures, optimised by evolution over millions of years, are imitated (mimesis). The inventors develop these structures technically to enhance various components or products. This can make them lighter, more stable or more rigid – or all three simultaneously. CellCore supports SMEs from different sectors in all aspects from idea development through to the production of actual prototypes. 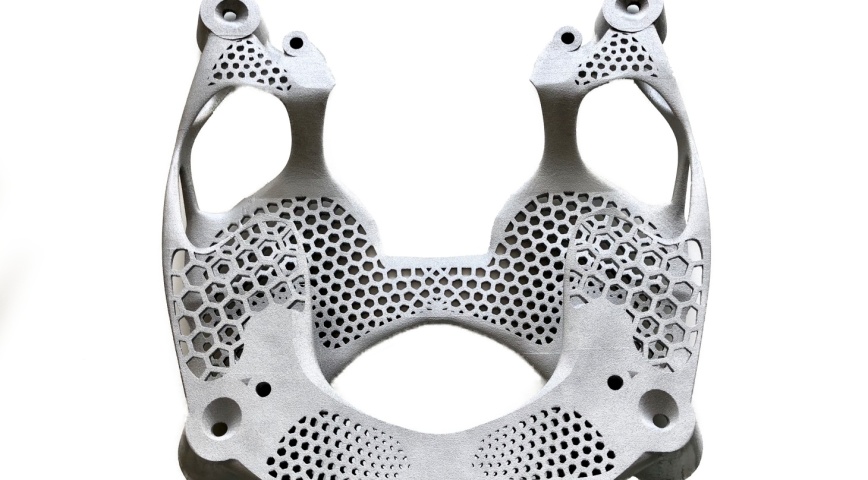 Travelling light into space
A good example is the injection nozzle for small satellite thrusters. Contributing their software and classic topology optimisation, CellCore employees joined forces with Trumpf Laser- und Systemtechnik GmbH and the Institute of Space Systems at the University of Stuttgart to design a prototype on the computer by calculating the optimum structures. The software identified the parts which had superfluous material because of the low levels of tension acting on them, and also calculated the parts where reinforcing structures are necessary. The functions of the nozzle – namely supplying fuel and damping vibrations – were factored in during the development process. Once a functional component with optimum properties had been created on the computer, the technicians could produce the first actual injection nozzle using 3D printing. “It took just two development loops for us to create a component that has since passed the required stress tests,” reports Andreas Krüger, CEO of CellCore. “The new nozzle is an impressive 83 per cent lighter than the original component.” In the coming months, the biomimetic injection nozzle will be deployed in space.

Boom in lightweight construction
CellCore also has customers in the racing industry, as innovative manufacturing processes also open new possibilities for the weight optimisation of individual components. For example, the company developed new wing elements for the rear spoiler of a racing car for the Formula Student Team at TU Berlin. At the heart of the optimised component was a special honeycomb structure which the young entrepreneurs printed in a single piece. The result was not only a 33 per cent reduction in weight, but also a 300 per cent increase in rigidity. The racing car with the optimised rear spoiler not only went on to achieve the best performance in the competition to date, it also won first prize in BASF’s “Best Use of Fi-bre Reinforced Plastics” design competition. The Berlin-based company designed the honeycomb element as a sandwich construction with a top layer of carbon. “What sets us apart is our broad-based application knowledge,” says Krüger, explaining the success of the start-up. “We have engineers from the aerospace, automotive and material science industries, but we also have software development expertise in our team 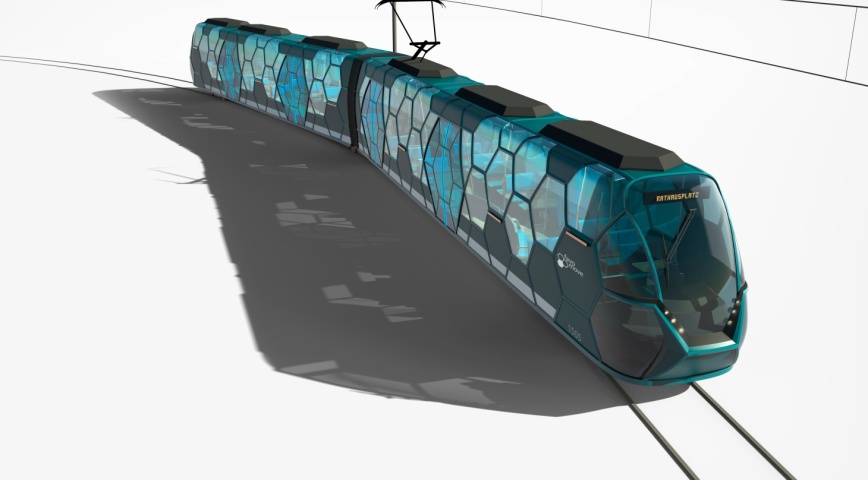 Supporting inspiration and creativity
For Krüger, the most fascinating things about his job are the variety of topics and the freedom to try out new things. CellCore’s experts are often called upon to help with specific design issues. Sedus Stoll AG – a classic manufacturer of office chairs – wanted new ideas for their chair bases. Up to now, cross-shaped structures have been used to connect the seat to the legs of the chair and thus hold the seated person. The CellCore engineers have now calculated a completely new shape. “In contrast to the old, cross-shaped die-cast base, they created a structure that is reminiscent of a pelvic bone. This allows us to use 21 per cent less material,” reports the CEO. “The development isn’t ready for series production because it isn’t yet cost-effective. But developments like the chair base highlight just what is possible.”

A contract with Industrie Designbüro Panik Ebner required similarly creative and forward-looking input. CellCore was able to help validate a novel tram concept thanks to its experience in handling various structures and running numerical simulations under different loads. The Panik Ebner concept reduces the weight by a significant amount while maintaining the same stability. This makes the tram car easier to move, which in turn saves energy. The tram is more spacious and offers large window surfaces for passengers thanks to the open honeycomb design. “We were able to provide the necessary theoretical underpinning for our customer’s innovative concept with regard to mechanical strength. They can now take our simulation results and talk to potential clients about the concrete implementation of the tram.”

No limits for bionic concepts
CellCore can provide technical optimisations for all industries. The company is currently working with medical experts on developing new types of orthoses – custom-made orthopaedic insoles, in particular. “We wanted to create automated production methods for insoles that are adapted to individual patients’ needs. 3D printing technology can deliver results which are perfectly matched to a particular foot,” says Krüger. “The current manual method of producing custom-made orthopaedic insoles is relatively cost-intensive, meaning that the higher price of 3D printing is not such an issue here.”

CellCore is also exploring potential areas of optimisation in toolmaking. With injection moulds, for example, a clever arrangement of cooling channels and the integration of special grid structures can increase production quantity and quality levels. New cooling techniques are also being investigated. CellCore is actively involved in research networks such as the Nowhum S network for optimised tools.

The sky is the limit when it comes to imagining areas in which biomimetic engineering can potentially be deployed. There may still be a number of drawbacks to additive manufacturing, especially with regard to the price, “…but we’re looking ahead and showcasing both what is already possible today and also the ways in which things could develop in the future.” The young Berlin entrepreneurs are already making use of learning algorithms. Does CellCore also work with artificial intelligence? “A clear yes and no!” replies Krüger. “For my taste, the term AI is very often used in the wrong context and accorded too much importance. One thing’s for sure, though: we do enjoy working with natural intelligence.”

EMO Hannover will be opening its doors from 16 to 21 September 2019 under the banner of Smart technologies driving tomorrow’s production!. The world’s largest trade fair for metalworking, EMO Hannover attracts the entire spectrum of user industries to Hanover. Exhibitors receive a great deal of attention from politicians, the media and industry. For innovative start-ups, the world’s leading trade fair provides a high-profile stage and an ideal place for networking. There are several ways in which young entrepreneurs can showcase their products and services at the fair. Firstly, there is the joint “Young Innovative Companies / Innovation Made In Germany” stand. This is sponsored by the Federal Ministry of Economics & Energy (BMWi) and the Federal Office of Economics & Export Control (Bafa). Young companies founded within the last ten years can exhibit here. The aim here is to provide maximum support for the marketing of innovative products and services by helping the companies take part in trade fairs. Such participation also helps boost exports. Alternatively, exhibitors can book a counter in the Young Tech Enterprise @ EMO Hannover Area. This is also open to international exhibitors who are not supported by the Federal Government. As a rule, these companies should not be more than five years old.

Exhibitors of either variant can participate in a forum for listening to and/or giving their own presentations. There are also pitch programmes and a large networking area.