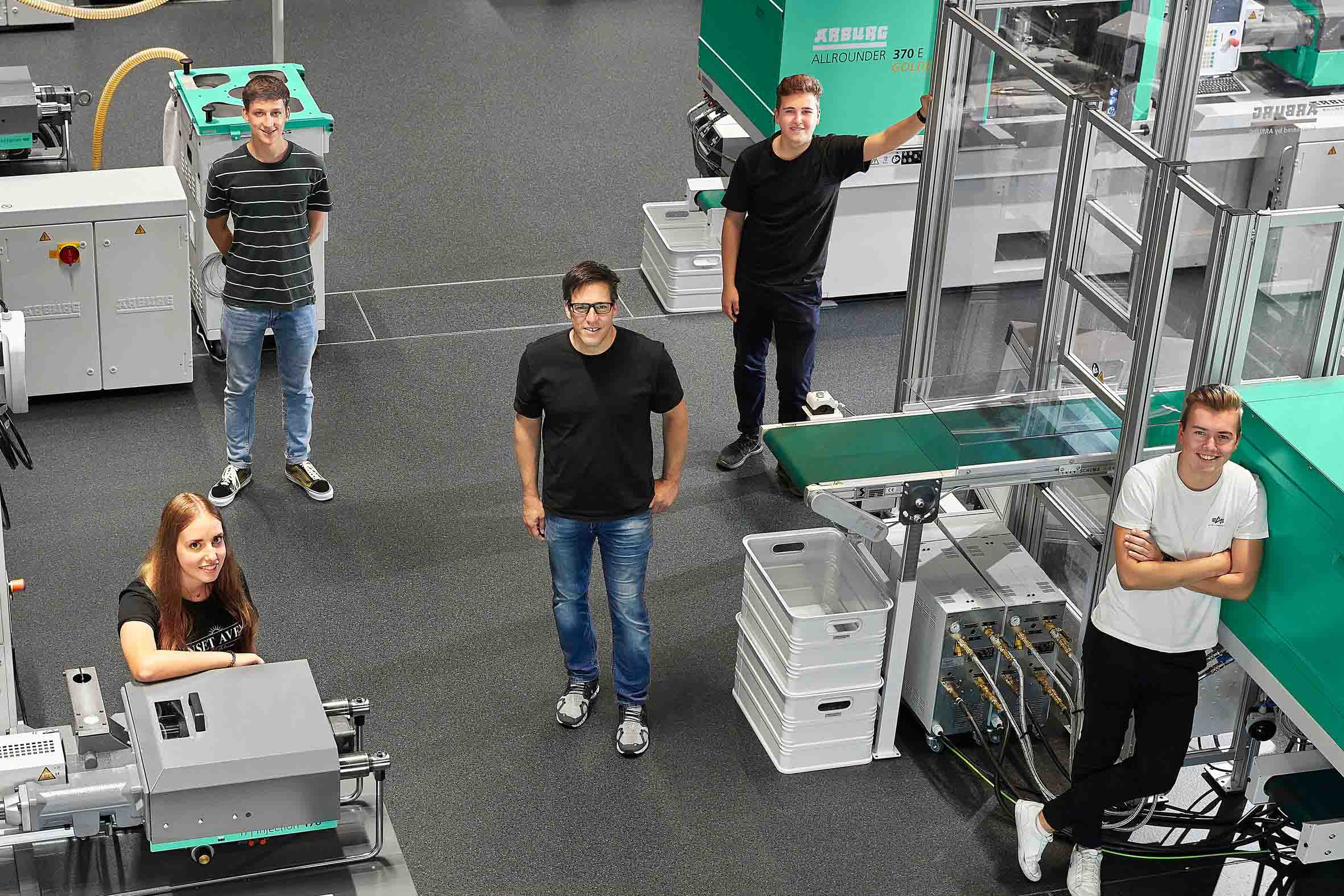 Owing to Arburg’s sophisticated safety and hygiene concept, four students from the Higher Technical Institute (HTL) in Bregenz, Austria, were able to complete a four-week internship at the Lossburg-based machine manufacturer in July 2020. The new Training Center provided the appropriate environment. With intensive support from Arburg trainers, the four prospective engineers were able to consolidate and further deepen their knowledge of plastics processing.

As a partner of HTL Bregenz, Arburg has been offering a four-week internship every year since 2008, which is always highly popular with students. They will complete their five-year secondary education at the Higher Department for Plastics Technology, qualifying as designers in plastics technology and product development. Afterwards they can go on to further study or enter the workforce directly in their chosen career.

Because of the positive experiences of their predecessors, Julia Amann, Raphael Fussenegger, Jonas Haerle and Lorenz Mathis had applied early and were delighted that their internship at Arburg could take place despite the current coronavirus situation. The four agreed in their feedback: Their high expectations were not only fulfilled, but greatly exceeded.

“The program and the support were exceptional,” emphasised Jonas Haerle. “We benefited from Arburg’s extensive expertise and state-of-the-art facilities in the field of training and development. We were first given a comprehensive theoretical grounding in the subjects which we then explored in greater depth in practice. It was the first time I had the opportunity to operate an injection moulding machine myself.”

Raphael Fussenegger shared his enthusiasm: “During a previous internship with an Arburg customer, I was able to experience Allrounders in practice. In Lossburg, I was then allowed to work directly on the machine. That was fantastic and has confirmed my decision to do vocational training in the field of in plastics technology. Incidentally, this choice was also made as a result of an earlier visit to the Arburg Technology Days”.

Superior knowledge thanks to Arburg

Julia Amann also emphasised the quality of the internship: “We were able to learn a lot during these four weeks and now have a clear advantage over our fellow students. The extensive guidance provided by the Arburg experts, together with the practical experience, was very helpful in understanding the processes of plastics processing in detail.”

“It was also great that we didn’t only work on Allrounder injection moulding machines,” added Lorenz Mathis. “Since robotic systems and the Freeformer were also part of the agenda, we were able to expand our knowledge about the topics of the future, such as automation and additive manufacturing.”

Partner from the start

Arburg has been cooperating with the HTL Bregenz since 2007 and, at the time, was the first machine manufacturer to support the educational institution in including the plastics sector in the school’s curriculum. In 2008, a hydraulic Allrounder 370 S with Multilift V robotic system was installed in the Technical Center. In 2017, this system was replaced with an electric Allrounder 470 E with Multilift Select robotic system. The automated Arburg injection moulding machine is used in workshop and production technology as well as in laboratory lessons. Among other things, the students learn how to set up and start the Allrounder, and they become familiar with the details of how process parameters influence part quality and part properties, statistical test scheduling and prototyping, as well as process optimisation. In addition, Arburg has already held several plastics technology courses at HTL Bregenz, all of which were very well received by the injection moulding companies in the Vorarlberg region.

German family-owned company Arburg is one of the world’s leading manufacturers of plastic processing machines. Its product portfolio encompasses Allrounder injection moulding machines with clamping forces of between 125 and 6,500 kN, the Freeformer for industrial additive manufacturing and robotic systems, customer- and industry-specific turnkey solutions and further peripheral equipment.

An international sales and service network ensures first-class customer support at a local level: Arburg has its own organisations at 34 locations in 26 different countries and, together with its trading partners, is present in more than 100 countries. Its machines are produced exclusively at the parent company in Lossburg, Germany. Of a total of roughly 3,200 employees, around 2,650 work in Germany. About 550 further employees work in Arburg’s organisations around the world. Arburg has triple certification, in accordance with ISO 9001 (quality), ISO 14001 (environment) and ISO 50001 (energy).