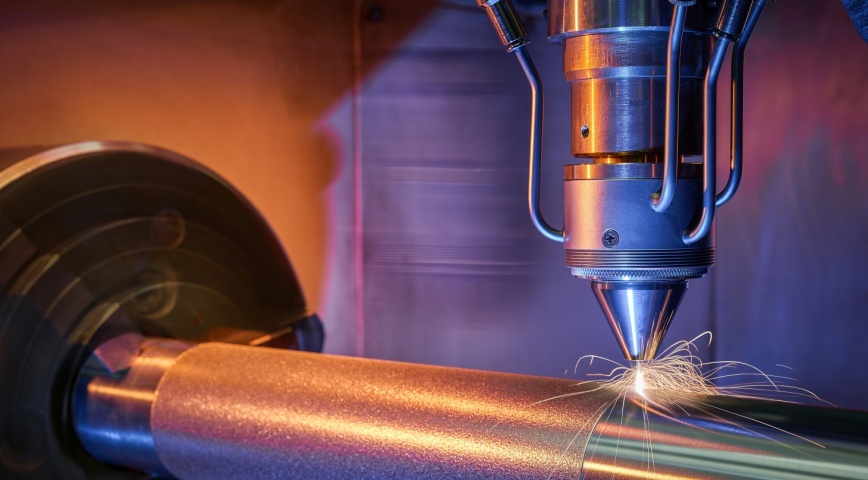 Frankfurt am Main, November 2018. – The new process for extreme high- speed laser deposition welding (Ehla) is a genuine success story: intensive de- velopment in Aachen from 2012, consistent implementation and testing of the system technology in the Netherlands followed by industrial implementation in China. And on 21 September 2018, the process developed by the Fraunhofer In- stitute for Laser Technology ILT in Aachen and the Chair of Digital Additive Pro- duction DAP at RWTH Aachen University in Ditzingen was awarded the Berthold Leibinger Innovation Prize. Starting in 2000, the prize has been awarded every two years for outstanding research and development work on the application or generation of laser light.

The instructions for building what is probably the world’s fastest laser coating sys- tem are actually very simple: take a CNC lathe and then install a laser beam source, a processing head and a powder feed system – and that’s it. This ingen- ious use of additive manufacturing technology will be officially presented at EMO Hannover 2019.

The new process solves a problem familiar to manufacturers of highly stressed metal components in particular. They have to coat components to prevent corro- sion or wear. There are extremely rigorous demands, for example, on coatings for meter-long offshore cylinders which rust and wear quickly in the sea due to the saline environment. However, the usual coating processes – hard chrome plating, thermal spraying and deposition welding – have their disadvantages.

Even laser deposition welding has also only been able to establish itself in iso- lated cases.

The most common process to date for wear and corrosion protection has been hard chrome plating with chromium(VI), but this has been included in the EU Chemicals Regulation EC 1907/2006 (REACH) because of its harmful effects on the environment. As a result, since September 2017 it has only been possible to use it with special authorisation or approval. IHC Vremac Cylinders B.V. from Apeldoorn (Netherlands), which produces hydraulic cylinders with piston rods up to 10 m in length, was confronted with this problem. The rods are used under ex- treme heavy-duty conditions in excavators, offshore plants, civil engineering and heavy machinery applications.

“For some time now we have been looking for new companies who can apply high quality ductile and harder coatings,” explains Andres Veldman, Engineering Manager at IHC Vremac Cylinders. Electrolytic processes are suitable for ductile coatings, whereas high-velocity oxygen fuel (HVOF) spraying is a possible solu- tion for hard coatings. But the Apeldoorn company also decided to look at the use of lasers. Initial investigations in 2006 revealed that normal laser deposition weld- ing is too expensive and too complicated. “Nevertheless, we were convinced that this process had a promising future,” recalls Veldman.

He wasn’t wrong: the process finally achieved its breakthrough largely thanks to an innovation in process control that enables much higher coating speeds. The filler metal is melted directly in the laser beam and not in the weld pool. The re- sult? EHLA coating with process speeds of up to 500 m/min. Typical rates  previously were 0.5 to 2 m/min. Ehla also allows much thinner layers to be ap- plied. Whereas previously only layers over 500 micrometres were possible, thin layers of between 25 to 250 micrometres can now be obtained. In addition, the layers are smoother and the roughness has been reduced to a tenth of the typical value for laser deposition welding.

But the Aachen-based developers also owe their market success to two resolute pioneers from the Netherlands. In their search for a system manufacturer, the sci- entists came across the relatively young company Hornet Laser Cladding B.V. from Lexmond (Netherlands). They had established close ties with its founders – Jelmer Brugman and Frank Rijsdijk – over many years. The first Ehla plant was set up in their factory in 2014. This was basically an enhanced automatic lathe.

Thomas Schopphoven, head of the “Productivity and Systems Technology” team in the Laser Deposition Welding group at the Fraunhofer ILT, explains the back- ground: “The advantage for the coating of rotationally symmetrical components is that the necessary components – the laser beam source, Ehla processing head and powder feed system – can easily be integrated, including into the control sys- tem.”

Process already in international use

The results of the collaboration between Fraunhofer ILT and Hornet convinced IHC in Apeldoorn. “A completely new system was created based on a type of lathe that we were already using in Apeldoorn,” Veldman recalls. “What was in- genious about it was that, if necessary, we could have used it as a lathe, which meant we had a plan B. Procurement and conversion of the lathe to the approxi- mately 14-metre-long Ehla plant, followed by installation and commissioning, took just under six months.”

The Dutch have already started series production. Now that a number of projects have been completed, Veldman reckons that the process currently costs roughly the same as thermal spraying. He estimates that it will become cheaper once the finishing processes have been optimised. However, the company has already been able to convince customers in the offshore sector, for example, about the benefits of the new coating. It has had Ehla certified to DIN EN ISO 15614-7 by Lloyd’s Register (LR), the risk management organisation. Veldman: “The experts were initially very sceptical because we had only tested thin layers down to 200 micrometres in the laboratory, which were then ground down to 150 to 100 micro- metres. We wanted to make sure that the coatings provided good corrosion pro- tection even after wear.” The IHC experts knew what they were doing. Since 2015, the company has coated several hundred hydraulic cylinders with heavy- duty, wear- and corrosion-resistant alloys for offshore use worldwide, with lengths of up to 10 m and diameters of up to 500 mm.

Trumpf Laser- und Systemtechnik GmbH from Ditzingen is also aware of the large number of possible applications and now offers laser systems which include EHLA processes for different component sizes. The fast and environment-friendly technology is also attracting attention outside Europe. Chinese users have also started using the process recently. Chen Hong, Managing Director of ACunity GmbH from Aachen, a spin-off of Fraunhofer ILT, explains: “There is great de- mand for the EHLA process because China is looking to regulate hard chrome plating based on the European model in the next two years.” Accordingly, in 2017 the spin-off entered into a strategic cooperation with the China Academy of Ma- chinery Science and Technology Group Co, Ltd. (CAM) in Beijing and supplied a 5-axis system with EHLA nozzle technology adapted by Fraunhofer ILT. After the successful projects for CAM in Beijing, Hebei Jingye Additive Manufacturing Technology Co. Ltd. ordered two systems for the external coating of offshore hy- draulic cylinders of up to five-metres in length with a maximum diameter of one meter, as well as another system for internal coating. After the initial success of the EHLA process in China, Managing Director Hong is optimistic that orders for five to ten turbines from the offshore industry will follow soon. This will also see a change in the production method. Whereas previously it was all about creating tailor-made machines, the emphasis now is developing a modular system for small, medium to very large plants.

In addition to Ehla, other new processes are also being created – such as laser- based deposition of nanostructures (Laser-4-Fun project, www.laser4fun.eu), or further developments of conventional processes such as tungsten inert gas or  plasma powder deposition welding (PTA). “Worldwide, however, there is no other coating process for the application of high-quality, thin layers bonded by metallur- gical fusion which is as flexible, resource-efficient and at the same time economi- cal as EHLA,” emphasises Schopphoven. “The form-fit joint yields clear ad- vantages over coatings applied by thermal spraying or electrochemical processes which suffer from very limited coating adhesion.”

From 16 to 21 September 2019, international manufacturers of production technology will be spotlighting smart engineering at the EMO Hannover 2019. Under the motto of “Smart technologies driving tomorrow’s production!”, the world’s premier trade fair for the metalworking industry will be showcasing the entire band- width of modern-day metalworking technology, which is the heart of every industrial production process. The fair will be presenting the latest machines, plus efficient technical solutions, product-supportive services, sustainability in the production process, and much, much more. The principal focus of the EMO Hannover is on metal-cutting and forming machine tools, production systems, high-precision tools, automated material flows, computer technology, industrial electronics and accessories. The trade visitors to the EMO come from all major sectors of industry, such as machinery and plant manufacturers, the automotive industry and its component suppliers, the aerospace sector, precision mechanics and optics, shipbuilding, medical technol- ogy, tool and die manufacture, steel and lightweight construction. The EMO Hannover is the world’s most important international meeting point for production technology specialists from all over the planet. The EMO Hannover 2017 attracted almost 2,230 exhibitors from 44 different countries, and around 130,000 trade visitors from 160 nations. EMO is a registered trademark of the European Association of the Machine Tool Industries Cecimo.