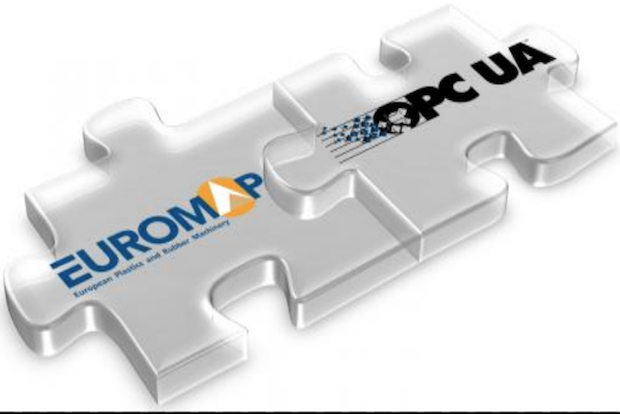 Orlando, 8 May 2018 – EUROMAP 77 is the first OPC UA based interface for plastics and rubber machinery. It will be used for the connection of injection moulding machines to central computers/MES. EUROMAP 77 has been released on 4 May 2018 and is available on www.euromap.org. During the EUROMAP-Press Tour on 8 May 2018 at the NPE in Orlando machinery manufacturers will demonstrate the advantages of standardized interfaces for the users.

To increase production efficiency, more and more plastics processors bet on Industry 4.0, the digital connectivity of machines and components. In most production facilities equipment of different manufacturers is used. If the processor can access standardized interfaces when connecting, the high configuration effort for adapting individual solutions becomes obsolete.

EUROMAP, the European Association for plastics and rubber machinery manufacturers, develops these standards for cross-manufacturer communication, based on OPC UA.

“Industry 4.0 stands for intelligent and digitally connected systems where data exchange across system boundaries should be possible. OPC UA, as an established standard, has the precondition to allow communication between acting and collecting systems and is, therefore, an important part of Industry 4.0,“ confirms Jonas Schwarz, Product- and Technology Manager at KraussMaffei.

Compared to its predecessor EUROMAP 63, EUROMAP 77, which has been released on 4 May 2018, offers extended functionality to enable state of the art digital communication, thus paving the way for Industry 4.0. With EUROMAP 77, machines from different manufacturers can be easily connected in one network for monitoring and production data acquisition, management of jobs and transferring whole datasets for machine settings.

Prototypical implementations of the Release Candidate have been available since spring 2018: The standard had been thoroughly tested during two Plugfests by the companies that were involved in the development.

Connected production is not only about collecting as much data as possible but also to organize and interpret them in an intelligent manner. The Manufacturing Execution System – MES – plays a central role regarding the organisation of the data transfer. Heinz Gaub, Managing Director Technology & Engineering at Arburg, explains: “For the digitalization of production in the sense of a ‘smart production‘, standardized interfaces are an important precondition for using various Connectivity-Modules, like MES, and to transfer, analyze and exchange large amounts of data consistently.“

Only then, the collected data will have the desired added value for the user. EUROMAP 77 will prove this also in serial implementations, all of those involved are convinced.

EUROMAP as driving force for the development of further standards

The manufacturers of plastics and rubber machinery jointly work under the umbrella of EUROMAP to advance the developments of further open standards for digital interfaces. They regard joint standards for the broad and successful implementation of Industry 4.0 as a central precondition.

“Only standardization allows to globally exploit the opportunities offered by Industry 4.0 and to generate added value for our customers. Without a common language across all participants in the supply chain, we will not be able to master the complexity the Internet of Things brings, among other things,” emphasizes Dr Gerhard Dimmler, Head of Research and Development Products at ENGEL AUSTRIA.

Georg Tinschert, CEO of Wittmann Battenfeld, adds: “A special challenge for industrial networks today is real-time communication. The new EUROMAP standards take this into account, if necessary. The EUROMAP Recommendations have been recognized for decades in the global plastics industry. We think it is likely that the new interface standards will be internationally successful.“

Holistic concept of standardization: Including periphery

EUROMAP works on a holistic concept and takes into account the connectivity of the complete production chain, that means, also the periphery, when developing the standards. In progress are, amongst others,

With EUROMAP 84: Data transfer between extrusion lines and MES, the first digital interface standard for extruders is being developed. Standardized interfaces decrease complexity, so the focus can be on the benefits of Industry 4.0 and not on how to integrate different interfaces for the application. This is also valid for extrusion lines.

Dr Henning Stieglitz, CTO, BC Extrusion Holding (battenfeld-cincinnati), confirms: “We see EUROMAP 84 not only as a chance for our customers and for us to decrease complexity, but we also see it as an important step in creating more efficient and sustainable production processes.”