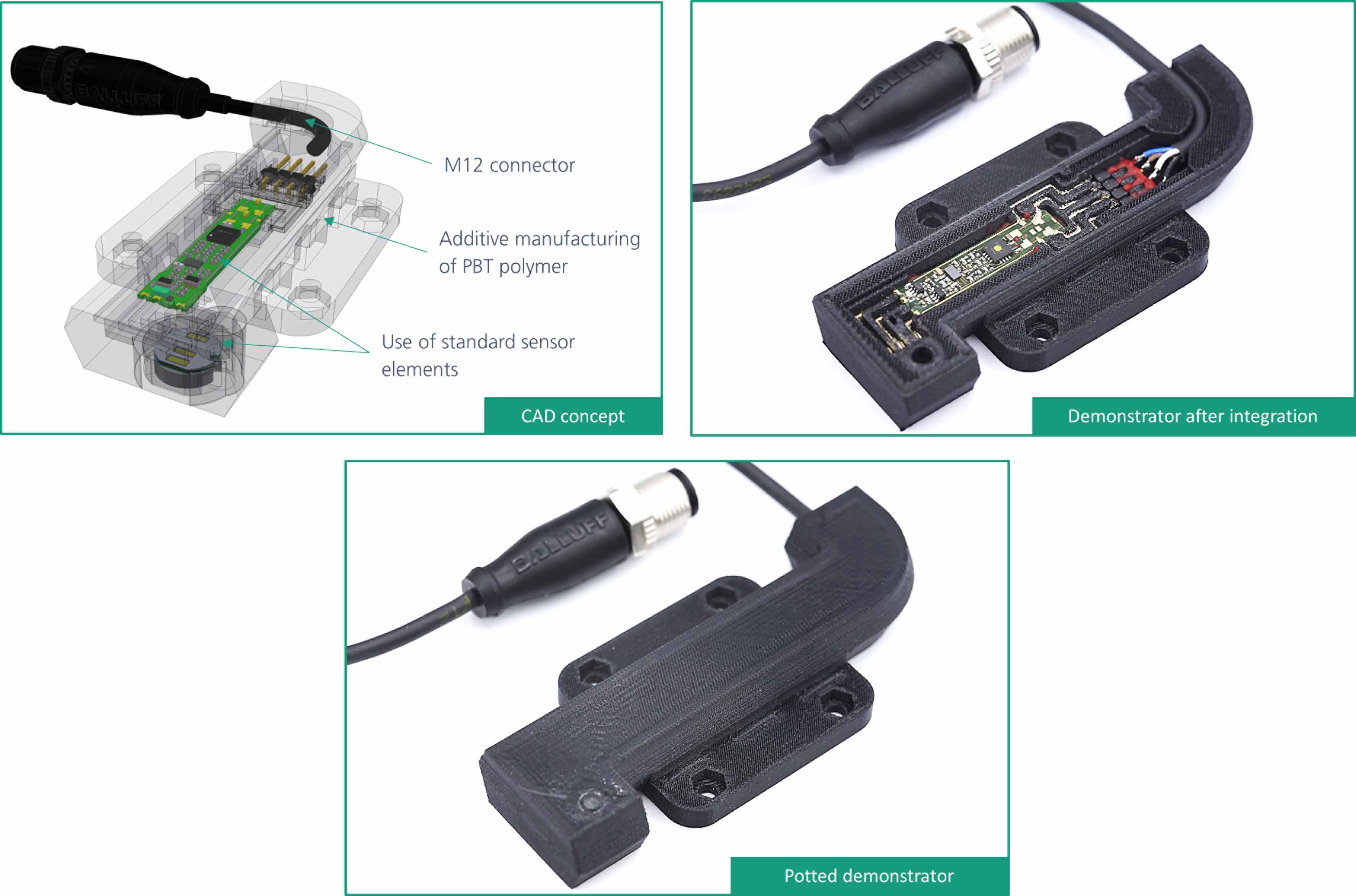 3D-printing is becoming increasingly important in industrial manufacturing. It not only makes it possible to produce very complex shapes that would otherwise be virtually impossible to generate using conventional processes, but also enables small batch numbers to be produced on a cost-effective basis. However, up to now, the integration of electronic components and consequently, the production of customized sensors has presented a challenge. Now, together with the Baden- Württemberg-based companies ARBURG and Balluff, Fraunhofer IPA has achieveda breakthrough.

Sensors in individualized form are interesting for tasks in automation technology, as they can be used flexibly for a variety of applications. Inductive proximity sensors are available in cylindrical metal casings in which a coil, a circuit board and a plug are installed in a fixed configuration – a standard component with a fixed geometry. In automation technology, inductive proximity sensors are used in great numbers for non-contact detection of metal objects. In industrial applications they can not only register the proximity of a component, but also at what distance it is located. However,
due to the shape of the casings, inductive proximity sensors for integration in specific environments – robotic arm gripper fingers, for example – had not yet been developed until now.

A casing of any shape

The question therefore arose: Why not print the sensor casing in plastic so that it can be manufactured in any shape? This is exactly what a research team from the Centre for Additive Production at the Fraunhofer Institute for Manufacturing Engineering and Automation IPA has now achieved. The team was supported by colleagues from the plastics processing machine manufacturer ARBURG GmbH & Co. KG and the sensor and automation specialist Balluff GmbH. A plastic with high dielectric strength and flame-retardant properties was required for the sensor casing. The experts opted for semi-crystalline plastic polybutylene terephthalate (PBT), which is used as standard injection molding material for the production of electronic casings. However, this type of material had not yet been used for 3D printing, necessitating work of a pioneering nature.

The plastic was fed in granulate form into a “freeformer”, ARBURG’s industrial additivemanufacturing system, which uses a material preparation unit with a special plasticizing screw. After melting the standard granulate, the freeforming process, which uses no molds, followed: A high frequency nozzle closure discharged tiny plastic droplets, which could be precisely positioned with the aid of a movable part carrier.

In this way, the freeformer created three-dimensional components with cavities layer by layer, into which components could be inserted during the printing process. To make this possible, the freeformer automatically interrupted the process at each respective layer, so that the coil, circuit board and plug could be integrated very precisely. In a separate process, a dispenser was then used to produce the silver conductor tracks inside the casing. To complete the process, all that was needed was to overprint the cavities and then pot them in polyurethane.

The team produced more than 30 demonstration models of customized sensors in this way and then put them through their paces: the components had to be able to withstand temperature changes and vibrations, they had to be waterpr oof and pass an electrical insulation test. By optimizing the design and manufacturing process, the tests were ultimately completed successfully.

The “Electronic Function Integration in Additively Manufactured Components” research project ran for eighteen months. Stefan Pfeffer, who led the project at Fraunhofer IPA, is currently working with ARBURG on research into how conductive plastics can also be used in the future to tap into additional application areas.

With nearly 1 000 employees, the Fraunhofer Institute for Manufacturing Engineering and Automation IPA, Fraunhofer IPA, is one of the
largest institutes in the Fraunhofer-Gesellschaft. The total budget amounts to more than € 74 million. The institute’s research focus is on organizational and technological aspects of production. We develop, test and implement not only components, devices and methods, but also entire
machines and manufacturing plants. Our 15 departments are coordinated via six business units, which together conduct interdisciplinary work with
the following industries: automotive, machinery and equipment industry, electronics and microsystems, energy, medical engineering and biotechnologyas well as process industry. The research activities of Fraunhofer IPA aim at the economic production of sustainable and personalized products.