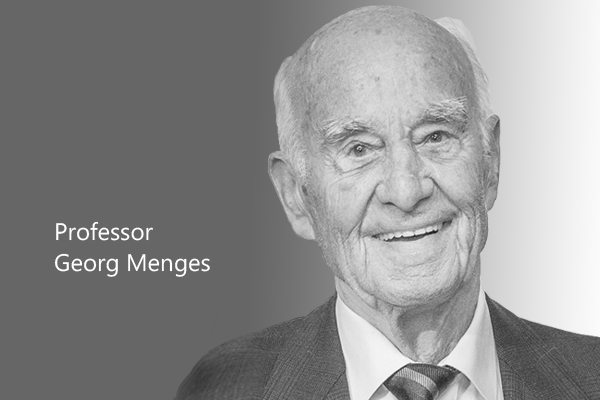 On 28 February 2021, our extremely esteemed colleague, teacher and friend

passed away in the presence of his family.

Professor Menges was born in Gernsbach/Baden and, after serving in the war and spending several years as a prisoner of war, studied mechanical engineering from 1949 at the then Technical University of Stuttgart, where he gained his doctorate (Dr.-Ing.) with his thesis on the brittle fracture behaviour of metals. He subsequently took up employment in the iron and steel industry, but soon turned to the upcoming plastics industry and, in 1965, was appointed to the newly established Chair for Plastics Processing of TH Aachen, which he held until he became professor emeritus in 1989. At the same time, he was appointed head of the Institute for Plastics Processing at RWTH Aachen University.

Professor Menges quickly established himself as the creative driving force and dynamic manager of the rapidly growing institute, and succeeded in winning numerous firms in the still young plastics industry as cooperation partners and members of the IKV Sponsors’ Association. He recognised the benefits of combining science with industry at a very early stage, and developed it further to make this the mission statement and brand essence of IKV. With the rapidly increasing demand for plastics, the field of plastics technology also developed as a scientific discipline, and Prof. Menges established IKV as a leading research and training institute devoted to the entire range of topics from materials technology and design engineering to the various processes for the processing and machining of plastics. During this time, he brought new developments and methods from neighbouring disciplines to plastics technology. In motor research, for example, he came across a pressure sensor which he developed in cooperation with the industry as a cavity pressure sensor. He was a pioneer of automation and played a key role in making Computer Integrated Manufacturing – as a precursor of Industry 4.0 – accessible to plastics technology, although he was initially laughed at because of his attempts to control injection moulding processes with (room-sized) computers. Apart from that, Prof. Menges recognised at an early stage the opportunities resulting from the deployment of numerical simulation processes for calculating heat and material transfer in plastics processing processes, and developed corresponding programs at IKV. After retiring from active service, Prof. Menges devoted himself in particular to the recycling of plastics, initiated numerous projects on the subject, worked on patents and also wrote books on the issue.

The increasing demand for qualified plastics engineers induced Prof. Menges to work on setting up an independent course of study, with the result that, at RWTH Aachen University in 1970, the “Plastics Technology” course was offered for the first time at a university. Unconventional teaching methods – for example, an injection moulding machine once had to be brought into the lecture theatre for demonstration purposes – the practice-oriented training courses and his unique charisma led to a lively response, with the result that, at the end of his active career, Prof. Menges had seen more than 1,000 engineers graduate with a diploma and over 200 doctorates awarded during his time in office. Apart from the sound technical training, the important aspect for him was to develop personalities that can assume responsibility in industry and science. With this claim and his enormous commitment as a mentor and advisor, many graduates from IKV have assumed key management positions in the plastics industry and in research. In particular, Prof. Menges supported start-ups and accompanied graduates and postgraduates on their way to economic independence.

For his merits in the field of plastics technology, Menges received numerous high national and international awards. Of particular note, because they reflect the extent of the appreciation of his work, are the award of the Order of Merit of the Federal Republic of Germany, first class, the golden handicrafts insignia, membership of the Plastics Hall of Fame of the Plastics Academy, USA, and the award of an honorary doctorate from the Montan University Leoben.

In Professor Menges, RWTH Aachen University and IKV have lost a committed pioneer and a special friend. We will always honour and cherish his memory.