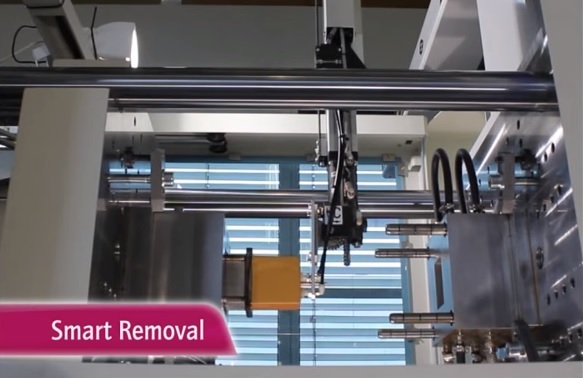 Minimization of unproductive downtimes is a top priority for injection molding machine operators, since this is the only way to have the investment in the machine amortized in the shortest possible time. The WITTMANN W8 and WX robot generations come with the patented SmartRemoval function as standard, which automatically shortens the time required for parts removal from the mold area without any operator intervention. 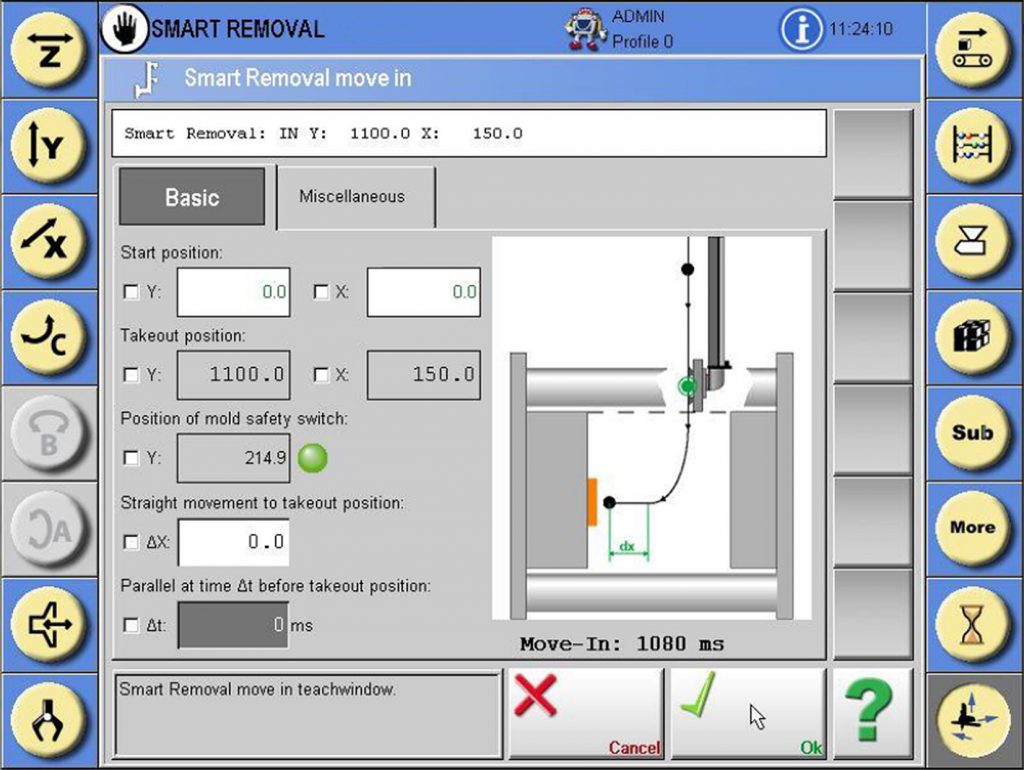 Visualizations of SmartRemoval Move In 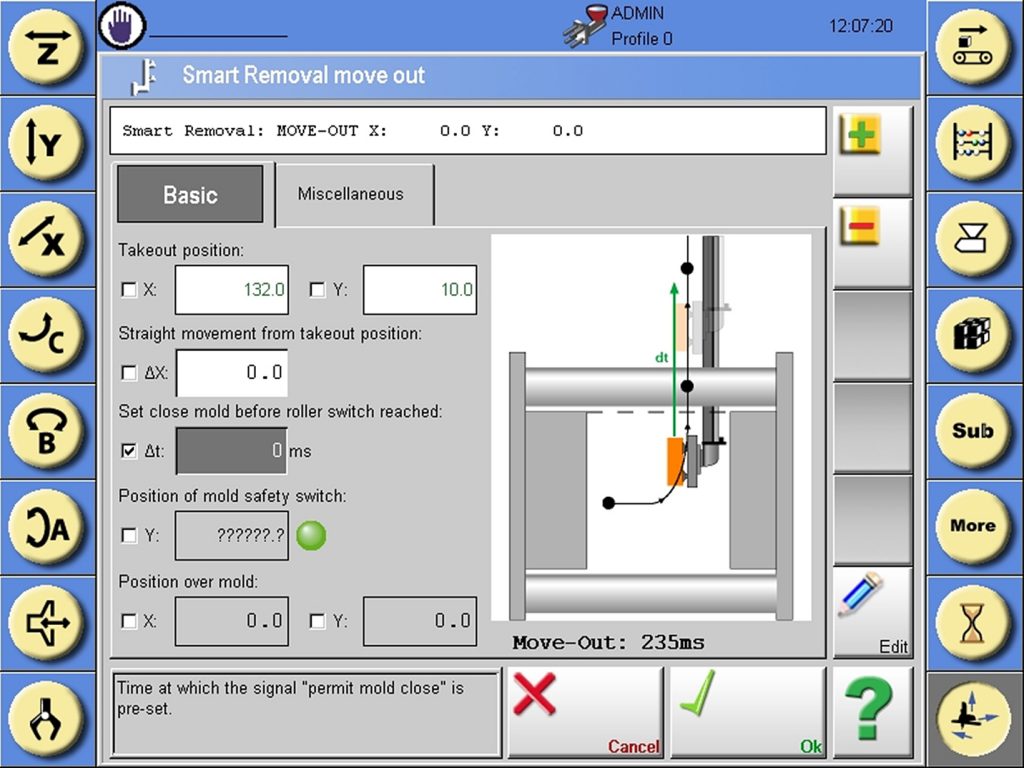 SmartRemoval Move Out on the WITTMANN R8 robot control system.

The advantages are obvious: shortening of the unproductive time plus lower total energy consumption for the system through reduction of the heat loss caused by the mold standing open for any length of time, which ultimately also contributes to more consistent process quality. Here, the injection molding process as such is basically left completely untouched, since SmartRemoval only influences the time required to remove the part from the machine. All parameters set on the processing machine remain unchanged.

How does the patented WITTMANN SmartRemoval function work?

The R8 and R9 robot control systems from WITTMANN automatically calculate from the first cycle how long the mold opening movement will take. Then, in all subsequent parts removal processes, the system no longer waits for the complete opening of the moving mold half, but instead already starts to move the vertical axis of the WITTMANN robot beforehand, just like the “flying start” known from motor sport. At the moment when the mold is fully opened, the axis is already moving at an optimal speed and can be accelerated still further for the actual removal process inside the open mold area. So, in contrast to the conventional sequential removal process, the gripper of the robot arrives earlier at the position where the transfer of the molded part takes place.

The synchronization with the ejectors functions in a similar way. Based on previous automatic measurements, the WITTMANN robot already issues the ejector signal before it arrives at the parts removal position, so that when it reaches that position it can take over the parts directly without having to wait for the ejectors’ response. This process is designated as “Move In”. In the subsequent “Move Out” phase, the ideal timing to send the machine the “close mold” signal – before the WITTMANN robot has moved completely out of the mold area – is calculated in a similar way. The aim of these measures is to eliminate from the process the delays caused by electrical signal transmission. The patented SmartRemoval function is included in the standard scope of delivery for WITTMANN R8 and R9 control systems. 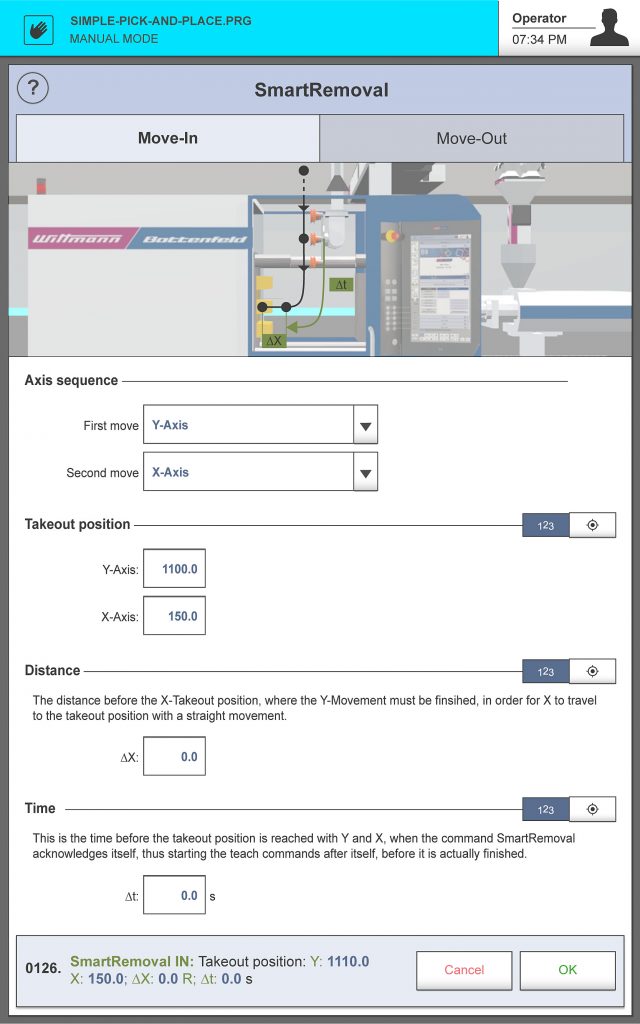 Input mask for SmartRemoval Move In 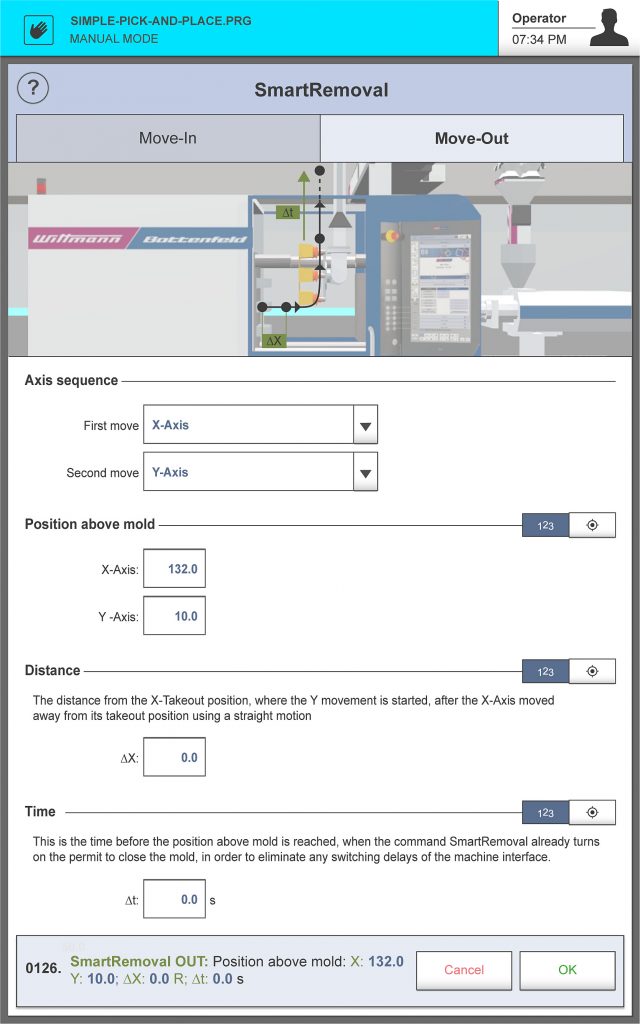 SmartRemoval Move Out on the WITTMANN R9 robot control system

What savings are possible?

In an identical program sequence with, say, 1.0 s parts removal time, 0.2 s can be saved by using a small robot from the W818* series, that is, about 20%. With larger models, such as the WITTMANN WX173** robot, a shortened parts removal time of 1.2 s instead of 1.7 s is reached in similar test arrangements, that is, a reduction of almost 30%!

*    Mainly for injection molding machines with 80 to 200 t clamping force.

The WITTMANN Group is a worldwide leader in the manufacturing of injection molding machines, robots and peripheral equipment for the plastics industry. Headquartered in Vienna/Austria, the WITTMANN Group consists of two main divisions, WITTMANN BATTENFELD and WITTMANN, which operate 8 production facilities in 5 countries, including 34 direct subsidiary offices located in all major plastics markets around the world.

WITTMANN BATTENFELD focuses on the independent market growth in the manufacturing of state-of-the-art injection molding machines and process technology, providing a modern and comprehensive range of machinery in a modular design that meets the actual and future requirements of the plastic injection molding market.

The syndication of the WITTMANN Group has led to connectivity between all product lines, providing the advantage plastics processors have been looking for in terms of a seamless integration of injection molding machines, automation and auxiliary equipment – all occurring at a progressive rate.