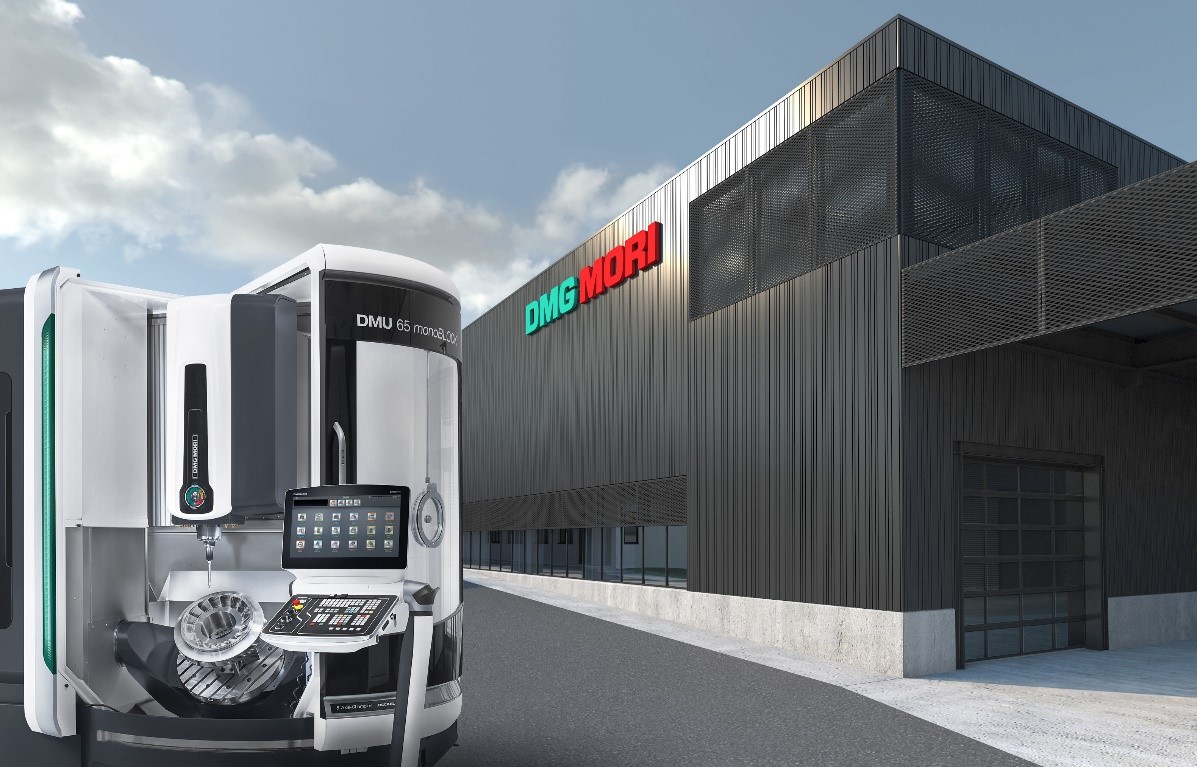 Groundbreaking assembly concept: DMG MORI revolutionizes the production of monoBLOCK 5-axis machining centers with its new 4,000 m² Excellence Factory at DECKEL MAHO Pfronten. The flow assembly with an Automated Guided Vehicle (AGV) transport system results in a productivity increase of 30 %. This is also to the customers’ benefit.

“Investments in innovations are the only way out of the crisis. Therefore, we are also automating and digitizing our internal value chain,” says Christian Thönes, Chairman of the Executive Board of DMG MORI AKTIENGESELLSCHAFT.

The heart of production in the new monoBLOCK Excellence Factory is an AGV transport system. The AGVs move the machines autonomously through the assembly stations at a continuous speed of 45 mm/minute. Optical navigation using the latest laser scanning technology ensures a continuous process. As of now, the complete model mix of the monoBLOCK series including all series with palette changer (DMC) and mill-turn-table (FD) is built in a flow assembly in 34 cycles – starting with basic assembly, to geometry, the machine cabinet and lastly, the final inspection.

“Today, our new monoBLOCK Excellence Factory in Pfronten already demonstrates what tomorrow’s production will look like. Using modern automation and digitization solutions, we consistently realign our locations to the production of the future,” explains Michael Horn, Executive Board member of DMG MORI AKTIENGESELLSCHAFT. “The driverless AGV transport system is perfectly integrated into the digital value chain of our production site. Compared to rail systems, the AGVs are a much more flexible solution, hence, optimizing the production infrastructure.”

The AGVs can also be freely navigated via remote control. The flexible timing of the machines ensures an uninterrupted and trouble-free flow during the assembly process. 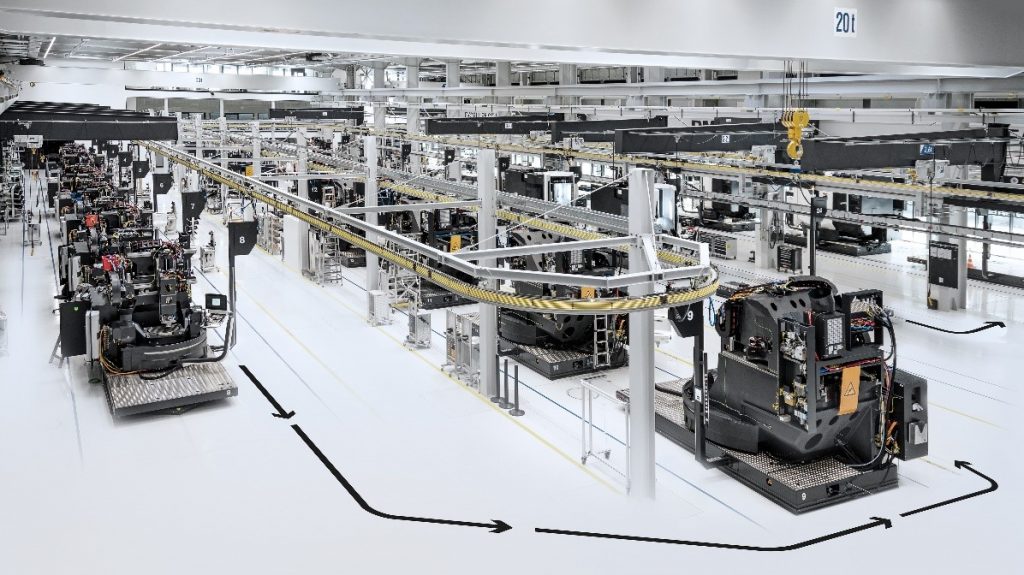 Digital and automated: the flow assembly with 34 AGVs in the new monoBLOCK Excellence Factory at DECKEL MAHO Pfronten increases productivity by 30%.

With cycle times of just two and a half hours, every monoBLOCK machine can now be assembled in just seven days. This corresponds to a reduction by 30 %. This is a significant leap in productivity, which increases the capacities at the site from 600 to 1,000 monoBLOCK machines per year. “Our goal was to increase space efficiency and to be able to produce the complete model mix of the monoBLOCK series in a highly flexible, waste-free and even more productive way,” says Reinhard Musch, Managing Director of DECKEL MAHO Pfronten.

Working in the monoBLOCK Excellence Factory has also undergone future-oriented changes: “We got our specialists involved in the design process of our monoBLOCK Excellence Factory from the very beginning, thus significantly improving all processes with regard to ergonomics and creating an optimal working environment to support our highly qualified specialists,” explains Musch.

The new monoBLOCK Excellence Factory also sets new standards in terms of digitization. TULIP is an important component in the flow assembly. The US start-up’s software enables users without programming skills to create their own applications quickly and intuitively. With the help of the no-code platform, DMG MORI has developed an app solution that shows employees the necessary assembly information for each cycle with machine-specific work plans. Assembly processes of newly implemented equipment or special options is aided by detailed drawings, pictures and video instructions.

TULIP also helps with upholding quality standards consistently: “Interactive checklists and inspection plans document the entire assembly process in real time and ensure continuous quality control during assembly,” explains Musch. Information is available in the TULIP app in real time – along the entire value chain: There is a connection to the existing ERP system in place as well as a network right through to the suppliers.

DMG MORI passes the increased productivity on to its customers: All prices for monoBLOCK models are reduced by € 10,000, and the accuracy package is also integrated into the standard. This results in a price advantage of € 30,000 for customers.