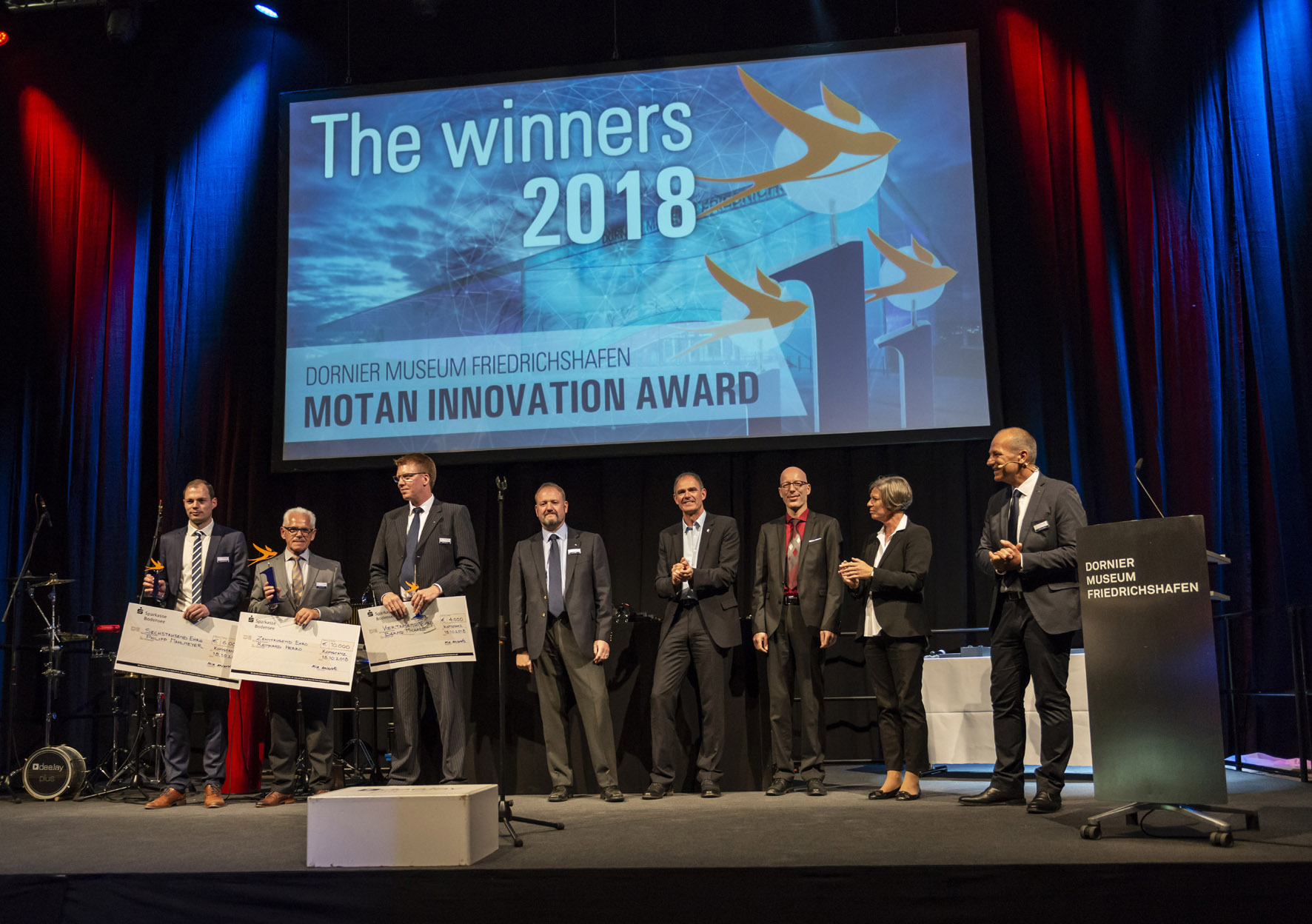 The winners have been confirmed: Three new ideas in the field of raw materials handling were awarded with the motan innovation award (mia) on 18th October 2018. The technology company motan runs the competition every two years to promote ideas and innovations that are too good to be forgotten.

The mia jury, a panel of four experts from universities and institutes in the field of plastics research, had short-listed six ideas, as finalists for the award in July after intensive evaluation. The three winning projects were particularly convincing in terms of innovation level, relevance for the practice in the plastics industry as well as feasibility and market opportunities, and prevailed over the other contenders. 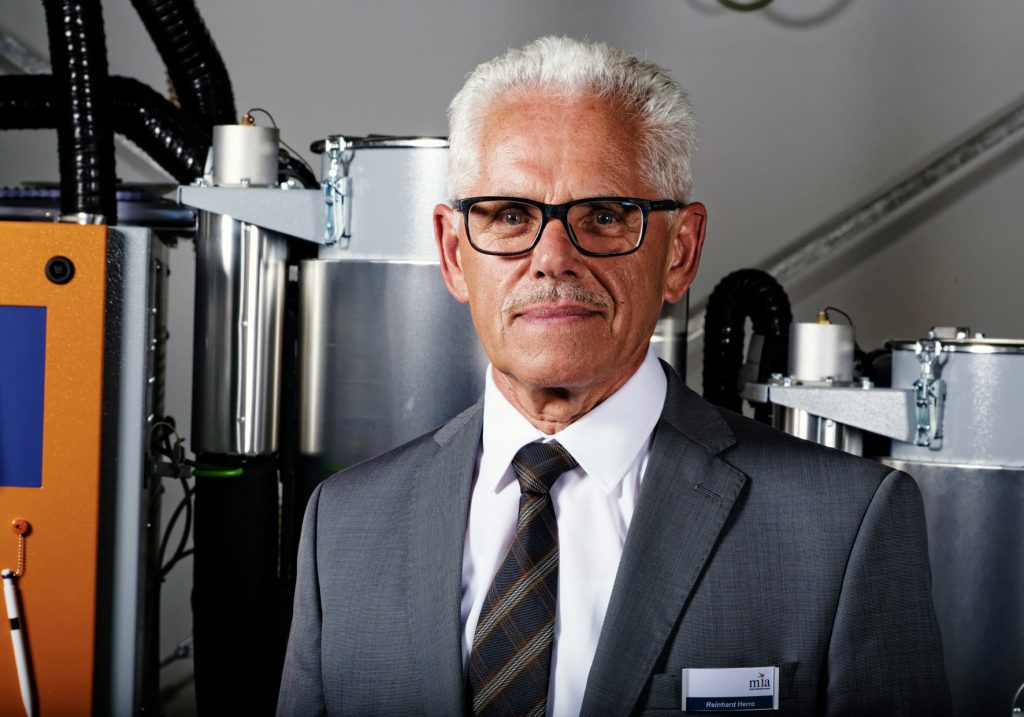 Gravimetric suction box gives Reinhard Herro first place
The gravimetric suction box developed by Reinhard Herro is a new system for throughput detection with batch traceability for pneumatic conveying systems. It measures all material throughputs directly at the material source and thus replaces the usual measuring procedure at the consuming unit typically a material loader. By means of a gravimetric dispenser integrated in the suction box, each batch of material is weighed individually before conveying and then automatically assigned to the designated machine. With only one measuring system it is now possible to measure and control the material throughputs of many consuming units. In addition, the gravimetric suction box opens up completely new possibilities for the control and monitoring of pneumatic conveying systems, as many processes are automated. For example, the optimum filling quantity for material loaders is automatically generated and overfilling is prevented. The jury also acknowledged that the increase in the degree of automation was accompanied by an increase in the reliability of the plants. Reinhard Herro receives a prize of 10,000 euros for his innovative idea. 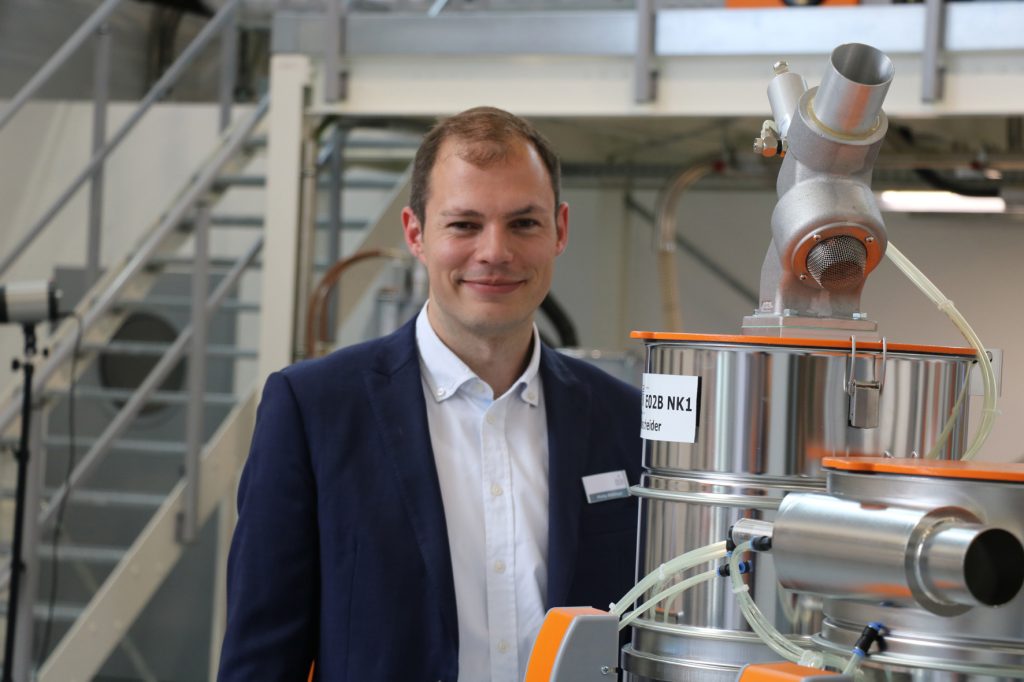 Philipp Mählmeyer achieves second place with his developed app
To be able to optimally serve large complex industrial plants requires a quick and precise retrieval of the current status information. The new app by Philipp Mählmeyer starts at this point: using clear, machine-readable codes (QR codes), which are attached to the aggregates, they visualize the required data on a mobile device. Thus, each operator can not only query status information easily, but also control the associated processes. For example, using a mobile device, mechanical adjustments, calibrations and service work can be carried out directly at the machine. A major advantage of Mählmeyer’s app: The installation effort and the costs are low compared to other systems, if the necessary system technology is already available and the controls can be addressed via a network. In addition, a sophisticated “right and role” system enables user-specific visualization on the mobile device. For example, a service employee will see different information compared to a plant operator. motan honours this project with a prize of 6,000 euros. 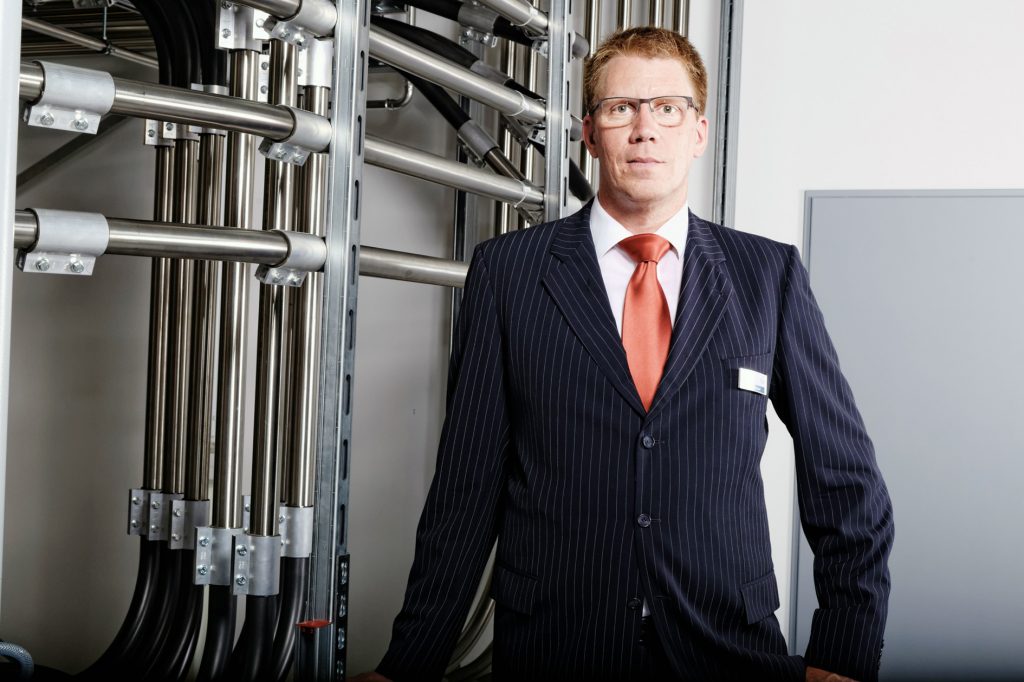 The system METRO-Lay: Bernd Michael gets bronze for his innovation
With the highly flexible “METRO-Lay” system, material feedlines can be laid in a very uncomplicated and efficient way. METRO-Lay is the name Bernd Michael give his idea, which is made up of the terms “METRO” (representative of all motan conveying systems) and “Lay” (as a reference to one of the world’s largest scaffolding manufacturer’s Layher). The development consists of two essential components: the Layher Allround scaffold system, which serves as a supporting structure for material feedlines, and newly developed plug-in modules, which ensure faster and more secure installation of material and vacuum pipework. The combination of these two components optimizes the construction of feedlines significantly. METRO-Lay shortens assembly times, reduces assembly costs and thus increases the project margin. Even human resources can be spared by the comprehensibly structured system. Bernd Michael can look forward to a prize of 4,000 euros.

Award winners in the Dornier Museum Friedrichshafen
Sandra Füllsack, CEO and Carl Litherland, CMO of the motan group and the jury members presented the winning trophies at the official award ceremony on 18th October at the Dornier Museum, Friedrichshafen, Germany. The prize money totaling EUR 20,000 is donated by motan holding gmbh, which also supports the winners in patent applications and further development of their innovations right up to market introduction.

mia-initiator and CEO of the motan group Sandra Füllsack explains her motivation for the award:“Innovation and capability are integral parts of our corporate culture. For us at motan the following applies: no good idea must be lost – neither to our company nor to the industry. Digitalization and scarcity of resources are changing the world and changing us. We therefore experience that the plastic world, like all branches of industry, reinvents itself. With the mia Award, we have created an instrument with which we can channel creative ideas and further develop them – for the future viability of our company and the entire plastics world.”

Press release from the motan Group