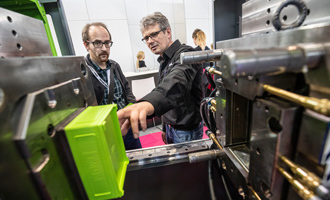 In its third edition MOULDING EXPO 2019 was once again the centrepiece of the German and European tool, pattern and mould making industry. Around half of the exhibitors come from the core area of this high-tech industry. The trade fair therefore offers a stable platform where exhibitors can exchange information and experiences with customers and suppliers, but also with their colleagues from the industry.

MOULDING EXPO is therefore well-established as a leading meeting point for the industry. According to Ulrich Kromer von Baerle, this is proved by two aspects: “The expertise of the visitors is well above-average, 79 per cent of them are responsible for making purchasers and decisions,” said the CEO of Messe Stuttgart. “30 per cent of the visitors also come directly from the tool construction and mould making sectors. The trade fair has become a marketplace, it has definitely arrived!“ According to the CEO of Messe Stuttgart, the objective is to bring people together. This has been successfully achieved at MOULDING EXPO – also not least due to the international accompanying programme. The visitors spent an average of 1.3 days at the Stuttgart Trade Fair Centre. In the opinion of Ulrich Kromer von Baerle, this proves that the offering is geared towards the needs of the industry.

At home in the key to markets

MOULDING EXPO is also becoming more important internationally. 12,943 trade visitors from 59 countries saw the products and services from 705 exhibitors in the middle of Europe’s strongest industrial region. 17 per cent of visitors came from abroad, e.g. Turkey, Italy and Portugal – all countries relevant to the tool, pattern and mould making industry. Foreign exhibitors use the trade fair, for example, to initiate and coordinate cooperation projects. One of these companies is Cavalier Tool & Manufacturing from the Canadian cluster in Windsor, which was represented for the first time as an exhibitor at the international trade fair for tool, pattern and mould making: “We are stronger and more efficient when we pull together with partners instead of competing against one another. We want to turn this philosophy into reality through our presence at the trade fair. Because the market is big enough for everyone,” said Brian Bendig, owner of the high-tech tool construction and mould making company with 150 employees.

For Kern Microtechnik, a manufacturer of CNC production centres, MOULDING EXPO represents both an opportunity and a challenge. Managing Director Simon Eickholt: “MOULDING EXPO attracts experts from tool construction, pattern and mould making companies who definitely come to our stand looking for solutions for specific projects. The leads that we generate here are first class. Also because tool construction companies place the highest possible demands on surface quality, on precise cutting of high-end materials and increasingly on automated solutions.”

Marcel Bestenlehrer, Managing Director of the polishing technology specialist of the same name, confirms that MOULDING EXPO is a platform for service providers and suppliers: “In my opinion, the trade fair is ideally positioned through its clear focus on tool, pattern and mould making. The event is also a genuine meeting point for the industry. MOULDING EXPO is exactly the right size and the distances are short: tool construction companies, their customers and service providers meet here for quick, spontaneous exchanges, even after the end of the trade fair,” said Bestenlehrer.

Different players get together

This year’s event again focused on the promotion of young people and advanced training. Steffen Ritter, a Professor at Reutlingen University, and a team of students produced the MEX give-awayfor the second time. It was injection moulded live during the trade fair: “The MEX BOX lunch box was sensational! People were queuing up. We received excellent feedback: firstly about the product itself and secondly – this is far more important – about the way in which we developed it.” Brainstorming, component construction, the criteria catalogue, mould concept and design: the students were personally responsible for all this. “The culmination is that the students learn how to ‘sell’ their product at MOULDING EXPO,” said Ritter. According to the Professor, this is a prime example of how different players are brought together at the trade fair.