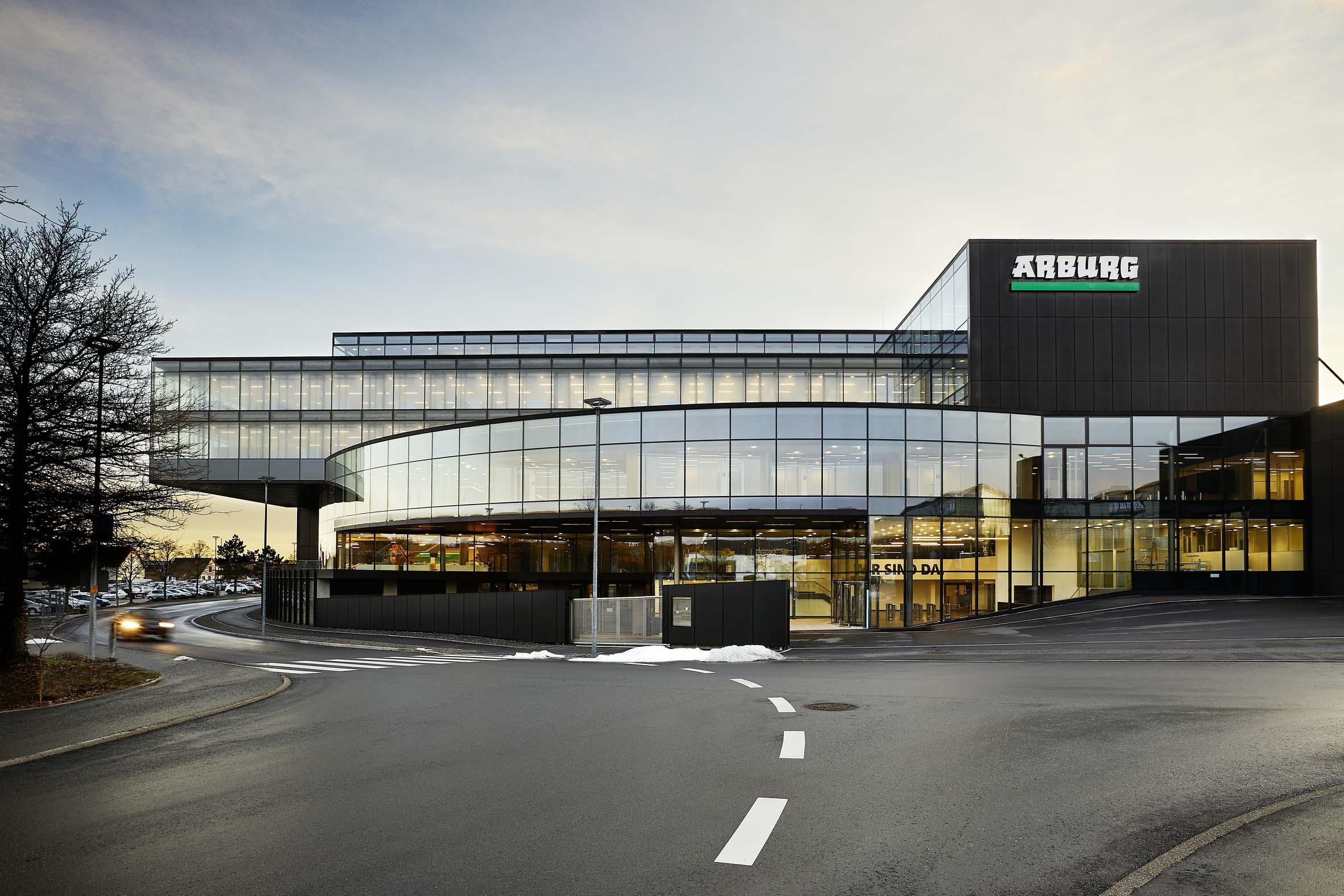 Friday, 6 March 2020 marked the opening ceremony of Arburg’s new Training Center at the company’s headquarters in Lossburg. The 170 guests in attendance included Dr Klaus Michael Rueckert, administrator of Freudenstadt district where Lossburg is situated; Lossburg mayor Christoph Enderle; plus representatives of the companies and institutions involved in the building’s construction. Arburg is setting new standards through the Training Center, affording customers the opportunity to benefit from cutting-edge digital training technology and machinery in the courses they undertake in the future. Measuring 13,700 square metres, the new building has increased the total usable space at the company’s German headquarters by just under five percent, taking it to approximately 180,000 square metres.

“Arburg is known for the premium range of services it offers and its focus on customers. We’re always thinking ahead and we set new standards time and time again. Whether we’re developing products and processes or working on construction projects, we create a blend of outstanding functions and aesthetic appeal – and we combine high-tech, innovative ideas with sustainability and a prudent attitude to resources”, stated Michael Hehl, who is responsible for Plant Development in his role as Managing Partner at Arburg. Hehl went on to explain the building’s layout: the training area alone spans two floors, while the remaining three floors house open-plan administrative offices and the new Arburg Health Center. 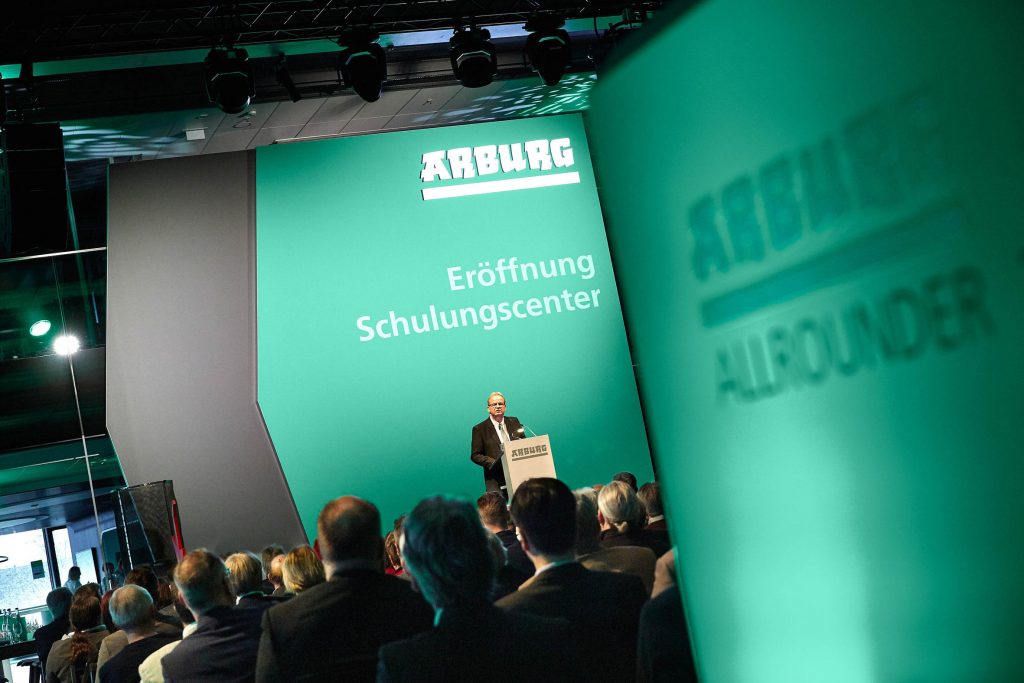 Investing in the future

“The fact that we have invested a double-digit million euro sum in a new Training Center is testament to just how important our customers and employees are to us”, continued Hehl. “Not only that, but it also illustrates our strong belief in Germany as a location in which to do business – and specifically how much we value Lossburg itself.” District administrator Dr Klaus Michael Rueckert and mayor Christoph Enderle supported these sentiments.

“Arburg’s new training center is a great asset with multiple purpose: competent training, health care and first-class jobs – all under one roof. Moreover, all surrounded by the unique natural landscape of the county of Freudenstadt. This is pure high-tech and pine scent” said District Administrator Rückert. “These new Arburg facilities will surely alert skilled personnel from near and far to motivate them and to work here. What more can a District Administrator wish for his county?”

“No other medium-sized enterprise has had as much of an impact on our district in almost 100 years as Arburg has”, said Enderle, who also praised the Allrounder injection moulding machines for their achievements in promoting the district to the wider world, and thanked the families who own Arburg for investing in Lossburg.

“This is a building of the future, where customers and other stakeholders can take advantage of the industry’s latest training resources”, outlined Michael Hehl. “Over these 2,200 square metres, we can now offer interactive, networked learning opportunities focusing on both theory and practice – right here in Lossburg.”

The ground-floor machine hall is the heart of the training area, spanning some 1,160 square metres and housing 15 electric, hybrid, hydraulic and vertical Allrounder injection moulding machines in sizes 270 to 820 – including a multi-component version. The machines chosen for the hall represent a cross-section of all the sizes and drive versions available in Arburg’s product range. Each injection moulding machine is equipped with a robotic system plus an IIoT gateway, and is linked to the Arburg ALS host computer system. There is also a Freeformer available for training in additive manufacturing.

While the training rooms themselves have a dedicated area on the first floor, theoretical concepts and their practical applications will be knitted more closely together in future. To achieve this, each of the eleven training rooms is equipped with a state-of-the-art smart board and every course participant will work on their own touch screen PC with a simulated control system. The PCs will also be networked with one another, enabling interaction, screen sharing and application sharing – making it possible to transfer the on-screen content from one computer to another and work collaboratively on the same document.

Digitalisation will take things even further, allowing data to be transferred from the training room’s smart board to a smaller board on each machine. This will enable participants to work together in real time, wherever they are and no matter what device they are working on.

“Wir sind da.” is Arburg’s brand promise, meaning “We’re there for you” – and the company is living up to this through not only its high-tech solutions and growing digitalisation, but also its focus on people and personal contact, particularly during after-sales support. Since the company first launched its courses in 1969, more than 120,000 participants in Germany alone have taken advantage of the extensive range of learning opportunities in order to tap fully into the potential that machinery, application technology and service hold. Today, the 30-strong training team organises 650 to 700 courses for more than 3,500 customers every year – and the numbers are rising.

The Training Center came into being on its 13,700 square metres of ground within three years: following the preparatory work in March 2017, the groundbreaking ceremony took place in July 2017 and the first training courses are set to be held from May 2020 onwards. In addition to the training facilities, the usable space on the site accommodates administrative open-plan offices with up to 160 potential workstations over two floors. Not only that, but an area of 750 square metres on the fourth floor is also home to the Arburg Health Center, a facility that helps employees benefit from simple, free, holistic solutions for promoting and maintaining health, with the support of two sports therapists.

Aesthetic appeal, functionality and careful use of resources

As well as housing 13,700 square metres of usable space, the Training Center extends to a height of no less than 31 metres. The architectural features of the new building resemble those of the Customer Center, which was inaugurated in 2009. “Incorporating lots of different functions into a building usually results in highly complex plans and structures”, said architect Siegfried Schmelzle from the firm Schmelzle+Partner, adding that this kind of approach is fairly typical of Arburg buildings. One example, he pointed out, is the projecting section at the Arthur-Hehl-Strasse side of the building, where a conscious effort has been made to continue the linear theme established by the multi-purpose building – a design that has already been incorporated into the Customer Center. “The whole ensemble along Arthur-Hehl-Strasse now consists of three buildings: the Customer Center, the multi-purpose building and the new Training Center”, explained Schmelzle.

The cantilevered section of the building located on the second floor and beyond reaches just under nine metres in height, while the section that projects over Arthur-Hehl-Strasse rises to 13 metres. The sheer immensity of the scale required double-T steel beams measuring 1.80 metres high, 1.80 metres wide, 25 metres long and 79 tonnes in weight. The Training Center’s glass façade is yet another highlight of its structure, with a total glass surface (including the aluminium lining) of approximately 7,200 square metres and curved panes on the ground floor.

The Training Center is also a shining example of resources and energy being used prudently. The double-glazed facade complies with the latest specifications set out in the German Energy Saving Ordinance (EnEV), and the building makes excellent use of Arburg’s proven building air-conditioning concept, which harnesses low temperatures and provides a complete air-conditioning solution. As with all the company’s buildings, the Training Center collects rainwater and uses it for the sanitation facilities and watering the outdoor areas. Waste heat from production is also used to heat the courtyard spaces. “It wasn’t possible to do this with asphalt previously”, said Schmelzle, “but Arburg came up with a really innovative solution in this case too, developing an entirely new system and constructing it for the first time.”

Looking back on the structural developments that Schmelzle+Partner and Arburg have achieved over the years, Schmelzle added: “We received our first commission in 1998, when the company had approximately 95,000 square metres of usable space. Once the assembly hall that’s currently under construction has been completed, that will grow to more than 200,000 square metres – which means that Arburg has more than doubled the size of its Lossburg site in the space of two decades.” Calling this achievement an unbelievable success story, Schmelzle expressed what a privilege it was for both his firm and the companies involved in the construction to play a part, and thanked the Hehl and Keinath families for the opportunity.