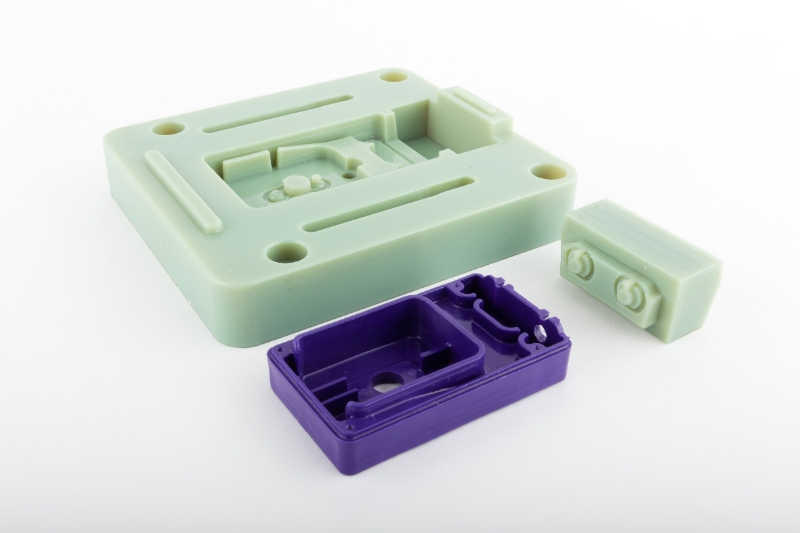 Plastic injection molds can’t be made in a minute, or even in an hour. But they can be 3D-printed in a day or so, which is far faster than the weeks or even months most in the industry have come to expect.

That’s great, you’re thinking, but really? A plastic mold? Why not just print the parts themselves and cut out the middleman, so to speak?

As it turns out, there are some very valid reasons to 3D-print a mold. There’s the aforementioned need for speed, for example. That might be all the justification necessary for a person who needs a hundred or so parts in a few days.

But before you run off to your computer, gung-ho to upload your latest product design, please remember the “hundred parts or so” caveat. That’s a reasonable quantity expectation for most 3D-printed molds, and it might be far less if you want parts molded from a high-temp polymer such as ULTEM or a glass-filled nylon. Around the 100-part threshold, your mold will be kaput and you’ll heading back to the 3D-printer to build a new one.

“As a rule, manufacturers have two options for rapid injection mold tooling: traditional metal molds, or very-low-run, typically 3D-printed, plastic molds,” said Alkaios Bournias Varotsis, technical marketing engineer for Amsterdam-based ‘Hubs‘. “With the latter, you’re generally limited to a basic, two-piece mold with no side actions; relatively simple part geometries; and, because their cooling capabilities are less robust than with metal molds, much longer cycle times.

“That last part isn’t all that important because of the lower production quantities involved with 3D-printed molds, but what is important is mold longevity. With abrasive or less-moldable materials, you might only get 10 pieces before the mold chips or breaks or wears to the point that part quality becomes unacceptable,” said Varotsis.

The other caveat is part design. As Varotsis noted, parts produced with 3D-printed, two-part molds are limited to less complex geometries. Undercuts and similar features, which are common with production mold tooling, must be generated through the use of hand-loaded inserts. The reason is that the automatically sliding side-action cores used in metal molds are not an option because of their cost and design complexity. Again, no big deal unless you’re planning on making several hundred parts, in which case the manual labor might become burdensome.

The mold design itself, however, is also different, requiring larger draft angles and greater care with the placement of ejector pins and gates. This must be done to avoid undue stress on the mold. None of this is meant to imply that 3D-printed molds don’t have their place—they do—only that they need a little extra TLC during and after the design process.

Varotsis said that Hubs continually works to expand its injection molding offerings to accommodate “a whole range of new possibilities that serve the needs of its engineering customer base.” 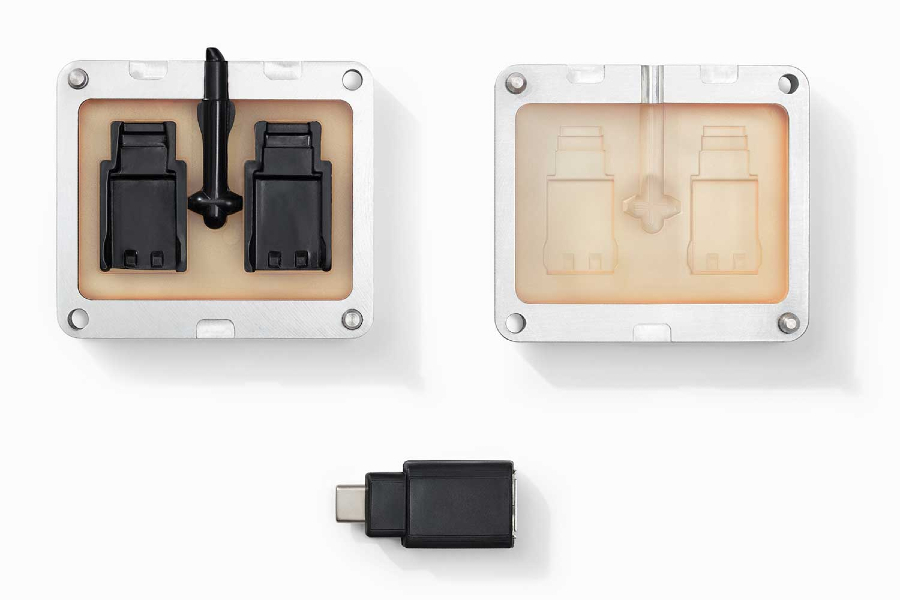 Hubs, an online service provider, works with a network of manufacturing partners to determine the most cost-effective and streamlined way to bring product designs to fruition. As such, it often recommends traditional steel molds as the best solution for its clients, especially for injection-molding end-use parts.

In his experience, customers that can wait three to five weeks for a steel mold will see better results. A manufacturer of sports equipment in Norway, for example, recently turned to Hubs to machine a whopping 29 molds in just 17 weeks for a series of polyoxymethylene and glass-filled nylon components. By waiting for steel molds, the Norwegian company took delivery of tools it could use for years instead of weeks or even days.

Of course, you can always use Hubs’ printing service to produce your own mold if you do not have access to an industrial printer, he added. That is what researchers at Eindhoven’s University of Technology, Netherlands, recently did to create patient-specific models of neonatal organs using PolyJet-printed molds.

To someone needing molded parts pronto, a week is an eternity. This is one reason why 3D-printer manufacturer Formlabs Inc., Somerville, Mass., continues to see a strong call for molds made using stereolithography (SL) technology.

According to Andrew Edman, industry manager for product design, engineering, and manufacturing at Formlabs, SL produces the fine detail and smooth surface finishes needed for plastic injection molding. It’s also known for its ability to produce patterns for investment casting, one of the first uses of the technology.

Edman agreed that speed is swell but identified another, often more important reason to use 3D-printed molds.

“The majority of cases I see are for manufacturing validation,” he said. “A customer might have a part that’s quite finicky to mold, for example, or looking at pulling the trigger on an expensive multicavity tool. Perhaps they’re making a consumer product with a Class A surface finish on all sides of the part, or they want to do mechanical or chemical testing. There are a lot of good reasons for getting your hands on a few dozen parts so you can make sure they’ll perform as planned before you commit to hard tooling.”

In terms of customer-use cases, Edman said most of his are hush-hush, but he did discuss the Google Advanced Technology and Projects lab wanting to validate a product’s design before moving into large-scale production of a wearable, over-molded electronics device.

The solution? Use one of Formlabs’ 3D printers and a high-temp resin to build a temporary mold, thus “bridging the gap between prototype and production, reducing turnaround time for a crucial component by 85 percent while saving over $100,000,” said Edman. 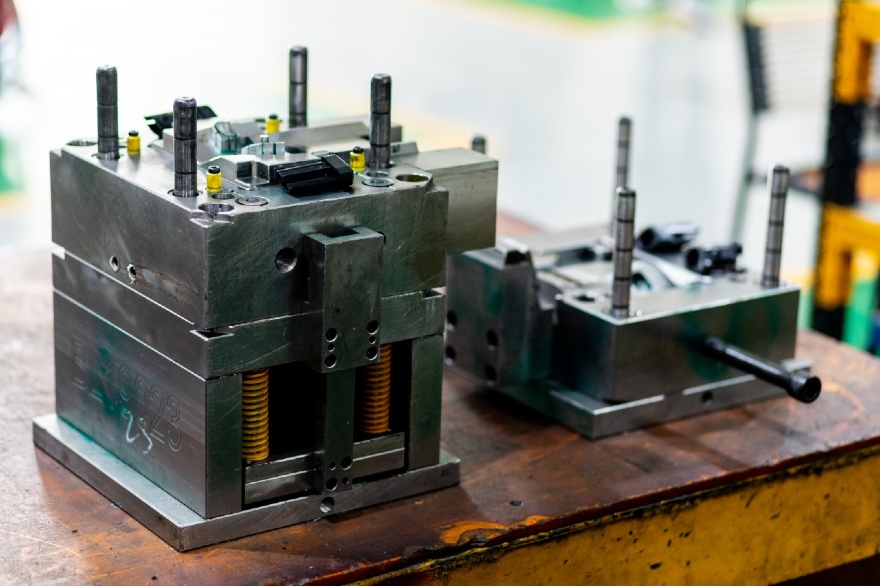 That’s a big wad of cash, for sure, but few companies are the size of Google, nor do they have to validate a mold that might cost more than a yacht. In some cases, Edman pointed out, it might be simpler to just print the parts, as suggested at the beginning of this article.

“It’s all a question of your reasons for building a mold and what you’re willing to put up with,” he said. “These are pretty low-cost tools made of relatively inexpensive material, so if you have any sort of production quantities, you could just plan on burning through a handful of printed molds. That said, an increasing number of companies are choosing to go the direct-print route, especially in light of increasingly faster print speeds and the availability of robust, end-use materials.

Eric Utley, additive manufacturing applications engineer at Protolabs Inc., Maple Plain, Minn., would like to point out that the choice of plastic injection mold tooling isn’t an either/or choice between steel and polymer. There’s also aluminum.

“One of the biggest issues with plastic tools is their higher coefficient of thermal expansion,” he said. “This causes them to grow and shrink during use, leading to dimensional variations of the finished part. We also find that plastic molds are unpredictable. You might get 20 or 30 shots out of one, but then again, it might break on the first part. So even though the mold itself might be less expensive to produce than one made of metal, it can end up costing far more in the long run.”

This is why most of Protolabs’ molds are made of aluminum, although, Utley said, steel might be used when molding high-temperature resins such as PEEK.

Depending on part complexity and the number of shutoffs and side-actions, molds often can be turned around in a few days, straddling the “gotta have it tomorrow” crowd and those willing or able to wait a month or so.

For your patience, you get a tool able to mold perhaps 10,000 parts or more, depending on the workpiece material, that has a price tag probably not a whole lot higher than a 3D-printed tool.

“They’re fast and inexpensive to make. Just remember that they’re limited. But if you need a reliable tool, one that’s able to handle most engineering-grade resins, and you don’t have thousands and thousands of parts to make, I’d go with aluminum,” said Utley. 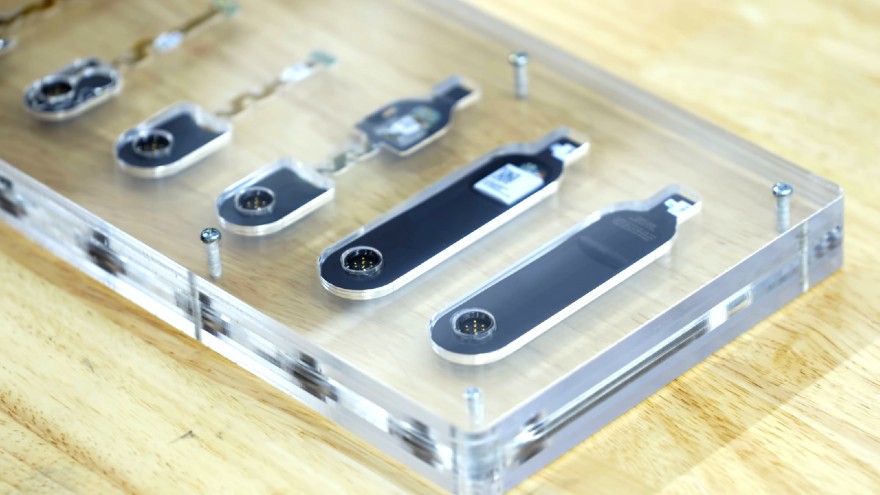 Author: Kip Hanson . Kip Hanson is a freelance writer and manufacturing consultant based in Tucson, Arizona. He has more than 35 years experience in manufacturing, machine tools, fabrication and ERP systems. You can reach him at kip@kahmco.net.