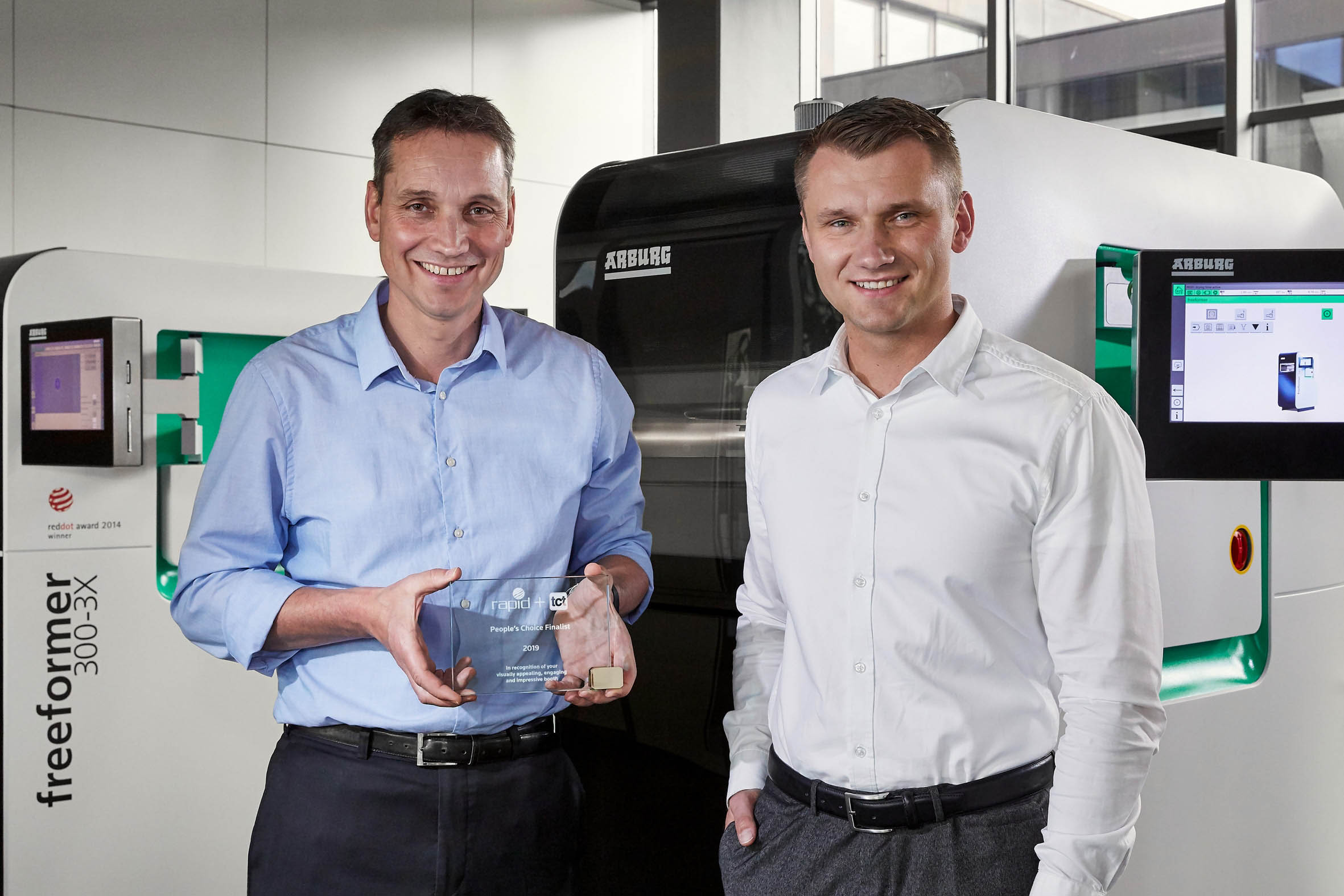 From 21 to 23 May 2019, more than 400 exhibitors and around 7,000 trade visitors attended the Rapid + TCT, the leading trade fair for additive manufacturing in the USA. On the last day, Arburg was honoured with the People’s Choice Award. The German machine manufacturer from Lossburg presented itself in Detroit with a stand covering 150 square metres. The public was fascinated by the two Freeformer exhibits, interactive stations and functional components and chose Arburg as one of the three best exhibitors.

“To us, the Rapid + TCT is one of world’s three important trade fairs for additive manufacturing. However, in this field we are still relatively unknown in the USA, contrary to our Allrounder injection moulding machines. Therefore we are particularly proud that our exhibition stand and the two Freeformers impressed the people in Detroit and that we were one of three exhibitors that received the People’s Choice Award” says Lukas Pawelczyk, who is responsible for global Freeformer sales at Arburg.

Martin Neff, Head of Plastic Freeforming, adds: “We made many high-quality contacts and had numerous good conversations. The trade visitors were unanimously captivated by the possibilities that our open system offers – in particular the diverse range of materials and the way in which the Freeformer can be used to produce own original plastics.”

The Rapid + TCT 2019 marked the first appearance of the Freeformer 300-3X in America. The three-component machine produced complex movable gripper fingers made of ABS, TPE and support material – in a single step and without requiring additional assembly effort. The second exhibit, a Freeformer 200-3X with two discharge units, turned TPE (Medalist MD 12130H) with Shore A hardness 32 into components with a flexible honeycomb structure. The Freeformer is currently the only machine capable of this kind of additive manufacturing of resilient hard/soft combinations and processing of very soft original TPE.

Arburg represented at three locations in the USA

The headquarters of Arburg, Inc in the USA is in Rocky Hill (Connecticut), where a Freeformer is also available for training and for manufacturing benchmark components. There are also two Arburg Technology Centers (ATC) in Irvine/California, and in Elgin (Illinois). Like all Allrounder injection moulding machines, the Freeformers are produced centrally at the German headquarters in Lossburg, where a large Arburg Prototyping Center (APC) is also in operation. The Freeformer in the APC manufacture sample parts from qualified standard granulates around the clock. Thus the Arburg technology consultants can react to customer requests faster and can conduct trials to determine whether the Freeformer is actually suitable for the prospective customer’s desired component, material and application.

An international sales and service network ensures first-class customer support at a local level: Arburg has its own organisations at 34 locations in 26 different countries and together with its trading partners, it is present in more than 100 countries. Its machines are produced exclusively at the parent company in Lossburg, Germany. Of a total of roughly 3,000 employees, around 2,500 work in Germany. About 500 further employees work in Arburg’s organisations around the world. In 2012, Arburg became one of the first companies to gain triple certification: ISO 9001 (quality), ISO 14001 (environment) and ISO 50001 (energy).