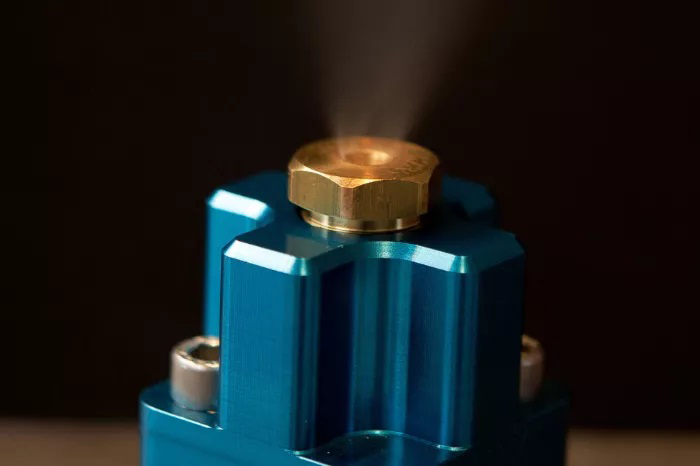 Release agents are of central significance in die casting technology. They affect the quality of the cast parts, the lifetime of the moulds and the length of the casting cycles. Release agents must be matched with the respective casting material and should meet high requirements in terms of economic efficiency and environmental compatibility.

A release agent, in many cases a wax and water emulsion, is sprayed onto the shaping surfaces of the mould by a spraying device that moves into the opened mould between two casting cycles. While the water evaporates, cooling the mould, the paraffin remains on the mould surfaces and generates the separating film. It prevents the melt from sticking to the mould and facilitates the removal of the finished casting from the mould.

In addition to their releasing and cooling ability, release agents must possess several other properties, such as a good wetting capacity, chemical stability at high mould temperatures, environmental compatibility and the ability to not clog the channels and nozzles of the spraying  system and the gaps between the moving parts of the mould. Water-dilutable release agents contain additives that cause the organic raw materials to form a stable mixture in the aqueous phase and protect die casting machines and moulds against corrosion. A biocide protects the release agent concentrate from microbiological attack and a decomposition associated with it. Release agents should also meet the demand for resource efficiency, so that for each casting cycle only small amounts are needed and the expenditure of recycling or disposal is low. When using the micro-spraying technology, further savings can be achieved in the amount of waste water which has to be disposed of. With this technology, not more than the liquid amount which is absolutely necessary for efficient releasing and cooling is sprayed onto the casting mould.

Regarding die casting, a distinction is made between the use of water-based and water-free release agents. They can be divided into three groups according to their basic raw materials [1]. The first group consists of mineral oils, semi and fully synthetic oils and oils obtained from renewable raw materials (ester oils). Oils have the property of spreading well on the casting mould, and ester oils also have a favorable effect on the CO2 balance. The use of such oils, however, is limited by the maximum permissible mould temperatures. The second group comprises synthetic waxes which are produced from crude oil. Their particular strengths lie in promoting a good flow of the molten metal and a good adhesion (adhesiveness) on the mould. This is important in order to avoid metal adhesions. Further advantages are a higher temperature resistance compared with oils and a good mould removal capability at higher mould temperatures. Wax-based release agents, however, tend to form deposits. A third group, which is relatively young, are release agents based on R-polysiloxanes. They adhere well to the mould surface, promote the flow of the molten metal and the formation of high-quality casting surfaces and ensure an easy removal of the die cast components even at very high mould temperatures. Unlike wax residues on cast part surfaces, residues of release agents based on an R-polysiloxane, which are due to its decomposition products, are relatively easy to remove [1].

As the evaporating water of a release agent cools relatively quickly the shaping surface of the mould,  cracks can form there which affect negatively the quality of the cast parts and the lifetime of the mould. The cooling effect – and thus the risk of crack formation – is diminished if the amount of water is reduced and applied selectively. For this reason, and because of the growing demands on the surface quality of die cast parts, micro-spraying technology is gaining in importance (Figs.1 and 2). As a result, the thermal loads are reduced and the mould lifetimes increased. Furthermore, the lower consumption of release agents helps to reduce the manufacturing costs. And additionally, liquid residues are avoided, which also results in an improved quality of the cast parts [3]. The further development of die casting alloys, the growing demands on the design and surface quality of die cast parts and the optimization of production processes inevitably have an effect on release agents. Therefore, manufacturers of release agents should be busy with interesting development tasks also in the future [4]. You will find the current status about the different release agents as well as the recent developments for the spraying of release agents at EUROGUSS 2020.

An insight into the state-of-the-art in pressure die casting and suggestions as to how die casting foundries can strengthen and expand their market position, but also around resource efficiency and environmental protection, will be provided at the EUROGUSS 2020 – International Trade Fair for  Die Casting: Technology, Processes, Products in Nuremberg, Germany, 14–16 January 2020. The EUROGUSS family includes EUROGUSS trade fair as well as the non-European die casting trade fairs China Die Casting, Alucast in India, EUROGUSS Asia Pacific in Thailand and EUROGUSS Mexico.