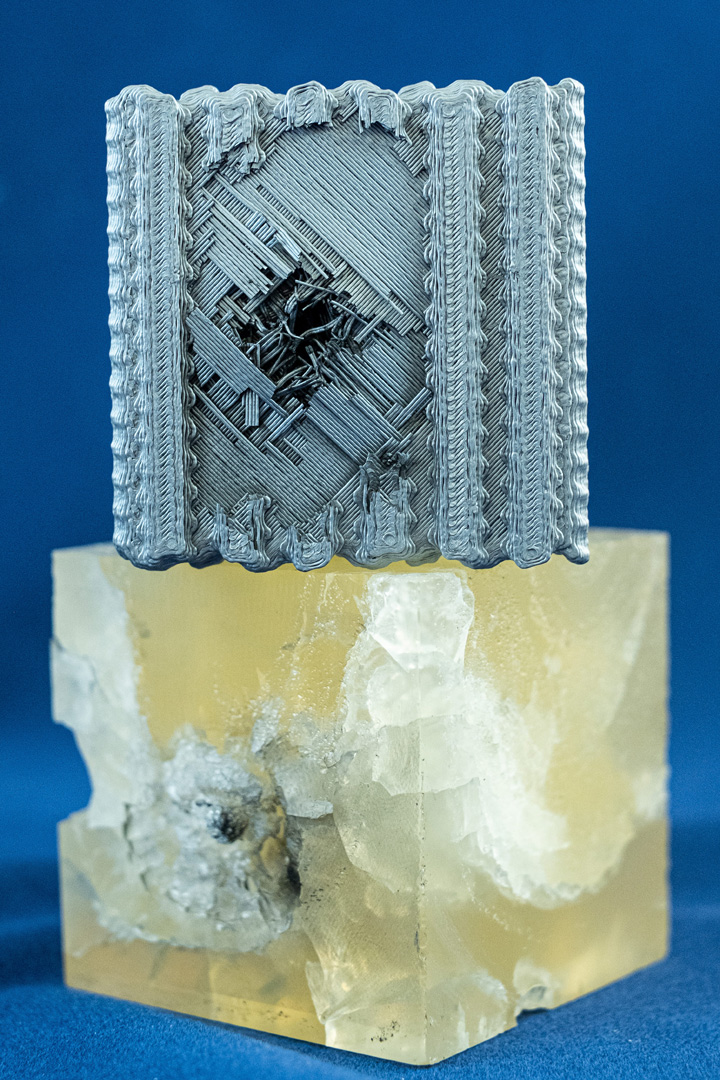 HOUSTON – (Nov. 13, 2019) – A lightweight material full of holes is nearly as hard as diamond. The mere dents left by speeding bullets prove it.

Researchers at Rice University’s Brown School of Engineering and their colleagues are testing polymers based on tubulanes, theoretical structures of crosslinked carbon nanotubes predicted to have extraordinary strength. 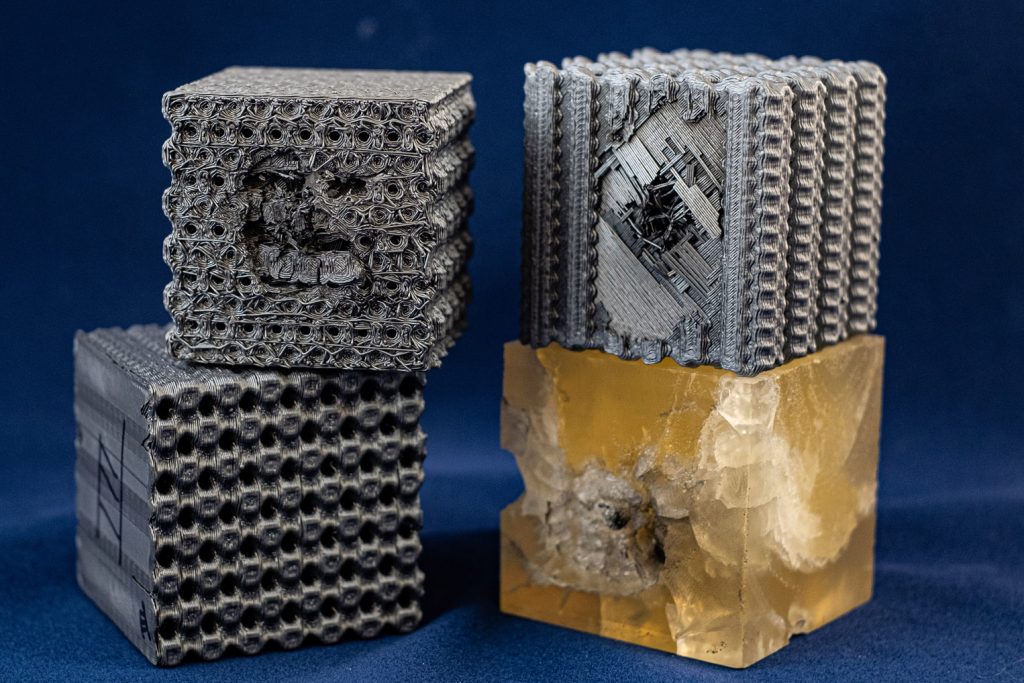 Tubulane-like polymer structures created at Rice University were better able to handle the impact of a bullet than the polymer reference cube at bottom right. The bullet stopped in approximately the second layer of the tubulane structures, with no significant structural damage observed beyond that layer. Bullets fired at the same speed sent cracks through the entire reference cube. Photo by Jeff Fitlow.

The Rice lab of materials scientist Pulickel Ajayan found tubulanes can be mimicked as scaled-up, 3D-printed polymer blocks that prove to be better at deflecting projectiles than the same material without holes. The blocks are also highly compressible without breaking apart.

As detailed in Small, the discovery could lead to printed structures of any size with tunable mechanical properties.

Tubulanes were predicted in 1993 by chemist Ray Baughman of the University of Texas at Dallas and physicist Douglas Galvão of the State University of Campinas, Brazil, both co-principal investigators on the new paper. Tubulanes themselves have yet to be made, but their polymer cousins may be the next best thing.

Rice graduate student and lead author Seyed Mohammad Sajadi and his colleagues built computer simulations of various tubulane blocks, printed the designs as macroscale polymers and subjected them to crushing forces and speeding bullets. The best proved 10 times better at stopping a bullet than a solid block of the same material.

The Rice team fired projectiles into patterned and solid cubes at 5.8 kilometers per second. Sajadi said the results were impressive. “The bullet was stuck in the second layer of the structure,” he said. “But in the solid block, cracks propagated through the whole structure.”

Tests in a lab press showed how the porous polymer lattice lets tubulane blocks collapse in upon themselves without cracking, Sajadi said.

The Ajayan group made similar structures two years ago when it converted theoretical models of schwarzites into 3D-printed blocks. But the new work is a step toward what materials scientists consider a holy grail, Sajadi said.

“There are plenty of theoretical systems people cannot synthesize,” he said. “They’ve remained impractical and elusive. But with 3D printing, we can still take advantage of the predicted mechanical properties because they’re the result of the topology, not the size.”

Sajadi said tubulane-like structures of metal, ceramic and polymer are only limited by the size of the printer. Optimizing the lattice design could lead to better materials for civil, aerospace, automotive, sports, packaging and biomedical applications, he said.

“The unique properties of such structures comes from their complex topology, which is scale-independent,” said Rice alumnus Chandra Sekhar Tiwary, co-principal investigator on the project and now an assistant professor at the Indian Institute of Technology, Kharagpur. “Topology-controlled strengthening or improving load-bearing capability can be useful for other structural designs as well.”

According to co-authors Peter Boul and Carl Thaemlitz of Aramco Services Co., a sponsor of the research, potential applications span many industries, but oil and gas will find tubulane structures particularly valuable as tough and durable materials for well construction. Such materials must withstand impacts, particularly in hydraulic fracturing, that can rubblize standard cements.

“The impact resistance of these 3D-printed structures puts them in a class of their own,” Boul said.

Co-authors are graduate student Prathyush Ramesh and research scientist Muhammad Rahman of Rice; Rice alumnus Cristiano Woellner, an assistant professor at the Federal University of Parana, Brazil; and Rice alumnus Shannon Eichmann and Qiushi Sun of the Aramco Research Center, Houston. Ajayan is chair of Rice’s Department of Materials Science and NanoEngineering, the Benjamin M. and Mary Greenwood Anderson Professor in Engineering and a professor of chemistry.

The Brazilian National Council for Scientific and Technological Development and the São Paulo Research Foundation also supported the research.

Located on a 300-acre forested campus in Houston, Rice University is consistently ranked among the nation’s top 20 universities by U.S. News & World Report. Rice has highly respected schools of Architecture, Business, Continuing Studies, Engineering, Humanities, Music, Natural Sciences and Social Sciences and is home to the Baker Institute for Public Policy. With 3,962 undergraduates and 3,027 graduate students, Rice’s undergraduate student-to-faculty ratio is just under 6-to-1. Its residential college system builds close-knit communities and lifelong friendships, just one reason why Rice is ranked No. 1 for lots of race/class interaction and No. 4 for quality of life by the Princeton Review. Rice is also rated as a best value among private universities by Kiplinger’s Personal Finance.