Silver anniversary: 25 years of Arburg success on the Czech and Slovak markets
08/10/2021 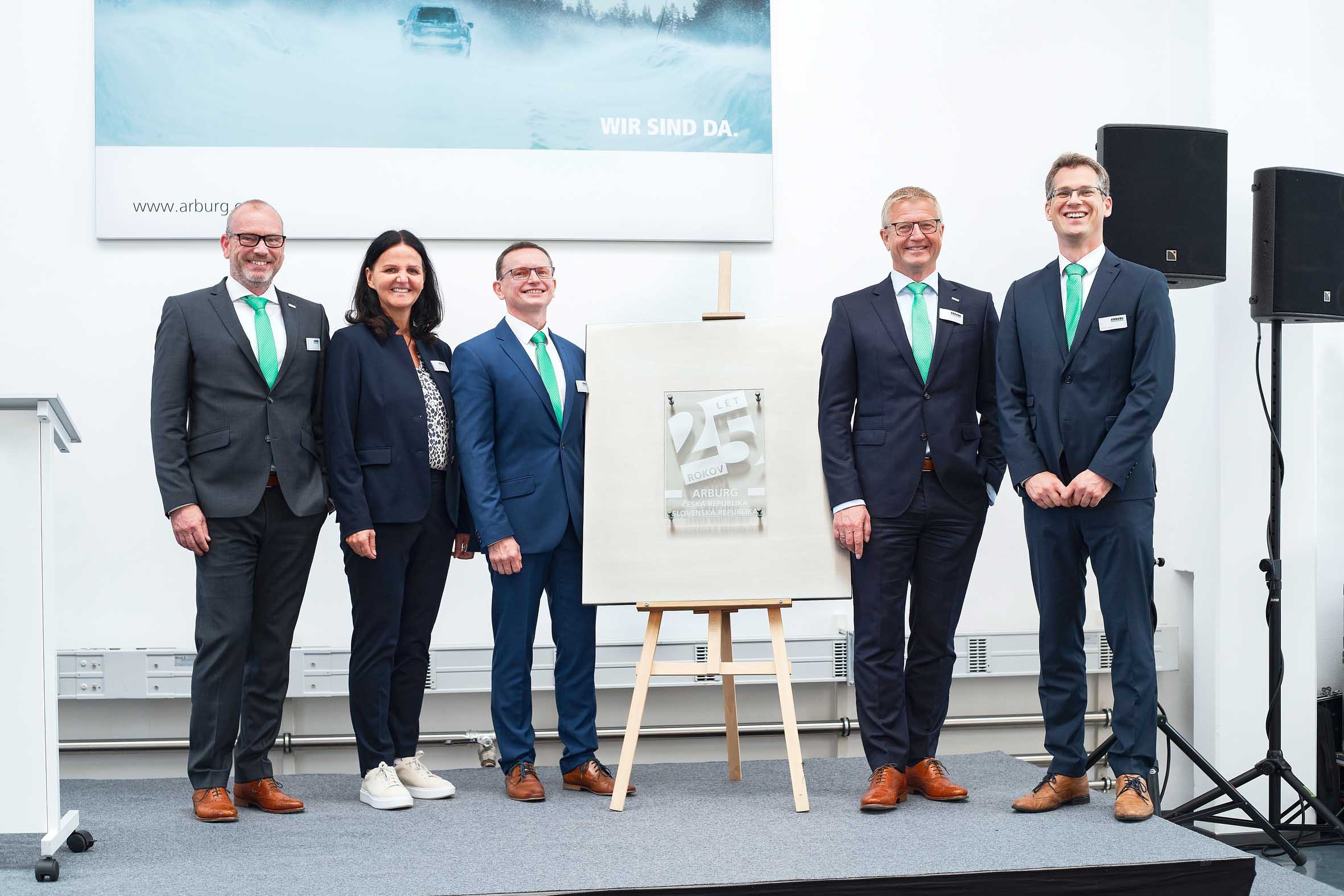 Silver anniversary: 25 years of Arburg success on the Czech and Slovak markets

Arburg’s subsidiary in Brno, Czechia, celebrated the 25th anniversary of its foundation on 30 September and 1 October 2021. On this special occasion, Arburg Managing Partner Juliane Hehl thanked Dr. Daniel Orel, Managing Director of Arburg spol. s r.o., and his 40-strong team for their huge commitment and loyalty. Gerhard Böhm, Managing Director of Sales and Service, looked back at how the subsidiary rapidly became a success story. In addition the around 150 invited guests had the opportunity to convince themselves of the efficiency of the machines during exciting live demonstrations. The anniversary programme was rounded off by a tour of the historic Spilberk fortress.

“I’m extremely impressed by what our team has achieved here over the last quarter of a century,” said Juliane Hehl in her address. Gerhard Böhm also sent his congratulations and the thanks of all at the Arburg parent company. “The role of Arburg Czechia in our international network of branches is outstanding,” he stressed. This was proven among other things by the further development of the Arburg Technology Centre to the Arburg Technology Factory (ATF) with comprehensive turnkey competence.

Thanks to the dedicated team at Arburg Czechia

In her address, Juliane Hehl praised the subsidiary team. She thanked Jaroslav Novak and Ilja Uhmann, two of its founding members. As managing director, Jaroslav Novak played a key role in setting up the subsidiary and developing it. Although he has been retired since 2015, he continues to support the team today in a consultative capacity. As his right-hand woman, the late Jindriska Jurneckova played a key role for many years. As service technician, Ilja Uhmann ensured the Allrounders ran smoothly for decades. Further guests of honour at the event included Tomas Haken, Jiri Zemla and Milan Prachar, who have worked at Arburg for more than 20 years. Juliane Hehl extended her heartfelt thanks for their outstanding commitment and decades of loyalty to ARBURG. Dr. Daniel Orel has been in charge of the subsidiary since 2015. “It was a huge challenge but he overcame it with bravado and, together with his stalwart team managed, to continue the success story,” came the praise from Juliane Hehl.

Successful development of the Arburg subsidiary

The story of the subsidiary has developed at a rapid pace over the past 25 years. The foundation of the subsidiary in the year 1996, the opening of a branch in Slovakia in 2000 and construction of the Arburg Technology Centre (ATC) in 2004 charts this rapid success story. As a result provision of service and consultations could be significantly developed and automation turnkey projects implemented too. The building was extended in 2013. Since 2016 there has been an assembly hall for turnkey systems where customer-specific turnkey systems are now designed, built, assembled and commissioned for functional and quality acceptances.

The subsequent expertise in plant technology that arose is now utilised in the neighbouring countries of Poland and Hungary too. “The branch has therefore developed into a hub for turnkey solutions and project management,” says Gerhard Böhm.

The guests were able to convince themselves of the efficiency of the machines and innovative applications during live demonstrations. The programme was rounded off with a tour of Spilberk fortress and a meal in a special ambience

An international sales and service network ensures first-class customer support at a local level: Arburg has its own organisations at 35 locations in 26 different countries and, together with its trading partners, is represented in more than 100 countries. Its machines are produced exclusively at the company’s German headquarters in Lossburg. Of a total workforce of over 3,300, approximately 2,750 people are employed in Germany. Over 550 people work in Arburg organisations around the world. Arburg has triple certification, in accordance with ISO 9001 (quality), ISO 14001 (environment) and ISO 50001 (energy).