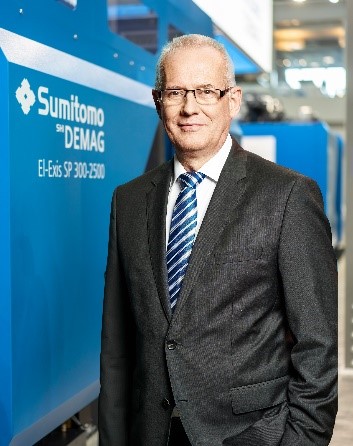 Gerd Liebig evaluates the success of global trade fair, signalling it as being a step towards normality.

Sumitomo (SHI) Demag Plastics Machinery GmbH, Schwaig – November 2022: Gerd Liebig, CEO of Sumitomo (SHI) Demag, concludes that K 2022 was overall a positive exhibition. Although the number of visitors to the world’s leading trade fair dropped by 21 percent compared to 2019, there was an increase in the volume of visitors to the German-Japanese mechanical engineering firm’s booth.

Additionally, the CEO claims that the quality of visitors was significantly higher. Liebig explains: “We attribute this increase in quality to our team registering a 20 percent rise in the number of purchase decisions. K 2022 was a big step towards normality. Because visits were scheduled well in advance, it enabled our team to plan and dedicate much more time to supporting the top purchasing decision-makers, all of whom came.“

The CEO cites rapidly escalating energy prices for the significant interest shown towards all-electric injection moulding machines, along with the comprehensive display of Sumitomo (SHI) Demag exhibits, as being the rationale for these pleasing developments. “The introduction of the new all-electric high-speed injection moulding machine PAC-E was a big attraction, playing to our strengths. Additionally, visitors showed great interest in our in-house automation SAM robotic series, plus smart solutions myConnect and myAssist,” states Liebig.

We recorded a high proportion of decision-making contacts, while the ratio of the purported ‘running audience’ visiting at the weekend and overall appeared relatively low. “The volume of visitors from Asia – especially China and Russia – meant that it was much more manageable,” says the CEO.

“Customers are increasingly seeking long term stable partners for the future and are interested in attractive industry solutions,” he sums up. Referencing the future status of trade fair events, fears that visitor numbers could further decline, coupled with weak project prospects, was refuted by Liebig. If anything, those that visited were serious decision-makers. Another benefit of this more manageable footfall was the noticeable improvements in transportation logistics, he notes.

Sharing his observations of the user industries, Liebig drew another distinction. “Even though economic uncertainties currently dominate, projects in electronics is currently very strong. Also running at a good level are the packaging, medical technology and consumer goods sectors.  In contrast, the automotive sector remains rather weak. Despite the dramatic mood and enormous uncertainty, Liebig would not be drawn into the threatening scenario forecast before K 2022 regarding the poor propensity to invest. “Although the mood was somewhat cautious, there are new projects still out there,“ he affirms

The effect on trade fair events feared by the resurgent corona pandemic were also absent. “The number of infections was manageable – for our stand staff it was around four percent,” Liebig reports. With daily testing, the company had the situation under full control.

Another special highlight at K 2022 was handing over the company’s 80,000th fully-electric IntElect injection moulding machine to Tyco Electronics. A partnership previously characterised by ups and downs, all consistently resolved and viewed as the best learning experience, the now very satisfied customer accepted its new machine in the amiable atmosphere of the show, says the CEO.

Effective November 1, 2022, new COO (Chief Operations Officer) was welcomed to the management of Sumitomo (SHI) Demag Plastics Machinery GmbH. Takaaki Kaneko replaces Shoichi Ohira, who has been COO and Head of Operations of the Group since January 15, 2019.

Sumitomo (SHI) Demag thanks Mr Ohira for his tireless efforts and the exceptional operational performance, all testament to his dedication.

New COO Mr. Kaneko, is a proven production specialist who has worked for the injection moulding machine division of the company’s Japanese parent company Sumitomo Heavy Industries for 27 years. He has also worked in Germany and was Managing Director in China . “My focus is on further improving production efficiency by strengthening flexibility and generally reducing delivery times,” says Kaneko.

The global development and production network of Sumitomo Heavy Industries and Sumitomo (SHI) Demag is comprised of four facilities in Japan, Germany and China with more than 3,100 employees. The product portfolio includes all-electric, hydraulic and hybrid injection moulding machines with clamping forces of between 500 and 15.000 kN. With more than 162,000 installed machines, Sumitomo (SHI) Demag is present in important global markets and ranks among the largest manufacturers of injection moulding machines in the world.