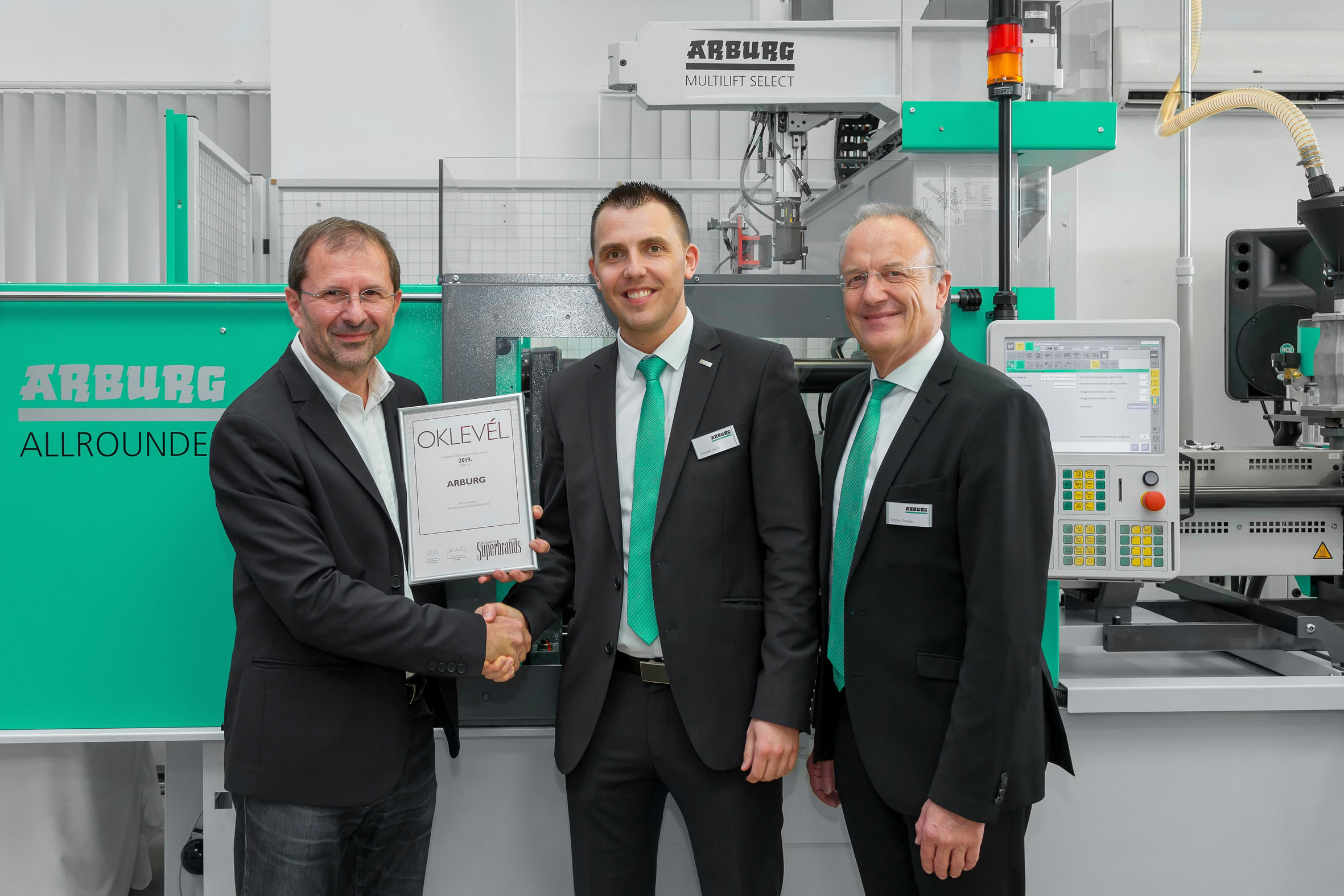 After winning its first award in 2014, Arburg’s subsidiary in Hungary was once again presented with the “Superbrand” award this year. Gábor Kövesdy, Brand Manager of the Superbrands programme, presented the award to László Csizmadi, Managing Director of Arburg Hungária Kft., and Stephan Doehler, Arburg’s Sales Director Europe, at the Arburg “Juniális” open-house event held in Budapest on 20 June.

According to the Superbrands definition, awards are given to companies around the world that “offer consumers significant emotional and/or physical advantages over their competitors which (consciously or sub-consciously) consumers want, recognise, and are willing to pay a premium for.”

Selected by a brand-independent panel of experts

Participation in the Superbrands programme is by invitation only and is offered only to the most outstanding companies in their respective industries. In Hungary, the Superbrands research team compiled a list of suggestions and analysed various sources including the trade database and professional associations, and added empirical results from the GfK Bisnode Risk Index. The resulting list of Hungary’s most valuable brands was discussed by a brand-independent panel of experts, who then selected the winners.

László Csizmadi was delighted to receive yet another Superbrand award: “This shows that the efforts put in by the Arburg team in Hungary over the years have paid off. We always try to set industry trends, both in terms of technology and in terms of consulting and services, to ensure that we retain our leading position.” The Superbrand award proves that Arburg Hungária Kft. is on the right track.

The Superbrands award has been presented worldwide for 26 years, with 89 countries presently participating in the programme. The award winners are presented and honoured in Superbrands yearbooks as well as on the Internet and in social media. Alongside Arburg, other globally known and prominent brands such as ABB, ATLAS COPCO, BASF, Bayer, Beiersdorf, Cisco Systems, Europcar, Festo, Husqvarna, Jungheinrich and Kuka Robotics were among the award-winning companies in Hungary in 2019.

An international sales and service network ensures first-class customer support at a local level: Arburg has its own organisations at 34 locations in 26 different countries and, together with its trading partners, is present in more than 100 countries. Its machines are produced exclusively at the parent company in Lossburg, Germany. Of a total of roughly 3,000 employees, around 2,500 work in Germany. About 500 further employees work in Arburg’s organisations around the world. Arburg has triple certification according to ISO 9001 (quality), ISO 14001 (environment) and ISO 50001 (energy).