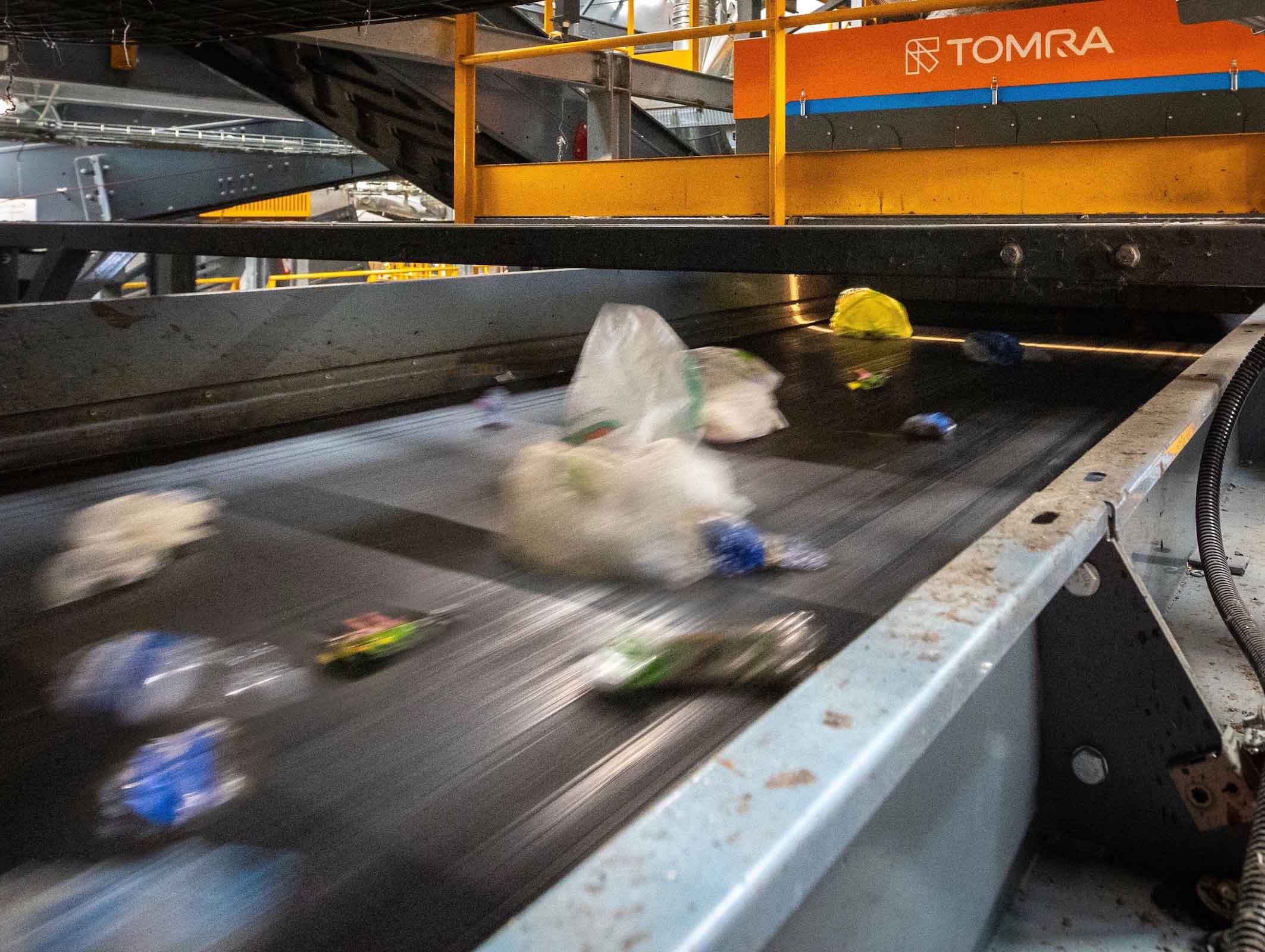 Based in Corsico in the Lombardy Region of Italy, MASOTINA S.p.A. operates one of Europe’s largest materials recovery facilities (MRFs) for the separation and recovery of plastic from municipal waste. The company uses 32 AUTOSORT® machines supplied by global sensor-based sorting specialist, TOMRA Recycling, to sort and recover high volumes of plastics primaily from single stream household waste collections, as well as some commercial waste. Thanks to the latest generation of TOMRA’s technology, MASOTINA is today reaping the benefits of ‘tailor-made’ plastic sorting solutions. 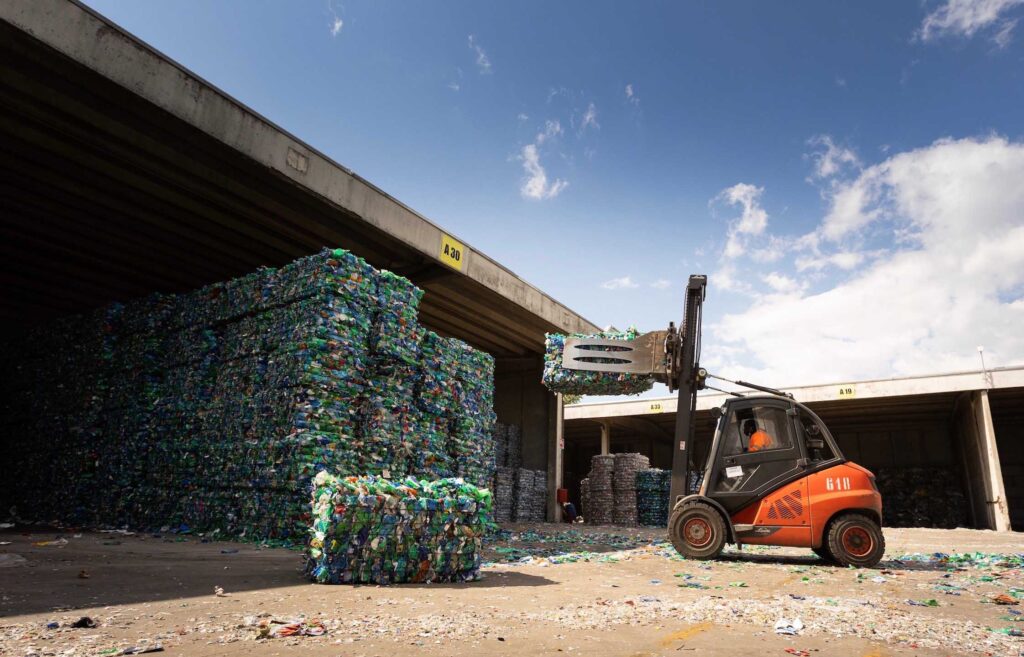 MASOTINA’s MRF was designed to treat municipal waste containing high volumes of plastic as a valuable resource, preparing it for subsequent reuse and recycling in line with the requirements of three Italian packaging and recycling consortia.*

The company’s Corsico MRF boasts 32 TOMRA Recycling AUTOSORT® across three lines, which together enable the plant to process 250,000 tons of post-consumer and commercial waste plastics annually. 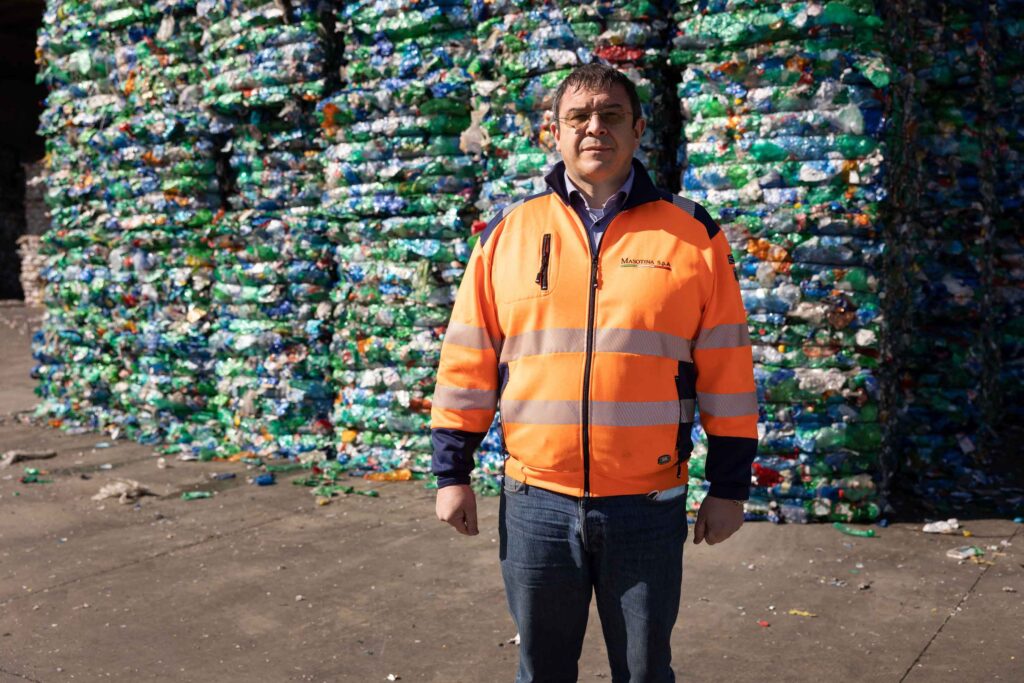 Sebastiano Chizzali, General Manager of Masotina Spa, comments: “When Pioneer Point Partners acquired the company in 2011, it invested heavily in management and technology, enabling the group to become a leader in plastics recovery and valorization.”

In 2014, TOMRA Recycling AUTOSORT® units were installed in a pre-sorting line and treatment line and later, in 2019, more units were added to support the addition of two further lines. A total of 32 AUTOSORT® are now installed at the plant.

“The plant’s design configuration is very flexible and is capabale of processing infeed material which comprises separated single stream post-consumer and commercial waste collections,” as Chizzali explains. “The lines are designed to sort and recover clean plastic fractions by both polymer and color. Sensor- based sorting technology was chosen to optimize the plant’s sorting processes. We chose TOMRA as our technology partner because of the company’s reputation for innovative, sophisticated and reliable technology, all of which are fundamental requirements for a partner which provides the core technology for our business.”

“Working with TOMRA we have been able to develop a plastics recovery facility which we can adapt in order to meet the differing requirements of our customers,” Chizzali continues. “For us, the relationship of trust that has been established with TOMRA is also important. They not only met our tight installation timeframes, but also helped us to develop and optimize our recovery processes effectively and efficiently.” 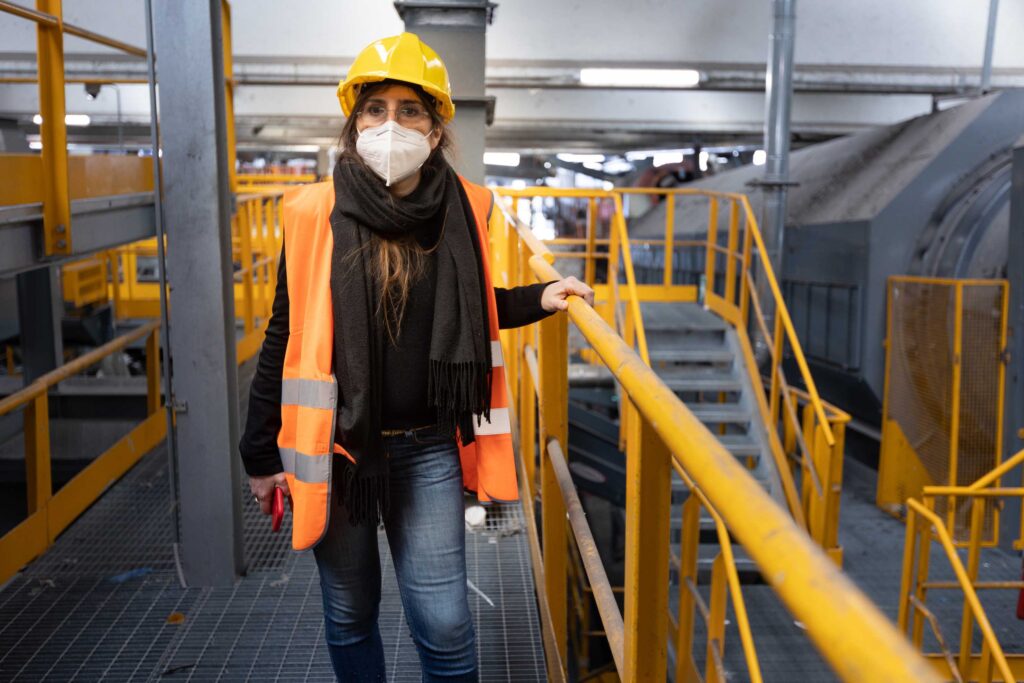 Francesca Romana Febbo, Quality, Environment and Safety Manager at Masotina, adds “We now have a considerable number of TOMRA optical sorters and we are very satisfied with their performance. There are 12 units on the original line from 2014, four on the new pre-sorting line (which includes the Tetra Pak line) and 16 on the new main polymers line.”

At present, the new main polymers line can process 15tph, the historical line between 7 and 10tph, and the Tetra Pak line 4tph, giving a total plant throughput of between 26 and 29tph. 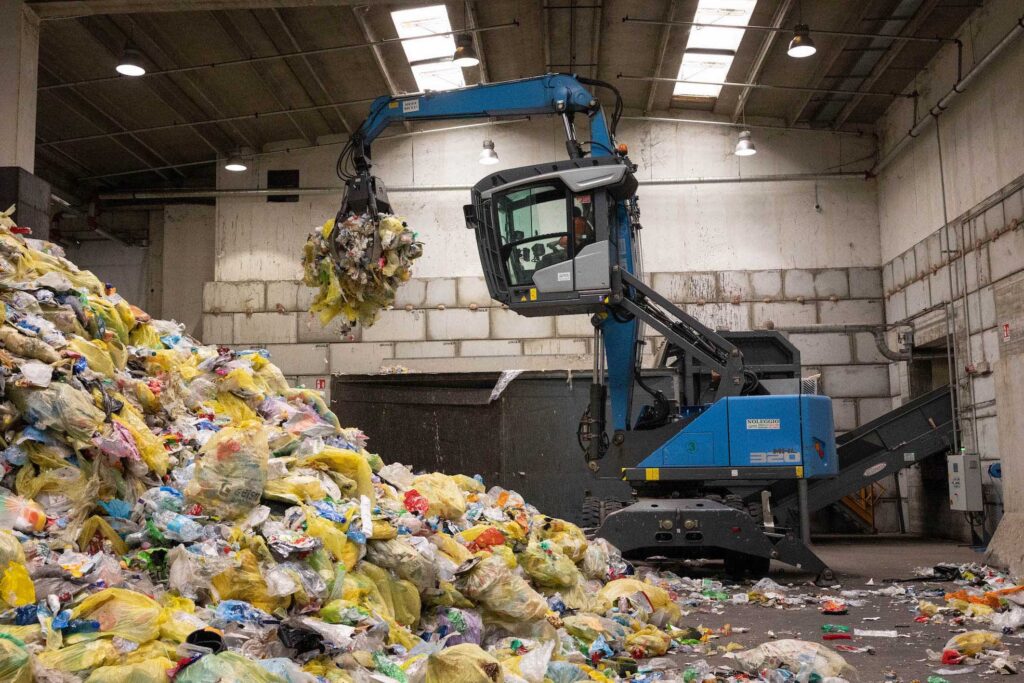 Thanks to the highly accurate sorting carried out by TOMRA’s AUTOSORT® units, in addition to recovering single-layer PET trays, the Masotina facility can also target and recover multilayer PET trays, with the end recovered fraction meeting the quality requirements set by Corepla for use as food-grade rPET. Corepla is Italy’s national consortium for the collection, recycling and recovery of plastic packaging.

Febbo explains: “One of the AUTOSORT® units is programmed to detect VPET (PET used in trays), allowing it to be sorted and separated from the PET used in bottles. We have found that, in addition to having the ability to accurately identify PET mono-layers, our recovery rate of both mono-layer and multi-layer PET trays has increased five fold. This is a key operational benefit for us as previously it was difficult to separate PET trays and we relied on manual sorting for this task.”

AUTOSORT® but even better – looking to the future

TOMRA Recyling’s AUTOSORT® machines combine NIR (near-infrared wavelengths) and VIS (visible wavelengths) sensors in a modular sorting system that enables large quantities of material to be precisely recognized and separated at maximum speed according to type and composition, resulting in high-purity end fractions. At the Masotina plant, NIR technology allows selection by polymer type and VIS selection by color (in the case of PET). 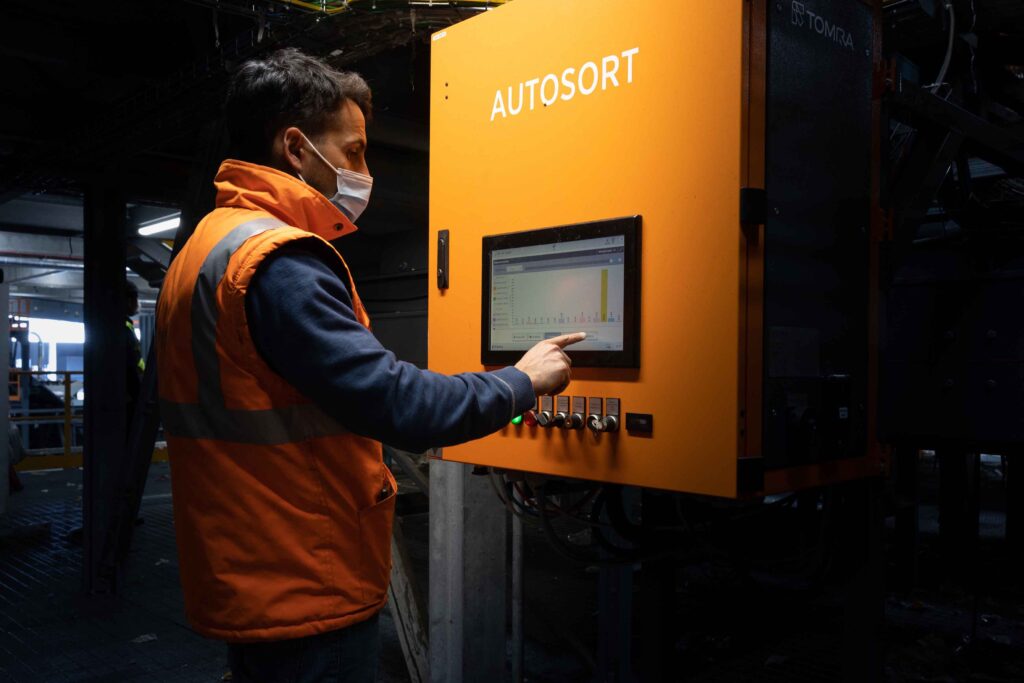 Recently, Masotina replaced four AUTOSORT® units with the latest generation of sorters. “The feedback has been very positive,” Chizzali explains. “We’ve tested the new grading system, which enables even more targeted customization and easier prioritization of material selections. We’ve not only found an increase in yield – in the range of 5 to 10% – but also a significant 2-3% quality improvement in the targeted fractions.”  Chizzali adds: “Feedback has been so positive that we plan to upgrade two further units to the new generation AUTOSORT® later this year.”

Masotina has also signed a contract for TOMRA Care’s maintenance package. Chizzal comments: “Our technicians are very satisfied with both the professionalism and the intervention times of TOMRA’s technical experts. The support we’ve had from TOMRA in defining the customization of the installed units has been key to the success of our customized material recovery.”

In the future, Masotina intends to close the plastics recycling loop by producing flakes of the main polymers.  To do this, the company is seeking authorization and is already considering a dedicated line with TOMRA technology to recover flakes. “At that point, we will also be able to test other applications, such as sorting fines material and using Deep Laiser technology to sort black plastics, which we hope to introduced later this year,” concludes Chizzali.

The latest generation of AUTOSORT®

With up to 320,000 scan points per second, TOMRA’s AUTOSORT® high-resolution sensors collect data on multiple characteristics at high speed to ensure accurate identification of a wide range of materials. To put this into context: TOMRA’s optical sorter can analyze and sort the equivalent of a soccer stadium covered in trash in less than 15 minutes.

TOMRA’s AUTOSORT® combines state-of-the-art features and technologies in one machine. Compact and flexible in construction, AUTOSORT® allows easy integration into existing or new installations. Thanks to FLYING BEAM® technology (the first NIR scanning system used point scanning), excellent homogeneous light distribution is guaranteed for better detection and monitoring across the entire belt width, distinguishing even the finest molecular differences of materials flowing along the line.

The latest generation of AUTOSORT® also incorporates SHARP EYE technology as standard, which ensures improved light efficiency and sorting clarity, facilitating the separation of difficult-to-sort fractions such as PET from bottles and trays.

TOMRA Recycling designs and manufactures sensor-based sorting technologies for the recycling and waste management industry. More than 7,400 systems are installed in 100 countries around the world.

Responsible for the development of the world’s first infrared sensor for waste recycling applications, TOMRA Recycling is a pioneer in the field and through its sensors recovers high-purity fractions from the waste stream that maximize yield and customer benefits.

TOMRA Recycling is part of TOMRA Sorting Solutions, which develops sensor-based sorting and process control systems for the food, mining and other industries. TOMRA Sorting is owned by Norway’s TOMRA Systems ASA, which is listed on the Oslo Stock Exchange. Founded in 1972, TOMRA Systems ASA has sales of approximately €985 million and employs more than 4,300 people.