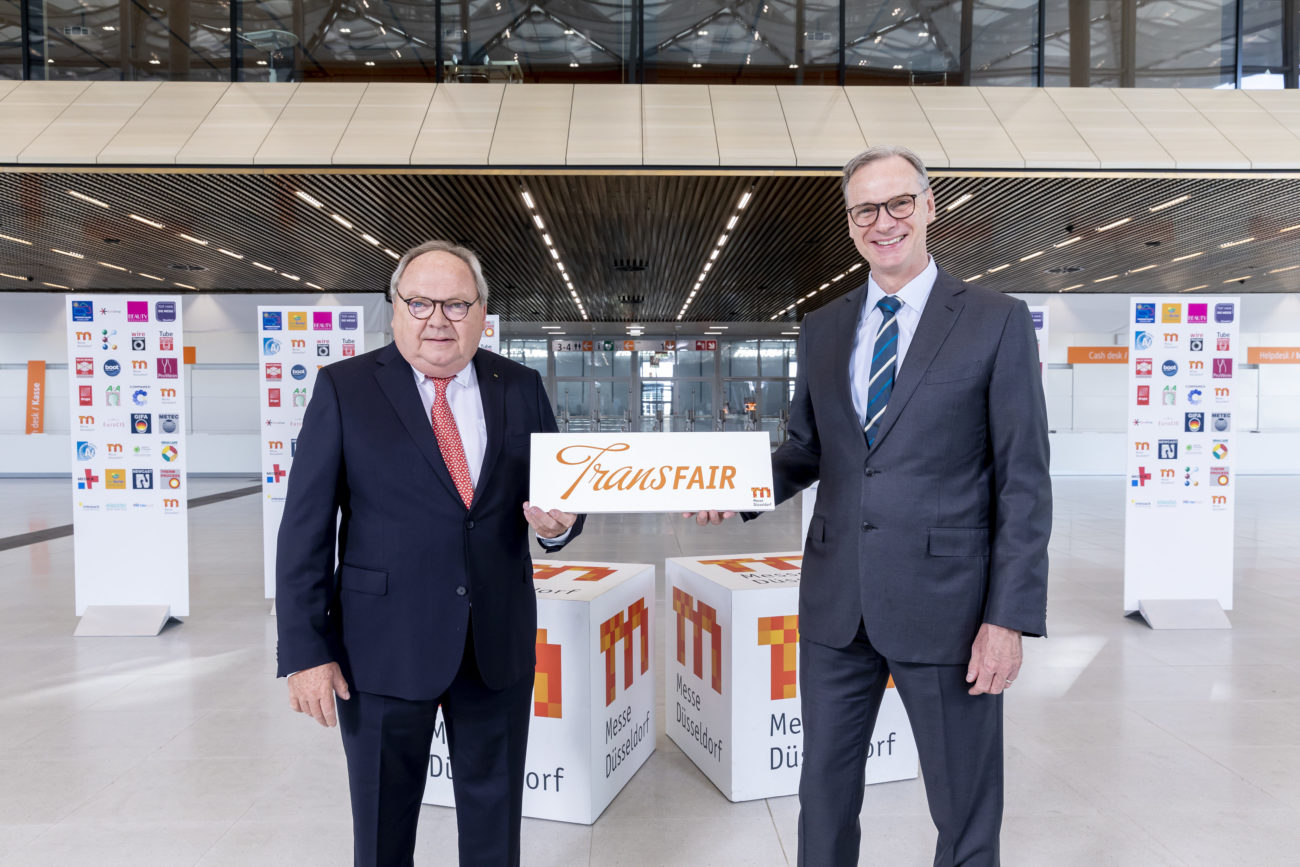 Werner M. Dornscheidt has left his mark on Messe Düsseldorf: its corporate strategy, its international outlook, its state-of-the-art premises, its digital transformation and its financial stability. After almost 17 years as a President & CEO – and serving the company for about 37 years – Werner M. Dornscheidt will now resign from his office on 30 June 2020. “Trade fairs are my life,” says the outgoing CEO. “What we have built up together with my team over all those years benefits the company today. While conditions are difficult at present, it is comforting to know that ‘my’ company is in good hands. The team is already busy working on a re-start and developing further digital add-ons so that Messe Düsseldorf will also remain the successful, reputable company in future that it is today. I have made my contribution.”

Profitable, subsidy-free management and financial stability are two trademarks of the Dornscheidt era. The Messe Düsseldorf Group closed the last full business year under his leadership with a sales increase of 28.7% to EUR 378.5 million (previous year: EUR 294 million). Group earnings after tax more than doubled in 2019 at EUR 56.6 million (previous year: EUR 24.3 million). In 2004 Dornscheidt took over as CEO of the company when the Messe Düsseldorf Group posted an ROI of 6.4% and a core capital ratio of 34.4%. Its ROI recently rose to 14.8% and its core equity ratio to 66%.

All of these are the best prerequisites for buffering the effects of the Corona pandemic. Wolfram N. Diener has served Messe Düsseldorf as Managing Director Operative Business since 2018 and will take over as Chief Executive Officer from 1 July 2020. “I am delighted at the trust placed in me. We can perfectly build on Werner Dornscheidt’s achievements and jointly rise to the challenges ahead,” says Diener who goes on to say: “Here in Düsseldorf we boast an inimitable brand profile that can be made even more successful through the drivers that are internationalisation and digitalisation; and what’s just as important: a powerful team.”

Internationality as a Win-Win Situation

Werner Dornscheidt has decisively driven both these themes. While in 2004 Messe Düsseldorf had 65 foreign representatives for 104 countries, today 77 foreign representations look after 141 countries. The share of foreign exhibitors in Düsseldorf rose from 58% to the recent figure of 73.4% and the share of foreign visitors from 34% to 37.1%. “All of these international guests benefit the city,” says Dornscheidt. According to a study by the Munich-based ifo Institute, Düsseldorf’s trade fair and congress business alone generates annual sales worth EUR 2.98 billion across Germany (in Düsseldorf: EUR 1.66 billion), securing 27,692 jobs (16,664 in Düsseldorf) and producing EUR 567 million in additional tax revenue (EUR 36.3 million). Numerous sectors of industry depend on the events – such as skilled craftspeople, exhibition stand construction companies, catering, hospitality, retail and local public transport. Dornscheidt therefore stresses: “It is all the more important that trade fair operations are resumed again quickly. My team is currently working on concepts for the re-start and I know it will succeed in doing so.”

The strategic re-orientation of the company spearheaded by Werner Dornscheidt decisively contributed to international growth. Düsseldorf’s four No. 1 trade fairs with the highest number of events organised abroad were grouped into the following “Global Portfolios”: “Processing & Packaging” comprising the packaging trade fair interpack, “Plastics & Rubber” encompassing the plastic trade fair “K”, “Health & Medical Technologies” including the medical technology trade fair MEDICA and “Metals & Flow Technologies” with the cable, wire and tube trade fairs wire and Tube – serving as the drivers of global expansion since that time.

On site Werner Dornscheidt focused among other things on the development of the Düsseldorf Exhibition Centre – in terms of technical facilities, functionality, convenience and architecture. This was done “with a view to staying both competitive and attractive for customers,” explains Dornscheidt. After the commissioning of Hall 1 boasting over 12,000 square metres as early as autumn 2019, this year will see the completion of the new South Entrance with its 20 m high cantilevered roof measuring 7,800 square metres. “In time for re-booting trade fair operations in autumn Messe Düsseldorf will have a new architectural highlight in the offing,” delights Dornscheidt. Up until the lockdown in March the adjacent Hall 1 had been fully booked from the outset.

Groundbreaker for the Digital Messe Düsseldorf

At the same time, Werner Dornscheidt also drove the further development of digital presentation possibilities. “On our online portals our trade fairs have long been in operation 365 days a year,” underscores Dornscheidt. Here Messe Düsseldorf makes it possible for its exhibitors to showcase themselves and their products in a multi-media format and make contact with other industry representatives. Messe Düsseldorf is constantly working towards making their customers’ content more attractive and user-friendly. The digitalisation of the trade fair format itself has gone hand in hand with the digital transformation of the company as a whole. “This pays off both during and after Covid-19,” adds Dornscheidt.

Projects of the Heart: “Deutsches Haus” and SAVE FOOD

On the occasion of interpack 2011 he founded the SAVE FOOD Initiative in cooperation with the Food and Agricultural Organisation of the United Nations (FAO), which was also joined by the United Nations Environment Programme (UNEP) shortly afterwards. The objective: to combat food losses in developed and less developed countries using economic means. Now more than 1,000 companies, research institutes and NGOs support the initiative. Commenting on this Dornscheidt says: “When you’ve been in the trade fair business for such a long time and have seen the whole world, you cannot turn a blind eye to social problems but have to assume responsibility. Talking about it is no good, you have to do something!”

Perfectly Positioned for the Future

In future, the fate of the company will fall into the hands of Wolfram N. Diener and his team. Erhard Wienkamp (Managing Director of Fair Management) and Bernhard J. Stempfle (Managing Director Finance & Technical Operations, Digital Strategy & Communication) will complete the Board of Managing Directors. Werner M. Dornscheidt is convinced of the new appointments to Board of Managing Directors: “Markets are shifting, the world is getting more international, digital and complex. The Covid-19 pandemic brings unprecedented challenges. Looking back on my many years of trade fair experience, Wolfram Diener, Bernhard Stempfle and Erhard Wienkamp are the ideal trio to steer Messe Düsseldorf through the Corona crisis and place it in pole position for the future.” 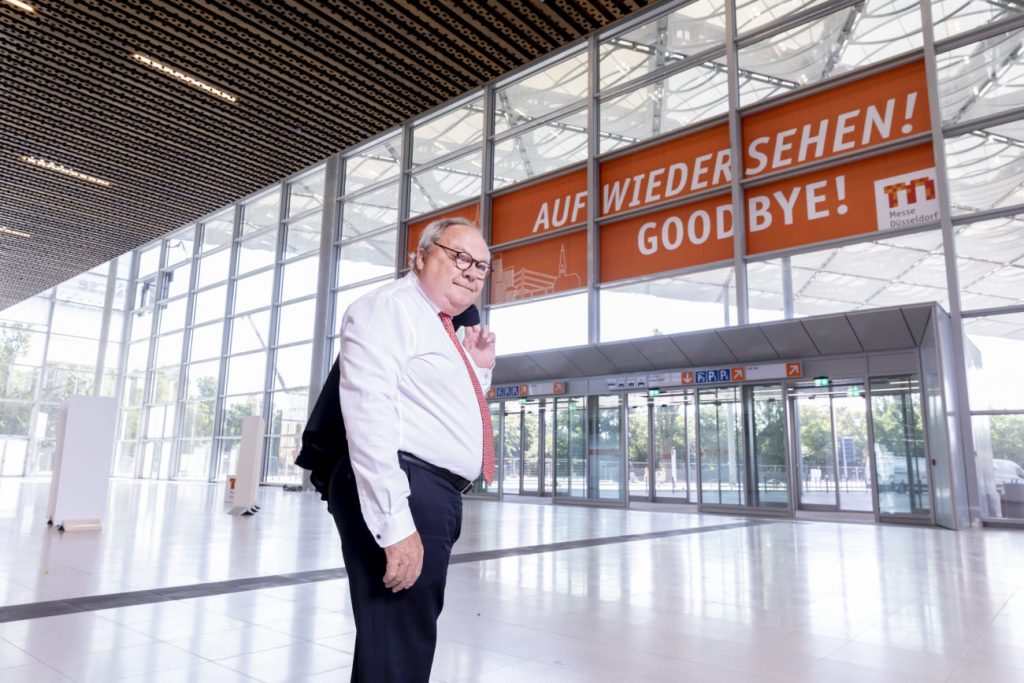 With revenue of EUR 378.5 million in 2019, the Messe Düsseldorf Group has maintained its position as one of Germany’s most successful trade fair companies. 29,222 exhibitors presented their products to 1.4 million trade visitors at events in Düsseldorf in 2019. Compared with previous events, this was an increase in the numbers of both exhibitors and visitors. Düsseldorf Exhibition Centre hosts around 50 trade fairs in five sectors of expertise: machinery, plants and equipment; the retail trade, trades and services; medicine and healthcare; lifestyle and beauty, and leisure. The trade fairs include 22 proprietary No. 1 events as well as, currently, 15 robust partner and guest events. Also, its subsidiary Düsseldorf Congress held over 1,000 conventions, corporate events, conferences and meetings in 2019, attracting around 374,000 delegates in all. In addition, the Messe Düsseldorf Group organises 75 proprietary events, joint events and contracted events in other countries and is one of the leading export platforms in the world. Proprietary events in Düsseldorf attracted around 73% international exhibitors and 37% international visitors in 2019. The group runs a global network of 77 foreign representatives for 141 countries, including 7 international subsidiaries.