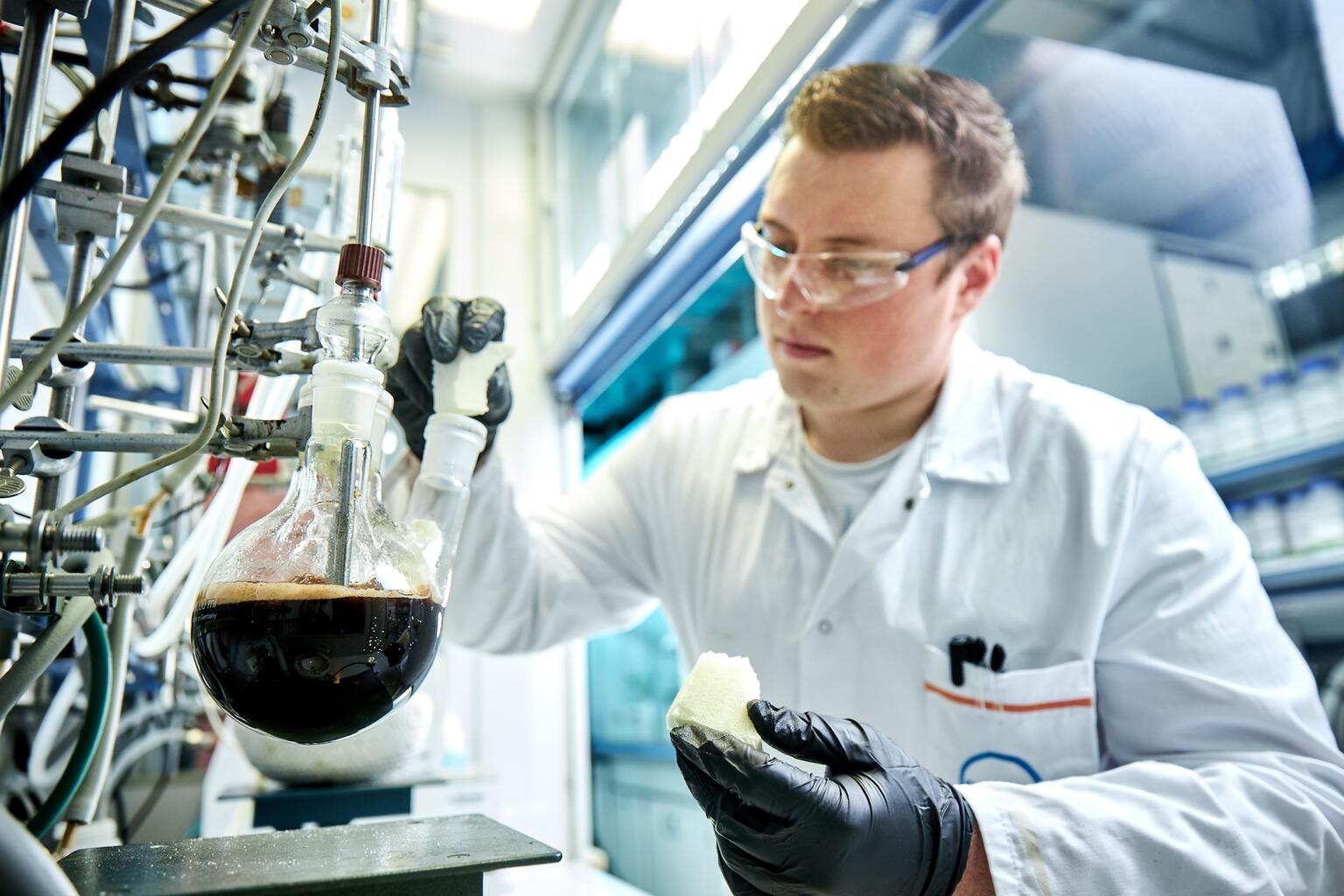 Mr. Steilemann, your company has made it its goal to completely replace crude oil as a raw material in the future. How do you intend to achieve this?

We are determined to fully gear Covestro towards the circular economy, which in particular means to keep the element carbon within the loop and no longer release CO2. We want to achieve this by no longer obtaining carbon from fossil sources such as crude oil, but from renewable resources, such as waste, biomass and even CO2 itself. This is a paradigm shift, a veritable raw material revolution, not only for the chemical and plastics industries, but also for numerous other climate-intensive sectors.

What role does energy supply play in closing the loop for plastics?

Here you are addressing the second core element for a resource-efficient circular economy. That means – in addition to renewable raw materials – we also need renewable energy. Covestro will gradually convert its sites worldwide to green electricity. In Germany, Belgium, and China, we have already secured wind and solar capacities from energy suppliers for this purpose. When I look at the entire German chemical industry, which wants to become climate-neutral by 2050, tremendous amounts of renewable energy will have to be produced at low prices in the future. 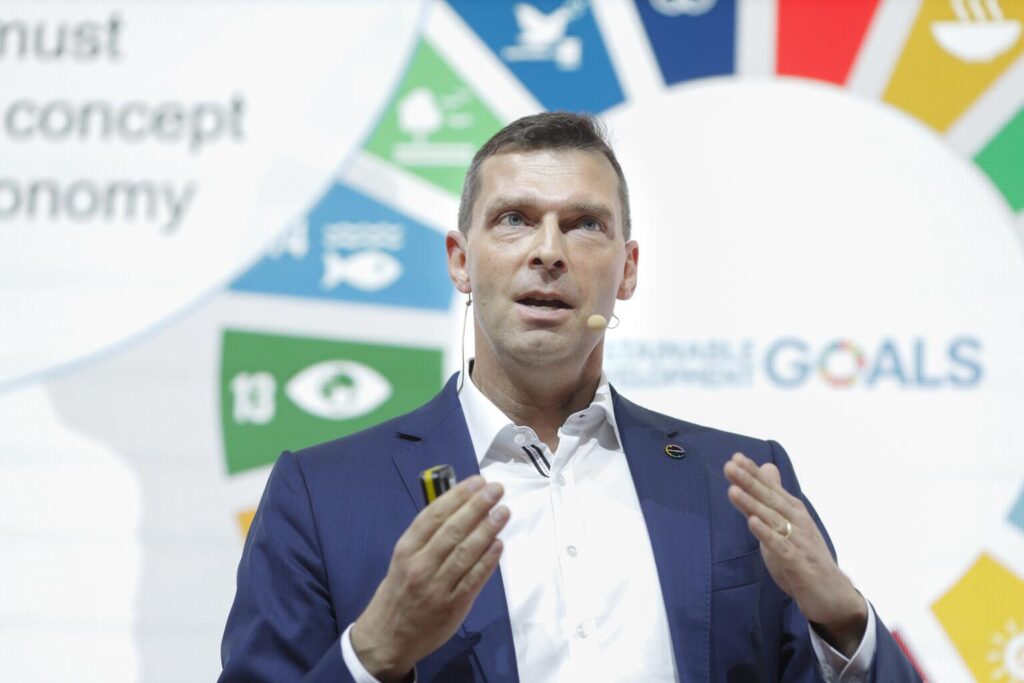 Plastics have a bad image, especially in Europe. Does this affect the business of a plastics manufacturer like Covestro?

The world is becoming more sustainable and more digital. For this reason, our high-quality plastics and plastic components are needed, and it’s why they are in demand. Take energy-efficient construction for example: here, the demand for insulation material is picking up significantly. We therefore expect demand for the important insulating foam ingredient MDI to rise more strongly in the coming years than previously planned, by an average of six percent. But many other important topics – from electromobility to digital infrastructure and renewable energies – would not progress without innovative plastics.

What can manufacturers do to improve the public image of their material?

I think that many industrial sectors should make one thing clearer in a trusting, empathetic dialogue with the general public, namely that humankind can only solve the numerous challenges it faces through future-oriented technology and suitable materials, of which plastic is clearly one example. On the other hand, of course, we must not only emphasise their benefits and necessity, but also address the drawbacks, that is the concern about the environmental impact of plastics.

And what can they do to reduce the underlying problem of large patches and swathes of trash in the oceans?

The pictures of huge swirls of waste, polluted beaches and dead sea creatures cannot fail to leave an impact on people. Things cannot and will not go on as they have been until now. First and foremost, we have to tackle the root of the problem. However, this root cause is not so much plastics per se, but rather the general handling of waste, which must change in many parts of the world. An international alliance of companies, the Alliance to End Plastic Waste, of which Covestro is a member, is tackling this problem. The partners also provide support for waste disposal and infrastructure development and want to enable local people to establish and expand good waste management, and they do so within the framework of a comprehensive circular economy.

A lot of research is currently being conducted in the field of chemical recycling. How complex is this process and what is the current status quo?

For many types of plastics, conventional mechanical recycling is reaching its limits. We will overcome these by chemically dissolving waste, breaking it down into its molecules, and using these in turn to form new molecular chains and new plastics. This is the only way to recycle plastics on a large scale. Of course, this is still a long way off. The first step is to enhance the technology and test it on an industrial scale. Covestro, for example, has been operating a pilot plant since the beginning of 2021, in which we are advancing a ground-breaking new process for the chemical recycling of soft foam for mattresses. If it catches on, it could mark a turning point, meaning mattresses would no longer need to be incinerated or deposited in landfills.

A functioning circular economy also needs a sensible political framework. What do you expect from the new federal government here in Germany?

First and foremost, I expect the coalition agreement to realise their promise to make the expansion of renewable energies a central project of the government’s work. The snail’s pace at which things have progressed over the previous years would drive anyone to despair. But I’m an optimist though, and that also extends to the coalition partners’ other plans, which coincide with my wishes and those of our industry for a more streamlined state, a digital revolution, a modern infrastructure and much more besides. We’ll take the coalition government at their word: dare to bring about more progress. Whatever the case, the chemical industry will certainly be on board.

Industry interviews on the road to the K:

The world is facing major challenges: Climate change must be fought; the environment must be protected, and resources must be conserved. It is also important to make good use of the opportunities offered by digitalisation. The plastics industry has a key role in this process because plastics are ubiquitous in the world.

Climate protection, digitalisation and the circular economy are therefore also the three major topics at K 2022, the world’s leading trade fair for the plastics industry. To get in the mood for the industry meeting in autumn 2022, the VDMA is letting representatives of the plastics machinery industry and all other stakeholders in the sector have their say through weekly interviews.

More than 200 companies are members of the trade association, covering over 90 percent of the industry’s production in Germany. Ten percent of our member companies come from Austria, Switzerland and France. German member companies represent a turnover of 7 billion euros in core machinery and 10 billion euros including peripheral technology. Every fourth plastics machine manufactured worldwide comes from Germany in terms of value; the export quota is 70 percent. Ulrich Reifenhäuser, managing partner of Reifenhäuser GmbH & Co KG, is the chairman of the trade association.